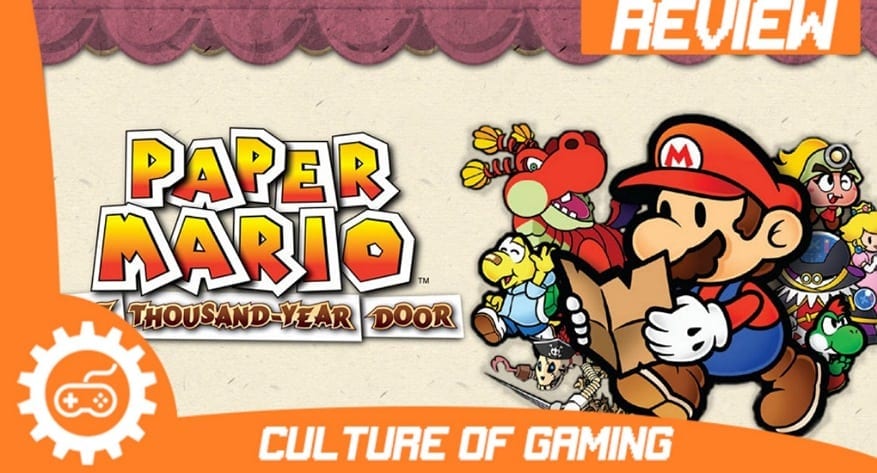 Paper Mario: The Thousand Year Door originally released on July 22nd 2004 in Japan, and later that year released internationally. The beloved RPG was developed by Intelligent Systems for the Nintendo GameCube and was published by Nintendo themselves.

The developers have been involved with the spin-off series since its beginning on the Nintendo 64, and hasn’t missed a title yet. They’ve slowly evolved the series from a turn based RPG, into a more stylish action adventure title.

Paper Mario: The Thousand Year Door is the second game in the franchise, and the last turn based RPG. To this day it considered the best title in the series, and one of the best GameCube games ever made.

Thicker Than a Piece of Paper

The story of Paper Mario: The Thousand Year Door is simply phenomenal. In it you play as various characters. Primarily Mario, but at the end of each chapter you have a short segment playing as Princess Peach and King Bowser.

The story begins with Mario receiving word from Princess Peach about a map she found, asking him to meet her in Rogueport, a town in the Mushroom Kingdom. Unfortunately Princess Peach has gone missing. It turns out she was kidnapped! Surprisingly, not by Bowser. Instead a mysterious group of villains called the X-Nauts took her.

This leads Mario to hunt down the Crystal Stars. They’re the key to opening or closing the Thousand Year Door. Behind which an all powerful demon resides, that the X-Nauts want to use for world domination.

Not only is the story deeply intriguing due to how different it is than your typical Mario game, but the world itself and the characters Mario meets on his adventure are well written as well. His companions all go through significant character development throughout the story, and their relationship with Mario clearly grows as you progress. Even outside of your party, the random NPCs that appear are interesting. Talking to them reveals a lot about the world, can reveal secrets the game is hiding, or are just plain funny.

Humor is one of the game’s best weapons. It is so intelligently written from the dialogue to flavor text. The game has a charm that cannot be easily replicated. Because it isn’t just a humorous story. It can get quiet dark too. From crime bosses who commit murder by draining their subordinates of their life energy so that he can remain young, to an entire town engulfed my depression and misery. This game isn’t afraid to get dark, discuss death, and the repercussions losing someone can have on a person (or Bob-omb).

Due to this ability to juggle tones in a masterful fashion, the game excels. Being able to distance itself from the main-line games in more ways than just gameplay is huge. Because of Paper Mario’s childish artwork, many might get the wrong idea. Yes, many of the more recent titles in the series have cheapened the series some. But The Thousand Year Door isn’t just for children. It’s an expertly written narrative that manages to contain humor for all ages, with darker tones that only adults will understand.

Stacks on Stacks of Action

For a turn based RPG, Paper Mario: The Thousand Year Door remains unique as well. It draws the basis of its combat system from its predecessor but otherwise there are few games like it. Instead of having your typical four party members face off against however many enemies with you all in line facing each other, Paper Mario uses a two party system.

You have Mario and one party member. The second character you have stands behind Mario, meaning not all attacks can reach the person in the back. Plus you can rotate their positions, so if Mario takes too much damage you can throw Koops out there to protect him. And only your team is limited to two members. You can fight a half dozen or more enemies at once, who are structured in a similar fashion.

Instead of using elemental types the game instead utilizes differences in move reach, enemy armor, and more to determine how effective something is. Mario’s hanmer attacks can’t hit enemies who are in the air, and his jump attacks can’t hurt people with spikes.

There are also items and Star Moves that add extra depth. Star Moves are acquired from every Crystal Star you find. They can damage enemies, restore health and flower points, or immobilize enemies. They can quickly turn the tide of battle. But they’re costly. Since the battle stages of Paper Mario are structured like theater stages, you get Star Points by appealing to the crowd watching, or doing impressive feats during combat.

So whether you’re bopping some Goombas on their head or giving some Koopas a headache, the game will not only remain fun, but rewarding too.

There’s more gameplay outside of just combat. One thing that’s done really well is playing up the paper aspect of the game. Throughout the course of the game Mario will be “cursed” on a few occasions. These curses grant him new abilities. Such as being able to go flat so he can slip through cracks in the wall, to turing into a paper plane or boat to reach new areas. In some aspects these abilities almost turn the game into a Metroidvania-like.

I say this because there are many areas of the underground below Rogueport or even previous dungeons you’ve been to that have areas that are inaccessible until you progress further into the story and gain new abilities. It isn’t used much for narrative progression though, so it’s not quite fitting to the genre.

There’s also the leveling up system for you and your teammates, the Trouble Center full of side missions, and all kinds of nooks and crannies for you to discover throughout the journey.

The Art of Paper

Obviously Paper Mario has a unique artstyle. Everything in the world is designed to look like it’s made out of paper. Not only does this style work both aesthetically and narratively, but it looks beautiful as well. Despite the games age the graphics have held up. Most players would be hard pressed to guess the system this game came out on if they had no prior knowledge of the title.

That’s a really impressive feat. Many games have aged horribly due to art styles and graphics that have become far outdated. But Nintendo once again proves that realism with artistic choices is not always the best root. Especially for creating games to live through the ages.

Not only is the artwork well done, but the score is great as well. The music manages to vary in styles depending on the area of the world that you’re in. The Glitz Pit has blood pumping tunes where as Twilight Town is full of sorrow. Every track manages to elevate the quality of the world, the gameplay, and even the characters themselves.

Paper Mario: The Thousand Year Door is nearly flawless. It suffers from some minor pacing issues, otherwise it is backed up by a phenomenal story, well crafted characters in a rich world, with a deep and rewarding combat system. It truly is a shame that we may never again see a Paper Mario game done in this fashion. A true masterpiece.

Want some more reviews to read? Of course you do! Just head on over to Open Critic for some more!

Paper Mario: The Thousand Year Door is what a Mario RPG should be. It’s well written both in terms of story and characters, and is paired with a combat system that is fun, fast paced, and rewarding. The world of Paper Mario is far thicker than just a piece of paper.