One Step From Eden On Nintendo Switch Review 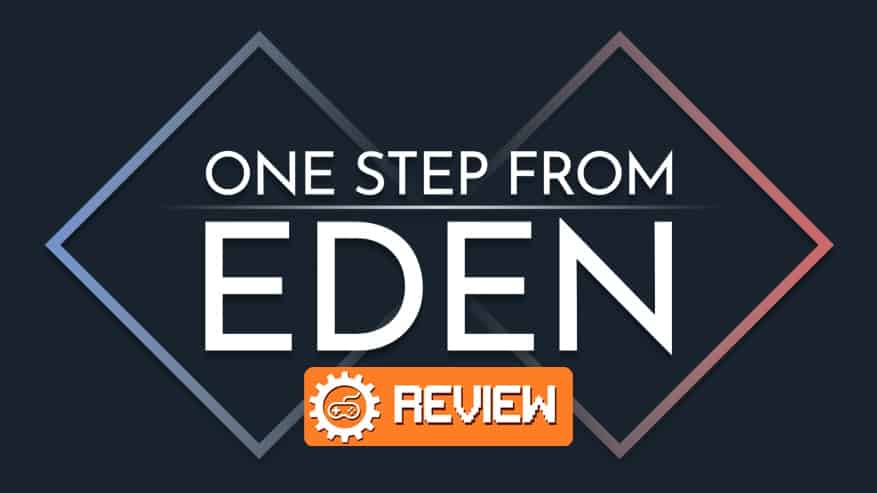 Some of the best things about indie game dev are experimentation and building on past ideas. These are often risks that the AAA industry cannot afford to take when creating games that lean towards re-invigorating or re-imagining older game concepts. Hollow Knight and Dead Cells are Metroidvania games that are more creative than anything the creators of Metroid and Castlevania have offered in recent years. One Step from Eden invokes the frantic gameplay style of Capcom‘s Mega Man Battle Network to create an infinitely replayable experience I never knew I wanted.

The sole creator of this game mentioned that”I felt a Mega Man Battle Network-sized void that no other game could fill, so I decided to make one”. And boy did he deliver. Here’s our review of One Step From Eden on Nintendo Switch, brought to you by Humble Bundle, and created by Thomas Moon Kang.

One Step From Eden is a roguelike game in the same sense as Rogue Legacy, The Binding of Isaac, and Dead Cells. It’s a love letter to the Battle Network series Capcom created during the early 2000s. While it sports a familiar gameplay style, it improves upon the formula by offering a fun, new experience every time you pick the game up.

One Step From Eden features real-time combat with Slay the Spire‘s deckbuilding mechanics, where you use your deck of cards to perform attacks to defeat various enemies on a 4 x 8 grid. You improve your deck with rewards like new cards or artifact power-ups, which are necessary to beat the boss for that area. It’s a fast-paced game that requires not only strategy, but mobility, timing, positioning, and a little bit of luck. Enemies and bosses ramp up their power, movesets, and damage as you progress, which leads to better rewards, better cards, and new paths.

Every run is different and can lead to new potential setups, and the amount of replayability and unlockable content is staggering. One Step From Eden is the ultimate realization of what I loved about this style of game. It features beautiful pixel artwork mixed with amazing tile-based gameplay and a variety of attacks, abilities, and characters to choose from.

Heart of the Cards

One Step From Eden‘s biggest draw (pun unintended) for me is the amount of gameplay variety it offers. Each character starts with a core deck and unique abilities, but you can develop them in different ways.

The game classifies its cards based on the abilities and attacks they align with. Cards in the Anima set concentrate on elemental damage, while the Miseri set deals with poisons or revenge mechanics. You also collect artifacts that are permanent buffs from one battle to the next, and each area you complete rewards enough artifacts to complement your current run’s deck.

It’s a captivating system that adds tons of replayability and randomness that give One Step From Eden a solid gameplay experience that, while frustrating at times, allows for tons of creativity. Sure, you can focus your deck on your favorite card types, but sometimes the cards and artifacts presented to you force you to adapt. Making the best choices for your deck deck rather than going with what you’re comfortable with can lead to some fun gameplay styles that wouldn’t be possible without the game’s roguelike elements.

One of my other favorite things about One Step From Eden is a sense of progression between runs. I understand the random nature of roguelikes, but every roguelike should include at least one attribute that progresses between runs. Even through multiple failed runs, you’ll still be building up your arsenal while learning the game’s mechanics and strategies.

One of the best parts about the game is the amount of care given to its development. There are a ton of cards and artifacts — easily over 200+ — each with unique artwork and flavor texts. Cards and artifacts often make references to gaming and nerd culture. For instance, the “Swords of Light” card is an homage to Yu-Gi-Oh! and Infinity Beam’s flavor text “I’ma firin mah LAZOR” is a nod to the Shoop Da Whoop meme.

The bosses you face have unique and varied attacks that ramp up fast in later levels. The first couple of runs, you feel that you have a bosses’ attack patterns down, but facing an Area 2 Selicy or Gunner is nothing compared to facing them in Area 4+. You can never get too comfortable, as not only do their attacks do more damage, but they start to change their attack patterns, even adding brand new moves in the later levels. Each character wields a different weapon that alters how you approach each run to maximize their strengths to the fullest.

All the characters have beautiful artwork, unlockable costumes, alternate gameplay styles, and are well-animated. I hope the game keeps building upon its character variety as future DLC or for the sequel.

One Step From Eden is one of my favorite games I’ve played, and it fills a niche that’s been left empty for too long. The game does so much right that it’s hard to point out faults that couldn’t be improved upon in future updates or DLC. However, one gripe I have is that it isn’t clear how to unlock everything in the game. A small roadmap of where to find certain outfits or characters would’ve been nice.

Nintendo Switch is already an indie darling like its predecessor (RIP PS Vita) and One Step From Eden is perfect for on-the-go sessions. Considering that Mega Man Battle Network started on GameBoy Advance, it’s nice to see it debut on Nintendo’s latest handheld platform. However, I have noticed that there can be some slow down if enough crazy stuff is happening on screen. It happens rarely out of the hundreds of runs I’ve played, but it’s worth mentioning considering that speed and precision are key to landing your attacks.

Local co-op and PvP are welcomed additions, but playing with standard split Joy-Cons is not optimal. The Joy-Con’s left or right thumbstick aren’t accurate when compared to the D-pad. Multiplayer works well even with that minor gripe and can lead to some great moments when playing with a friend.

Let’s Shuffle It Up!

One Step From Eden is addicting, intense, and an all-around great card-based roguelike with tons of replay value. It’s a love letter to the Battle Network series, but it adds a fun feistiness to the formula you never knew you wanted. The characters are lovable and help build on the game’s difficulty while adding ways to play with their unique skills and weapons once they’re unlocked. The game even offers local co-op and multiplayer to share in the fun!

Thanks for reading! Don’t forget to check out some of my other reviews like MegaMan Zero/ZX Legacy Collection and LEGO Jurrasic World. For more great interviews, reviews, editorials, and news stay tuned to CultureOfGaming.com or check us out on OpenCritic.com.

One Step From Eden is addicting, intense, and all-around a great card-based roguelike with tons of replayable mechanics. The game is a successor to the Battle Network series but takes the initial framework and adds a fun, feistiness to the formula you never knew you wanted. This indie is perfect for long hours of play or in small bursts when playing on the go. If you love games like Dead Cells, Hollow Knight, and other beloved roguelike games, do yourself a favor and play One Step From Eden and add see for yourself its amazing gameplay and strategy systems.