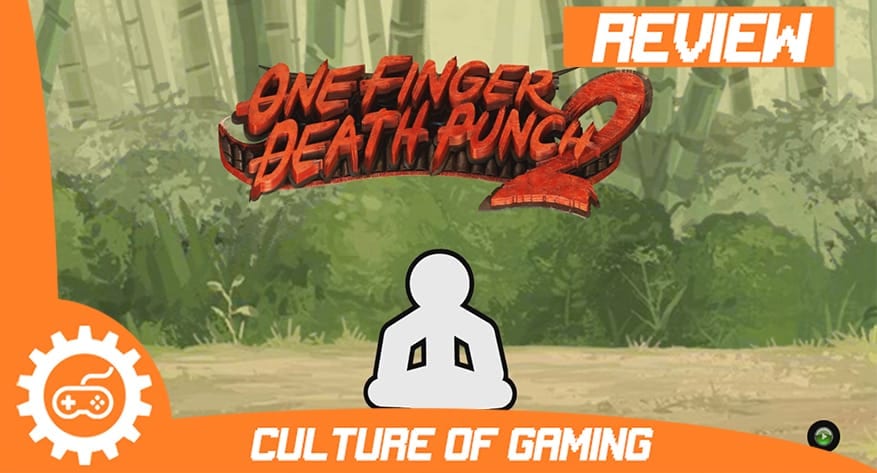 It’s important to know that this game is probably one of the most action-packed brawler games out there. It has crazy kung fu moves that you use to fight off hundreds of enemies. There are guns to keep baddies at bay. Thirdly, you get super powers to defeat the most powerful of enemies. The catch of course is the simplicity of the gameplay which only uses two buttons to attack enemies on the left and right of the character. That’s right, One Finger Death Punch 2 requires only two fingers to play. It’s both insane, and easy to understand.

You play as a stick figure whose goal is to become the One Finger Death Punch Master. The only way to do that is to venture through over 400 levels filled with intense music, unique stages and hundreds of enemies using the crazy kung fu that fans of the original are used to. Using the two buttons, the left and right click, you beat enemies in generally one hit. If the player continues to play fast the game’s overall speed will increase, making the player become both faster and more skilled as a fight goes on. This can be both tough and rewarding through several levels of the game.  While every single fight presents a unique challenge to the player despite how fast-paced and superb the animations are, the levels seem to be overall easy at least at the beginning.

The presentation in the fights is flashy as well. The fights take place in several different backdrops such as a beach, a prison, or a village. As the character moves around fighting, background buildings and props will be dropped in for the player to contextually use to execute special moves. Unfortunately, the backdrops start to feel the same due to the amount of levels per region. Assets also get reused throughout the next few levels. While new map areas introduce new level settings, the stages feel the same after a while especially since the music doesn’t change up that often. Don’t get me wrong it’s a good soundtrack but playing this game for at least an hour can reveal most of the game’s OST in a single sitting.

A World of Kung Fu!

In between fighting mobs of enemies, more unique levels are scattered throughout the world. Some levels will grant the player a power weapon that will be used throughout the fight, while others will require the player to gain kills through only the use of the Ball of Death. They’re all fun and requires some skill to complete but if players want a new challenge, they can take on the levels that grant revenge tokens. These give the player health after death, a skill point, or a trophy from each region. These stages seem to have some of the difficult fights as the general levels, but they’re never too hard to warrant using a token.

The levels that will tempt you to use Revenge Tokens the most are the boss levels. These appear as evil four-skulled doors. While the levels are fun, the boss sections can quickly become a challenge as they force players to play in different ways by introducing new enemies with different fight patterns, or just confuse the players by setting up strategically-placed enemies on either side. In the end you’ll generally beat the level you were having a hard time with after quite a few tries and feel like the kung fu master. It’s such a shame that these levels are too far in between.

Power Up to Fight Harder!

If fighting mobs of enemies with your bare two fingers isn’t enough, the levels and power-ups they provide will keep you wanting more. Periodically when playing, power-ups may randomly activate in the form of one-hitting two-hit enemies, shooting lasers, break dancing, and riding a horse! These power-ups are a welcome addition to the game and add a lot of variation between levels. In fact, the art for doing many of your moves matches so well with the game it’s unbelievable. You see so many different characters depending on what your stickman is doing. It seems that there’s a different piece of art depending on the move or what weapon you’re holding.

There are several art designs to see depending on your attack.

There are 21 skills overall and they’re all devastating. While they’re all easy to unlock, they’re even interchangeable if a skill doesn’t fit a certain playstyle. The problem is that the skills are unlocked slowly between levels. It’s one point per one skill-point stage. It feels underwhelming gaining just one point at the beginning of the game.

If the 400 plus levels weren’t enough, then the game has four different survival towers. Here players can fight endless waves of enemies to compete on the leaderboards. The main survival tower is a standard survival mode. The player fights waves of enemies over a long period of time. As the game seems perfect for such a mode, it’s slow pace near the beginning is almost unbearable. The same goes with both the Cooperative and No Luca No modes. Cooperative can be played with a friend while No Luca No mode involves the player pushing an annoying cat covering the screen while fighting waves of enemies, it’s both fun and amusing.

While co-op and pushing cats is fun, they offer only slight changes to the standard survival mode. The Gauntlet Mode actually stands out since it adds a new variation between survival and story. Instead of waiting for the enemies to approach you to advance through the tower, players fight through a set of levels you get to choose from. While you can choose to do all of them, your health that carries over throughout the gauntlet, so try not to get hit during this mode.

Can you survive the gauntlet with full health?

One Finger Death Punch 2 is a huge improvement over the original through gameplay, animation, and creativity. This will be a game that players will go back to from time to time. They’ll get a huge rush from fighting hundreds of enemies with only their two fingers. It’s a slow grind to get to the crazier levels. Yet, One Finger Death Punch 2 will surely please those who wish to witness some of the most hype gameplay ever seen.

One Finger Death Punch 2 releases on April 2019 on Steam. The game was developed and published by Silver Dollar Games. For more Culture of Gaming reviews tune into OpenCritic.com.