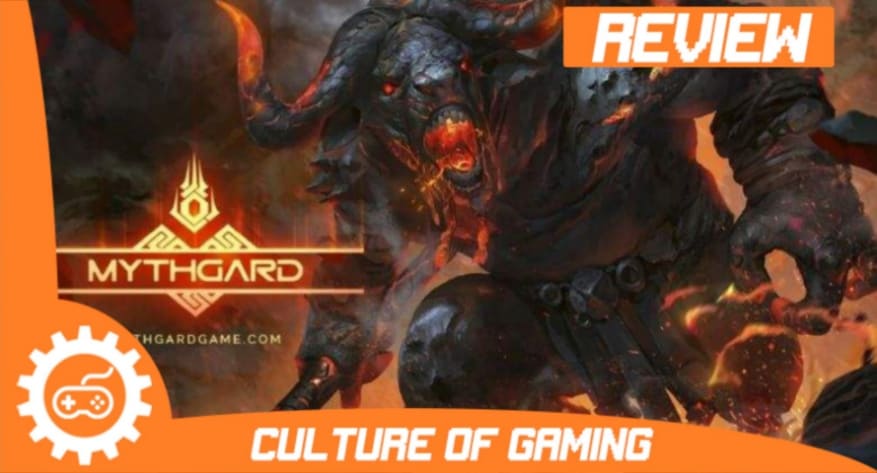 Mythgard is a free to play, online card collecting game (CCG) for PC and mobile platforms. The game is currently in early access, but has received consistent patch support. The developers over at Rhino Games Inc. have also been very transparent in terms of changes being made and future features that will be implemented, although a set release window has yet to be shared.

The world of Mythgard is a concept we’ve seen before. The gods of many different mythologies all coexist, along with humans. However, the way they present this topic is unique itself. The most powerful of gods have long killed each other off, placing lesser entities into conflict with humans and the rise of technology. The gods of the world are steadily becoming less special, as human knowledge and inventions expand.

Much of the games setting takes place in a seemingly lawless land, with post apocalyptic-esque aesthetics. Though it isn’t clearly stated if a world ending event ever occurred. The story puts you in the shoes of many different characters, from gods, to humans, to beasts.

Currently, only chapter one is available to play. So, there isn’t much to go off of. From what we have seen, the story is certainly interesting, and well written for the most part. Some dialogue feels awkward at times, but otherwise, they manage to intertwine these many narratives in a way that isn’t jarring for the player.

Plus, since they mix up whose story you’re following, it means you are consistently using different decks, and facing different enemies. This keeps the game play interesting, and means the story is simultaneously teaching you how to play all deck styles. Which is great.

Most CCG games utilize lane based combat. These lanes are where your minions are placed, they decide what enemies you can attack, and also limit different types of enchantments. However, the game also implements tridents. Meaning, your minions can only attack the space directly in front them, and its two adjacent spaces. This forms a trident of attack. In order to attack your opponent directly, you have to remove all enemies from your trident.

There are many reasons for this, and ways to do it. The trident based combat allows for blocking and dodging mechanics that manage to streamline the game, without over complicating it. You can also use move your characters using their action, to try and get around your enemies, if you cannot defeat them. This helps eliminate phases but keeps fast paced, strategic combat.

There’s a lot this game does great. Allowing you the freedom to make your decks, by combining any types of cards you want. A two resource system that is a lot more smooth than games like Magic the Gathering. It eliminates the need to “tap” resources to use them, as each resource can only be used a certain way. I love CCG games, but games like MTG are very tedious, and sucks out the fun for me. Mythgard manages to implement a system much like MTG, while making it simpler to use, without negatively effecting the difficulty or strategy of the game.

The game has a ton of modes. The modes have a surprising amount of replay value as well. Mythgard has a story mode, a PvE Brawl, casual PvP, Ranked PvP, 2v2, Puzzles, PvE Draft Gauntlet, PvP Draft Arena, and more ar expected to come with the full release. That’s a lot of game for a free to play game.

There are micro-transactions, so one could argue that the game is pay to win. The more you spend in game, the more cards you get, the better decks you can build. But, getting new cards is extremely easy. And there’s earnable in game currency as well. I don’t believe it will be a big issue. This is a CCG, and the genre was founded in the idea of buying packs of cards. So, it’s an acceptable way for the developers to support the game.

Basically, no matter how you want to play, you can. The modes are hard, but addictive. They’ll allow you to build decks and test them out as you please, as well as helping teach you the deeper complexities of the game. After playing all the modes, I can easily say they’re all very high quality. My favorites are Puzzle, and 2v2. The puzzles tackle specific situations that you have to figure out how to get past, and 2v2 adds an extra layer to combat by forcing cooperation to succeed.

The multiplayer in general is very satisfying. The game has very advanced AI, but nothing beats versing another real person. Ranked is a great addition for the more competitive, and the draft mode is a great way to even the playing field, and gauge how good your overall strategic skill is, instead of a reliance on a superior deck that you know every trick too.

The music is magical. Which is obviously the point for a world made up of gods, vampires, and talking dogs. It manages to add some extra intensity to the game. Using music to accurately describe your game, and enhance the quality of it, is hard to do. For most games, the music is just there. It’s a back drop that does little in of itself. But Mythgard manages to do more.

I was impressed with the obvious effort and care put into the music. For a CCG, this is pretty rare. Regardless, kudos to the composers of the score. I felt like I was on the battlefield of a mythical video game battle for real.

Artwork of the Gods

Most of the art in the game is breathtaking. From the main screen background, to all of the art included on cards. A level of artistic mastery rarely seen is ever present. The monsters all invoke levels of tension, or various emotions fitting to their various factions. Even something as simple as the virtual table you play on is aesthetically pleasing.

Unfortunately, there is some not so good artwork. In the story mode, the cut scenes use the slide show mechanic. They’re still pictures that change after so many lines of dialogue to show something else. A lot of them look fine. But there a few that are off. Mostly, they fail to advance or display what’s happening properly. From awkward angles, to just fluff material.

Overall, the artwork is really well done though. And the ability to customize is great too. You can adjust your portraits and card backs to various styles that are more fitting to your own tastes.

Mythgard is amazing. Few CCGs manage to provide such a level of simplicity while maintaining such a high level of strategy and challenge. Even though it’s in early access, the game has a ton of content. Many different modes, all of which have a great level of replay value. While there are improvements that can be made, Mythgard is in a very good place. It’s difficult to believe that this isn’t a full release. Many AAA publishers probably would have rushed this out already.

Want to read some more reviews? Then head on over to Open Critic for all your needs!

Mythgard is set to be a CCG masterpiece. Which isn’t shocking when you take a glance at the veteran team behind its wheel.