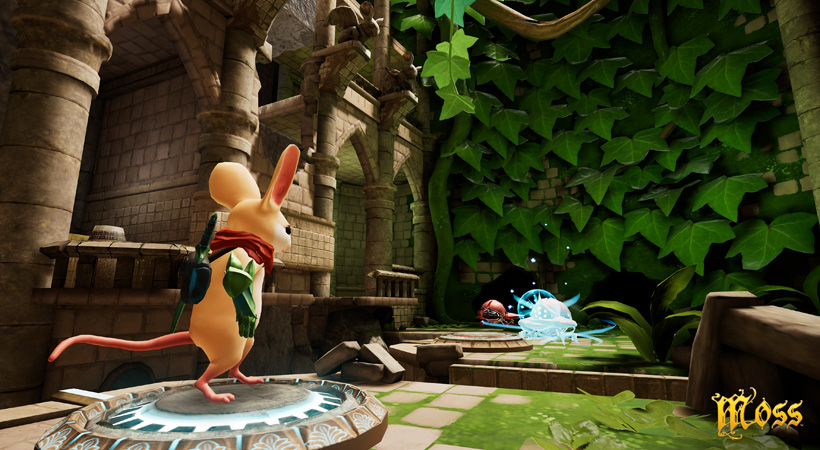 I have played a lot of PlayStation VR titles and none of them are like Moss. Moss is a puzzle/adventure game that focuses on you, the reader, and Quill, your tiny adorable mouse partner.

The game plays like a storybook. What I mean by that is that upon starting the game you are sat in front of the book of Moss. You open the cover and immediately are told a story about the past. Flipping a couple of pages in, you yourself are thrown into the book as a mystical “reader” who helps Quill across this tiny war-torn world.

Moss is unlike any game I have ever played in Virtual Reality and quite honestly it is EXACTLY what VR is meant to be. The controls are extremely easy to understand and use. L2 and R2 are the “reader’s” buttons while the left stick, O, and X are for Quill. That’s it! Everything else is played using the VR headset as you look around this world and explore it alongside your tiny companion. Unlike other VR titles, this game does not make you motion sick! This game plays from left to right (like a book) and the only time you have to move around with your headset is if you want to look around or behind an object in the game. You can even stand up and look around the stages and see all aspects of the level. This way you can truly see the level design and any hidden secrets that the game might hold.

The only complaint I had with this game is that it was not long enough. The story can be completed beginning to end in about 5-10 hours. That being said, there is more content to come. The story ends and then you pop a trophy that states “Completed Story 1”. What that tells me is that there will be more books and more stories from the book of Moss.

Polyarc Games has made a world that honestly makes you feel like you are apart of it. You are instantly put into a world of danger while you unravel some of the mysteries of the past. Anyone can play this game. Whether you are a skilled video game veteran or someone completely new to gaming, this game is for you. This is the game I will show people in the future what VR is like. And for all of those Trophy Hunters, yes, there is a platinum trophy! The world is absolutely beautiful, vibrant with colors, and amazing to be a part of.

The story of this game is sheer brilliance. Quill recovers an artifact that joins the “reader” to Quill. You, the reader, are there to help guide Quill to fulfill her destiny and help solve the puzzles in her way.  The puzzles are not to,o difficult but some can be frustrating if you are trying to 100% this game. If you don’t have your controller just right some of the puzzles will not react the way you would like them to. As you progress through the story, you are occasionally pulled out of the book to hear the narration and flip through some of the story. This part of the game reiterates that this is a story of the world of Moss.

This game is easily my favorite Virtual Reality game of the year. The way you get invested into this beautiful world just captivates you. It makes you want to never take the headset off or put the controller down. You can tell with every sound, animation, or visual how much this team loves this story and how much they want you to love it as well. Polyarc Games absolutely made a game that is a lot of fun to play.

Moss is what the PlayStation VR was made for. The captivating story instantly pulls you into the world of Moss as you help your tiny little companion Quill on a perilous journey to help save a loved one. The story is well written and makes you want more and more every time you play the game.