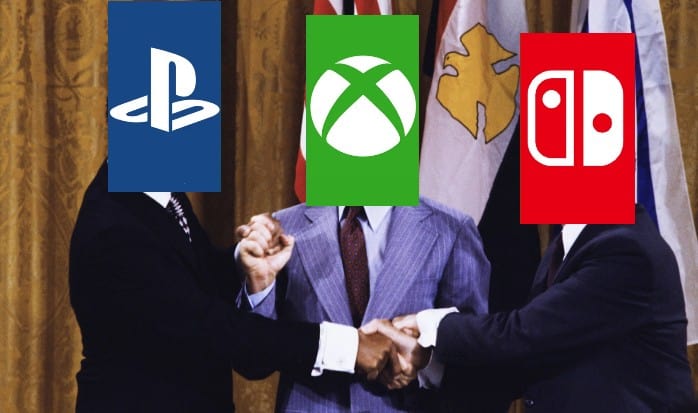 Growing up, you come to realize there are two things you do not talk about with strangers: Religion and Politics. If you are a gamer, however, you can chalk that up to three things with the discussion of “Console Wars.” If you ever wish to tangle yourself up in pure nonsense, just go onto Twitter and openly declare things like “Series X will teraflop the PlayStation 5!” or “PlayStation 5 will run so much better than the Series X!” and watch the fallout unfold. At some point, you find yourself having to step back and think to yourself, “Why should anyone care what console you play on?” Each platform has its own selling point and with the recent move by Microsoft, we can safely declare that the console wars are officially over. Because just like Nintendo, Microsoft’s gameplan goes well past just trying to sell their upcoming Xbox Series X.

Working towards your strengths

So if we line up the three systems right now, you can probably say where the strengths lie within each of them. For the Nintendo Switch, we not only have your favorite Nintendo titles but the ability to enjoy your games either on the go or on the television. Meanwhile, for Sony’s Playstation consoles, it is all about those special exclusive games. To go alongside with those exclusives, the upcoming PlayStation 5 will be making a pretty big push in terms of new innovations such as 3D audio and their brand new DualSense controller.

So then what exactly do Microsoft’s Xbox consoles have that the other two don’t have? One could use this time to take a quick jab and say “no unique games,” but let’s really consider this as many would be quick to undermine the behemoth Microsoft and some of the features it has in waiting which could very well become the future of gaming: Accessibility Options. We could mention the Xbox Adaptive Controller but this article is more to the idea of how accessible it can be to play games on the Xbox One and the upcoming Xbox Series X.

With the recent actions Microsoft is taking towards the next generation, it is clear that the overall plan isn’t really to get everyone onto the Xbox Series X right when it launches. It would be the ideal plan later down the line, but for now, Microsoft wants to make sure no one is left behind as any game that comes to the Series X will still be playable on the Xbox One. Their Masterplan? It all just so happens to revolve around the one big feature that the other two platforms don’t have: A proper Streaming Service and a proper Cloud Service.

If there’s one thing we as gamers know all too well, it is the fact that we only have so much money to spend on games. It would be great if we had big disposable incomes, but we have to work within the parameters as best we can. However, much like how Netflix did show everyone how great it is to watch shows and movies from anywhere, Microsoft took that same approach with the Xbox Game Pass to let players tap into a giant library of titles to play on both Xbox One and PC. You might think it sounds like profits would get lost for both Microsoft and anyone participating but there are actually success stories mentioning how Xbox Game Pass gives something that some developers wish they could have: Exposure. One example we can use is Mike Rose (No More Robots) in the following tweet:

If I take the month before we went into Game Pass, and compared it to sales of the game last week, we're now selling around 5 times as many units each week as pre-Game Pass, on a weekly basis

Since we went into Game Pass, our total Xbox sales have TRIPLED

Game Pass is good, yo

A service that is beneficial to both Developers and Consumers? No wonder there are over 10 million subscribers there. Between being able to sample the games in full and being able to buy those said games at a discount, it is something that does feel too good to be true.

But there is one other thing that Microsoft’s is doing and it relates to upcoming xCloud service. Xcloud is actually going to join the fold at no additional cost to the Xbox Game Pass Ultimate package. There may be plans in the future to have the service be its own things later on, but for now, the service that will let you, “play over 100 Xbox Game Pass titles on your phone or tablet,” and will arrive in September.

In a sense, many aren’t hesitating to point out how plans for Project xCloud puts Google Stadia to shame.

How well will this work out?

Much like how some do not consider Nintendo when talking about the “Console Wars” for doing their own thing, the same can now be said of Microsoft’s approach to gaming from here going forward. It sounds insane, but that’s where we find ourselves at.

Of course, this can also be a pretty big gamble for Microsoft too as this does hinge on having a consistent player base that will stay with them as we move into the next generation of gaming. From various news sources, we know that Microsoft will be discontinuing the Xbox One X and the Xbox One S (Digital Edition) to pave the way for the next console. Considering Microsoft’s “no one gets left behind” approach, it would make sense to remove these two consoles out of the market as those who wanted the One X would have gotten one by now, while those thinking about it will probably be better off holding off for the Series X. There is also Microsoft canceling the “12-Month” plan (which does seem to be another comparison one can make with Netflix as their plans are monthly as well).

In the end, the game plan of Microsoft is literally to become the “Netflix of Gaming.” Will we see this happen? Time will tell for sure, but there’s no denying that with this approach, there are definitely going to be three vastly different gaming experiences coming up for the Ninth Generation of Gaming.

What do you think?

Is Microsoft’s upcoming plans going to work out for them? Is it a good idea to ensure Xbox Owners don’t have to upgrade right away? And what are you expecting to see from the upcoming event? Leave your thoughts down below and be sure to follow us here at Culture of Gaming for more articles covering the upcoming consoles and other things in the gaming world.