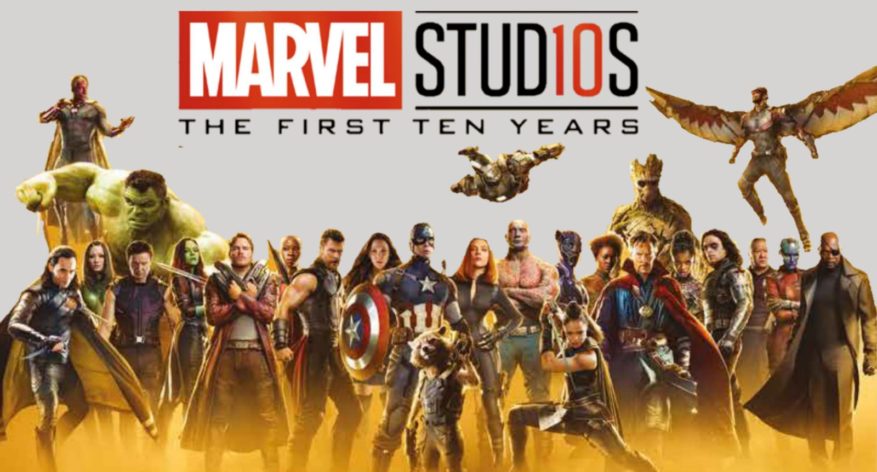 Titan Publishing and Marvel Entertainment are celebrating the 10-year anniversary of the Marvel Cinematic Universe with the fantastic behind-the-scenes collector’s edition hardback; Marvel Studios: The First 10 Years – and yes, it has been 10 years!

Marvel Studios The First 10 Years covers all the MCU movies in the past decade, breaking them down phase by phase. Starting from the very beginning with Iron Man and all the way up to this year’s Ant-Man and the Wasp.

The collection features an exclusive look at each of the films in Marvel’s movie empire. With photos, breakdowns, easter eggs and a series of interviews with cast members and directors. Think of this as a director’s and actor’s commentary, all wrapped up in a glossy, high res hardback.

10 Years In The Making

All the way back in 2008, Tony Stark introduced himself to the world as Iron Man. Shortly after, Nick Fury told Stark that he was now “part of a bigger universe…” and the rest as they say, is MCU history.

In the years since we have seen our favorite superheroes overcome all kinds of evil. Each heralding from while adding lore to amazing places like Asgard and Wakanda. The Avengers have assembled, the guardians are guarding the galaxy, and old compatriots have even fought each other in a civil war.

All while, the hunt for the six Infinity Stones has quietly continued and slowly been unearthed. And now, all the worlds and their heroes have finally come together in Avengers: Infinity War. Culminating in 10 years’ worth of ground-breaking storytelling.

The brains behind the planning of the MCU operation, Kevin Feige, talks about the success of the MCU. Fiege puts the success down to the audience enjoying the cross-pollination of the different characters and unequivocally getting behind Marvel Studios. This gave them the confidence to do more films and blueprint everything leading upto Avengers: Infinity War.

In an excerpt from the book, the legendary Stan Lee touches on seeing Iron Man brought to life,

“The first movie was phenomenal. It was one of the most satisfying experiences of my life. When I was on the set and I saw the enthusiasm on the part of the cast, and Robert Downey Jr and Jon Favreau and everybody, I had a really good feeling about the movie.”

Through these interviews it showcases that the talent behind the movies are another reason for the movies being such a commercial success. It is also reassuring to learn that they thoroughly enjoy working on and playing their roles in the movies.

Marvel Studios: The First Ten Years looks in-depth at the rich history of Marvel Studios. Featuring stunning photography and information on each film, including a guide to movie easter eggs and end-credits scenes.

The easter eggs give more feedback on the creative and design choices taken, as well as links to the comics. With full-page stills giving a closer look at character models, make up and costumes for the movies in question.

Some intriguing facts from the book covers my favorite MCU movies – which are also coincidentally directed by the Russo Brothers.

All this allows for a deeper appreciation of the movies, especially from an artistic point of view, as it gives reasoning behind some of the choices taken.

THE BAD
Want more info on each film.

A collector and MCU movie buffs dream – making it the perfect gift for Christmas.