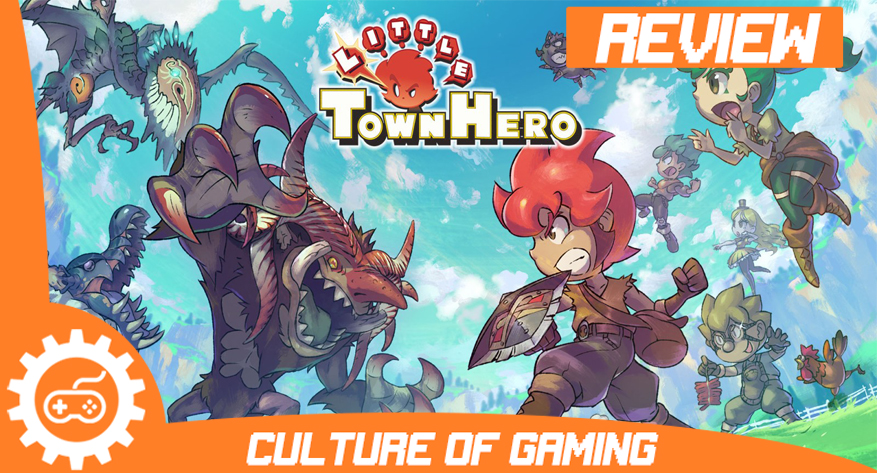 I was so happy when I was provided with a copy of Game Freak’s new game, Little Town Hero. For those who don’t know, Game Freak are the developers of the Pokemon series. While they were working on Pokemon Sword & Shield, they were working on a new IP, Little Town Hero. Little Town Hero is a card-based JRPG with a mix of Hearthstone and Fire Emblem gameplay. However, this game has been receiving mixed reception online. Some claim it to be a risky but fresh game. Others say that it’s a complicated mess. What do I think about this? Let’s find out!

The game, from what I’ve played, has a relatively simple premise. You play as the energetic protagonist, Axe (whose name can be changed). Axe has a dream to become a soldier for the king to explore the dangerous land beyond his small town. One day, he attempted to sneak into the city with his best friend, Nelz. But they failed due to his rivals, Matock, interference. However, one of the best solider, Angard, notices their determination and eventually decides to train them to be soldiers. In addition, in exchange for the training, Axe and Matock must fight monsters for him while he gets the credit.

I won’t go into the story anymore since I don’t want to spoil anything for anyone. I personally like the overall story, at least from I’ve experienced. It’s nothing special but it suffices enough for me to keep going thanks to its great dialogue. Unfortunately, the dialogue is dragged down a bit by its characters. They are either bland or generic with stereotypical tropes like the old and tired solider, the nerdy friend, the angry mum, etc. It’s tough to care about protecting the town when I don’t really care about the citizens in the town.

The biggest gripe I have with the game is the gameplay itself. It’s kind of hard to explain but I’ll do the best I can. Like I said before, Little Town Hero sort of feel like a mix between Hearthstone & Fire Emblem. There are three “Dazzit” types which act as card types. There is Red Dazzit, used for offensive tactics. Next is the Blue Dazzit, which is like the spell/magic card for situational scenarios. Lastly is the Yellow Dazzit, which acts as the defensive option. Before you can use them you need enough “Power” to charge the “Izzit” into a Dazzit. You use these to slowly take down the opponents health with carefully picking and planning with what you got. Each Dazzit has an offensive and defensive point and pretty much you need your numbers to be bigger than the opponents Dazzits.

There is also backup support from the side characters that can give you benefits such as extra damage. To get those support you must move to them after a turn with a Mario Party type board system and 4 number dice. To actually defeat the opponent, you must enter all break by breaking all their Dazzits and hitting them in Chance mode. Plus the UI is so distracting compared to other JRPG like Pokemon and Final Fantasy.

Now that might sound overly complicated and messy and the truth is that it is. The battle system has so many mechanics that it’s hard to keep track sometimes and with the unnecessary name for the mechanics such as “Dazzits”. It doesn’t help that some battles can last for so long. I had one occasion where a battle lasted for 15 minutes. The combat really needed an overhaul or some tweaks to make it more enjoyable then it is.

Our Lord And Savior, Toby Fox

Moving from the biggest flaw, we go the best part of the whole game, the visuals and the audio. The visual has a fantastic art style popping with colour and life in the air. The character design is great, especially the monster designs, which is no surprise coming from the Pokemon team. But it wouldn’t be a Nintendo Switch game without poor frame rate issue. Sometimes when I’m exploring the overworld, the frames drop tremendously and it can irritating sometimes.

But nothing comes close to the amazing soundtrack in the game. The soundtrack is primarily made by Toby Fox who also does the music for the indie juggernaut, Undertale. I kind of wish that Game Freak sells the soundtrack separately online if they haven’t already. The music has a lot of variety and is always enjoyable to listen to. This deeply helps the long and tedious battle segments so much that if it wasn’t for the music, I don’t know if I could continue playing the game without something playing the background.

In the end, I solely admire that Game Freak managed to create what was clearly a passion project. However, there are quite a few flaws with the game. Primarily the gameplay being overly big and messy while also being quite tedious. Plus the bland character doesn’t really help as well. However, there is some aspect that helps it a lot like the magnificent soundtrack, enjoyable dialogue and great visuals. If this game gets a sequel and fixes these issues and tweaks a few other aspects of the game. Little Town Hero could be something special in the JRPG community.

You can buy the game for $69.99 on the Nintendo eShop or at your local retail store right now.