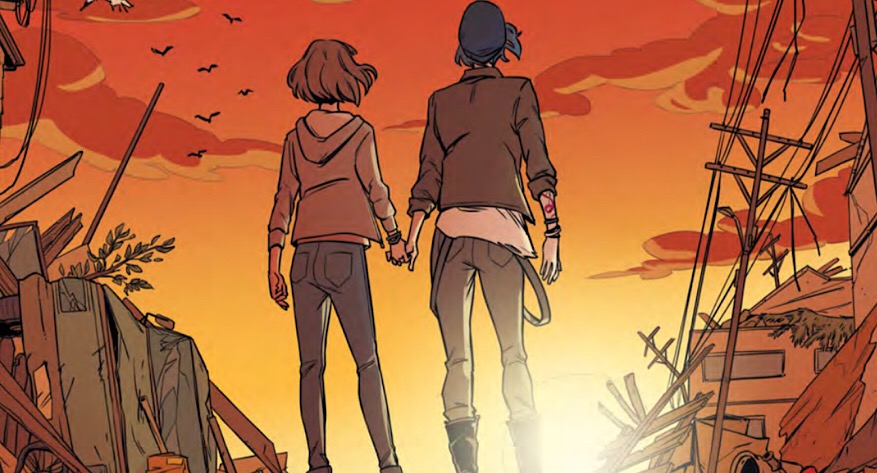 Life is Strange revolutionized episodic story-driven video games. It has a beautiful soundtrack and a highly interactive story where every decision matters. It has the ability to tug at your heatstrings. No wonder Titan Comics decided to start a comic book series on the game. They already had experience converting a game universe to print. Their Dark Souls and Bloodborne series captivated fans of both universes marvelously.

What a Difference a Year Can Make

This comic book is set a year after the fate of Arcadia Bay. The plot follows down the path of Max’s decision to save Chloe instead of the town, where Max and Chloe are now living in Seattle with Chloe’s mother, trying to re-establish their lives and leaving their past in the wreckage of their childhood town.

The comic starts off with Max in her thoughts giving us the definition of the butterfly effect. She reminisces on her previous actions before placing herself in the equation as the butterfly, coming to the realization, that she was not the offender as the butterfly would be placed out to be yet a victim being caught in the crosswinds of fate.

Setting the scene straight away, we are introduced to a group of girls that are part of an indie band, that Max has been taking photographs for. While they’re discussing Max’s excellent artistic ability, a news flash of the one year memorial of the storm comes on. Then clear mood change begins to sweep through the room.

A Look Into the Future

Max starts to see glimpses of the future, however not noticing them as the future yet. It takes a toll on her and fractures her sense of reality. Chloe and Max attend their new indie band friends gig, where they seem to be enjoying themselves, but while at the gig, Max starts to lose her sense of the reality she is in, and loses Chloe, as if she did not exist in Seattle in the first place, she seems to have a panic attack, then snaps back into reality. Chloe grabs Max and tells her that they are headed back to Arcadia Bay.

This comic sees a different version of a Max. She can’t control the power within herself, a Max lost in time. The art is not child-like nor adult-like, more of an all ages sense of comic.

Overall It is an enjoyable read, and well worth your time if you are a fan of the Life is Strange franchise.

The Life is Strange comics, brings us back into Max’s universe, and does so in a creative and enticing way, to make me comeback and want to read more.