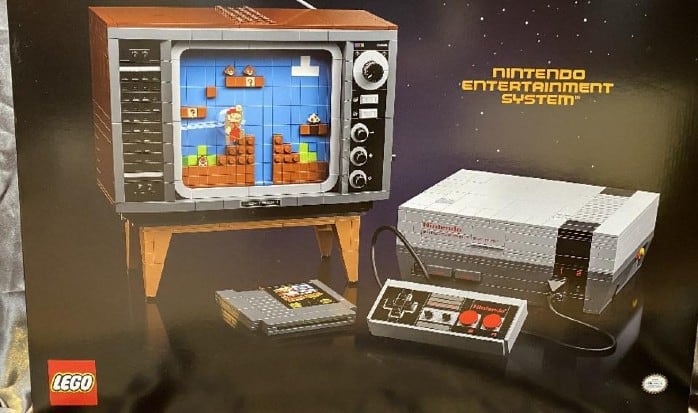 Pictures of a supposed LEGO set revolving around the classic Nintendo Entertainment System (NES) have surfaced, which has caused LEGO themselves to post a tease for the new kit.

As seen in an article posted earlier today, VJGamer obtained images of what appears to be a LEGO model focusing on Nintendo’s first console, the NES. Based on said images, it seems that a replica CTR TV playing World 1-1 from the original Super Mario Bros. game, an NES controller, and an NES cartridge of Super Mario Bros. will come along with the console as a building set. The full package will reportedly contain 2,646 pieces, leading to a price of €299.99, according to German website Promo Bricks. The site also claims that the set will release on August 1st alongside the LEGO Super Mario sets.

Other leaked pictures lend to the notion that this NES set will work in conjunction with the previously announced LEGO Super Mario kits, as you can see the Mario figure sliding into the top of the CRT TV. A crank can also be spotted on the side of the TV, indicating that you can alter the image on the screen to some degree.

LEGO likely became aware of these leaks, as the official LEGO Twitter account posted a tease for the set shortly after the images made their way through the web. The tweet shows a GIF of a silhouette – likely that of the NES set itself – along with a tagline stating, “are you ready to play like never before?’

Are you ready to play like never before? pic.twitter.com/XuNFD7rP0B

Do you plan on purchasing a LEGO NES set? Let us know in the comments! For more things, Nintendo, check out the rumor involving Breath of the Wild 2’s voice acting supposedly wrapping up. Otherwise, keep it on Culture of Gaming for all things Gaming!

Oscar Navarro
Oscar is a writer for Culture of Gaming. He is an aspiring video game journalist that follows anything and everything Nintendo. His favorite franchises consist of Pokemon and Kingdom Hearts.
Latest posts by Oscar Navarro (see all)
Post Views: 6