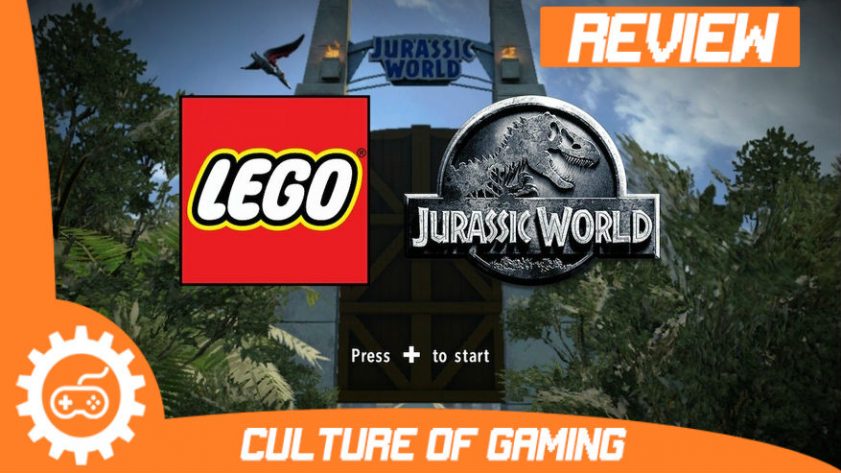 Lego Jurassic World made its debut on the PS4, Xbox One, and PC in 2015. The Nintendo Switch port does a remarkable job at keeping all of its original gameplay elements, which is both good and bad. While the game is fun and still features its neat dinosaur ‘build-it-yourself’ functionality, it also retains the same missteps of the original game such as bad audio issues and its linear open world. Otherwise, it’s still a fun Lego game to play and perfect for the Nintendo Switch for both its portability and second Joycon play.

I’ll be honest in mentioning that I never played the original game that released in 2015. Several outlets and gaming personalities enjoyed the game but it seems that the discussion boiled down to Lego Jurassic World being just another LEGO game. I wasn’t excited to review Lego Jurassic World for Switch but its portability intrigued me. I played Lego The Lord of the Rings on Playstation Vita and that game made me lose faith in having good Lego ports for a handheld. Surprisingly, Lego Jurassic World looks amazing on the Switch but still lacks the finesse and visual fidelity of its counterparts. One thing I did not expect is the effort TT Fusion went to summarize each movie and its comedic slant.

Lego games in the past used comedic elements to make up for the lack of voice acting. TT Games always has a knack for creating fun and hilarious scenes explaining the plot in older games like Lego Star Wars. Part of that was lost in its transition to last-gen when Lego properties started adding voice acting with mixed results. Lego Jurassic World uses audio from the movie itself to tell a bite-size version of each movie in the franchise. Sometimes the audio mixing is great and works well but other times it sounds like someone is copying a song of a speaker with their phone. It’s still a notable improvement from Lego The Lord of the Rings, and Lego Jurassic World even includes new voice lines.

TT Fusion creates scenarios both through cutscenes and during gameplay to address or poke fun at inconsistencies in Jurassic Park franchise. One particular moment that stood out for me was in The Lost World section. There’s a famous scene in which people are running away from a T. rex and hide within a waterfall. One of the people hiding is startled by a snake, ruining the safety of the waterfall, only to be eaten by said ferocious dinosaur outside. TT Fusion gives that scene a nod when Lego characters shrug, in unison, during that exact moment.

Other times you’ll have NPCs making funny side comments about their current predicament within a level. Lego Jurassic World does the franchise justice by having some fun and making the movies kid-friendly. In many ways, this game does a better job at summarizing most of the movies than the movies themselves. The Jurassic World section seems to be the best fleshed-out considering that the levels felt longer and had more phases to them.

Lego Jurassic World does include several islands with tons of collectibles, mini-quests, and unlockables to pursue. Players can access all parts of Isla Nubar and Isla Sorna with the looks of their respective movies, which include Jurassic Park, The Lost World, and Jurassic Park 3. Jurrasic World’s island is its own world even though it is supposed to take place on Isla Nubar. Lego Jurrasic World is a semi-open world with each story level unlocking a new section of the map. Once the story is complete, you can access all of the story levels in Free Play to unlock hidden items, new characters, and Amber pieces. Lego Jurassic World’s open-world is limiting when considering how TT Games made huge open worlds for Batman and Marvel.

It works well enough as a portable experience but it again shows a step backward for Lego games even though it does create a consistent and even pace for Lego Jurassic World. Lego Dimensions made sure that each property included in the initial wave had a huge world to explore. Lego Jurassic World’s walls are clear on where you can or can’t go, which is a shame considering that it would have been fun to make your dino and explore these islands on a bigger scale. If you’ve played Lego games before, then you’re in for more of the same.

Lego Jurassic World is a good port and it doesn’t seem like a visual downgrade when compared to the Xbox One and PS4 versions. Playing on the Switch means that you’ll always have a second player controller handy when playing with friends and family. The light-hearted tone and comedic elements help sell this game towards families who want to play with dinosaurs. All in all, it is the definitive Jurassic Park game with tons of replayability and a neat dinosaurs creation mode once you’ve collected the right DNA pieces. I would recommend picking this game up if you haven’t played it and you’ve played Lego games before. Lego Jurassic World is fun even though some of the human characters are lackluster and boring. Its all about those dinos in the end though? If you’re here for that then you’ll enjoy this linear romp through each island.

Thanks for reading! Don’t forget to check out some of my other reviews like They Are Billions and Super Mutant Alien Assault. For more great interviews, reviews, editorials, and news stay tuned to CultureOfGaming.com or check us out on OpenCritic.com.

LEGO Jurassic World is almost an exact port of its 2015 counterparts. Which includes all the good and bad aspects of the game including bad audio from the movies and its linear open world. On the other hand, it makes for a great on the go which you can play anywhere with a friend using a second Joycon. Expect a level of quality that isn’t the best that LEGO games have to offer but do a good enough job to entertain Jurassic Park and Dinosaur fans alike.