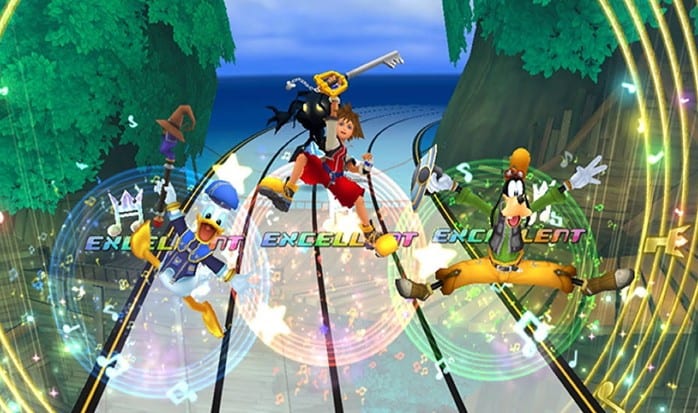 Square Enix has just released a new trailer that covers all the new Kingdom Hearts content planned for the rest of 2020. In it, a new rhythm game called Kingdom Hearts: Melody of Memory was announced, along with new gameplay of the upcoming Kingdom Hearts: Dark Road mobile game.

Kingdom Hearts: Melody of Memory will take classic moments from the RPG series and incorporate rhythm-based action and mechanics similar to Square Enix’s other rhythm game, Theatryhythm Final Fantasy. The game will feature over 140 songs from across the series’ entries, including various Disney songs that appear in the games. The trailer also showcases various characters returning, such as Sora, Donald, Goofy, Riku, Kairi, Hercules, Aladdin, and more. Kingdom Hearts: Melody of Memory will release on PS4, Xbox One, and Nintendo Switch sometime in 2020.

Square Enix also shared new gameplay for the previously announced Kingdom Hearts: Dark Road – a mobile game following the early days of the series’ main antagonist, Master Xehanort. From the footage in the trailer, it seems that the game will use card-based mechanics in the same vein as Kingdom Hearts: Chain of Memories. However, it does appear that this title will incorporate turn-based battles instead of real-time ones. This makes sense, as the developers of this project also worked on another Kingdom Hearts mobile game, Union X. Kingdom Hearts: Dark Road will release on June 22 in Japan, with no current release date for other countries.

Did you like what you saw in the trailer? Do you plan to play Melody of Memory or Dark Road? Let us know in the comments! For more things Kingdom Hearts, check out our article on what could be done with a Kingdom Hearts TV series. Otherwise, keep it on Culture of Gaming for all things gaming!