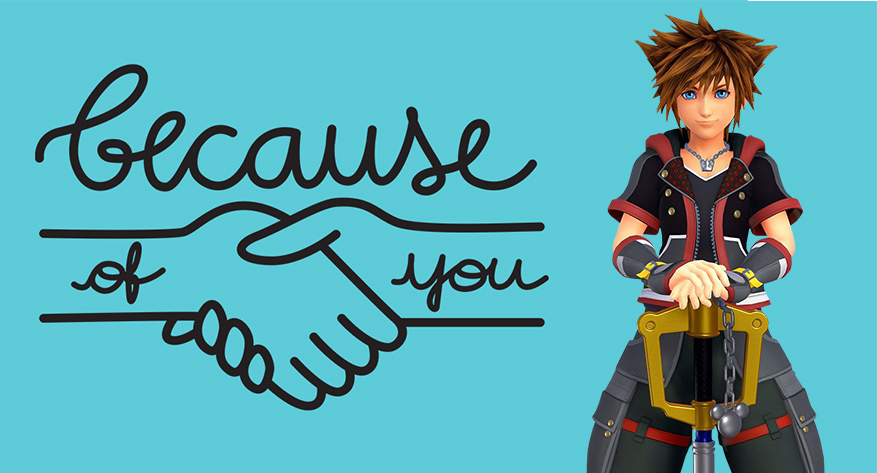 Square Enix has partnered with the ad council to contribute to their anti-bullying campaign, Because of You. As part of this partnership, clips from Kingdom Hearts 3 will be shown in promotional videos for the ambitious campaign. It’s a stellar contribution to a noble project, but you might be asking: why Kingdom Hearts 3?

Square Enix believes that Kingdom Hearts positive message conveys a necessary tone for cheering bullied victims. Brendan Docherty, senior of product management at Square Enix, reiterates the company’s belief. “At its core, the Kingdom Hearts series is about the power of friendship and helping those in need in order to overcome darkness. The Kingdom Hearts story is filled with characters overcoming trials and tribulations through friends helping and supporting each other in tough times. We thought these themes matched very well with the valuable life lesson of the Because of You campaign.”

The ad council sees Kingdom Hearts 3 as a factor to reaching as widespread an audience of teens as possible. Anastasia Goodstein, SVP of Digital Product Management at the Ad Council says as much: “Because of You is all about how your actions, for better or for worse, can have a big impact on those around you, and helping teens think about how those decisions could affect others. KINGDOM HEARTS III is one of the year’s biggest game releases, and we’re excited to see the game’s message of support and friendship reach millions of teens. It’s a great fit with our campaign’s idea that everyone should reflect on the power of their actions.”

For the past few years, the gaming industry has become more consciousness of real-world social and economic issues. We’ve seen Microsoft’s adaptive controller, an initiative to help handicap people escape through video games. We’ve seen the yearly 25-hour “Extra-life” charity stream, where thousands donate to St. Jude Hospital. And, there’s now this anti-bullying message from Square Enix. It’s touching to see that the industry is taking time out of its incredibly busy release schedule to support wonderful causes. We hope that it only continues.

For more on information on Because of You, be sure to visit their website. And for more on Square Enix, Kingdom Hearts, and everything else video games, stay tuned to Culture of Gaming.