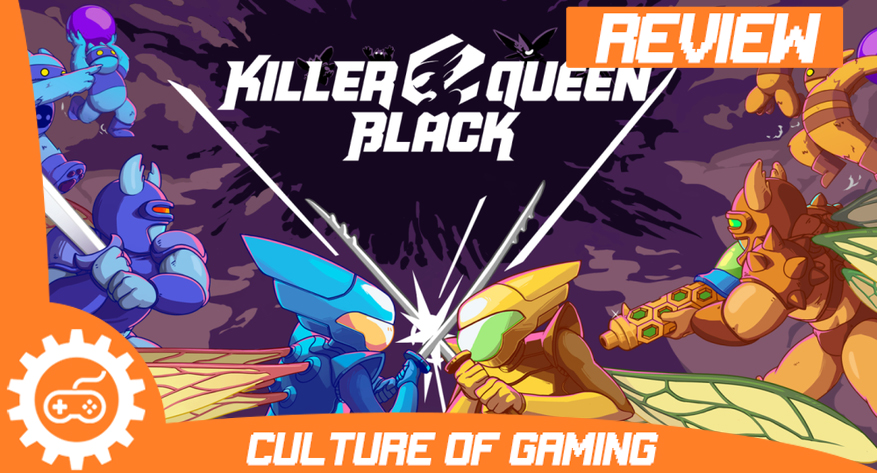 Thanks to the wonderful people at BumbleBear Games & Liquid Bit. I got the chance to try the anticipated competitive indie game, Killer Queen Black. Killer Queen Black is an intense, online, multiplayer action/strategy hybrid. Up to 8 players complied of 2 teams compete against each other. Hop on the snail, hoard berries, or wipe out the enemy’s queen to achieve victory.

Now this game has received quite a bit of buzz in the indie gaming community. It received its popularity from its first appearance at the arcades and convention show floors. So today, I’ll see if this game can live up to its expectation. Before I start, keep in mind that I barely got the chance to play the multiplayer game mode. That’s because it was due to me living in Australia and most reviewers live in the US so there was a strict time restraint to play with them.

The Buzz Of War

For a simple-looking indie game, this game has quite a bit of depth to its gameplay aspect. Like I said before, the game is a multiplayer action/strategy hybrid game. What I mean by that is why this game is a fast-paced action game. You still need to think on your toes while on the battlefield and think about what you should do to help the team. There are two types of characters you can play as. The Drones, which focus on defending the Queen, moving the snail, collect berries and attack the opposing queen. The Drones can transform into Warrior Drones to kill the opposing Drones and Queen. Or they transform into Speed Drones.

Then there’s the star of the game, The Queen. The Queen’s role is to survive as much as it can, activate warrior gates for the workers and fight against the aggressive enemy force. While the Queen is powerful, you must be careful as you only have three lives. And if the Queen lose all three lives, it’s game over. The gameplay is surprisingly very fun, especially if you’re the Queen. You have to be quick and be able to predict all the other opposing members maneuvers so you can survive. But that’s just the core gameplay, now let’s talk about some of the core strategies.

Now that I have established the rules and concept of the game, time to talk about the three strategies to win. Firstly, we have the “Economic Victory”. To achieve this victory, the workers must collect enough berries to fill up all the empty holes in the hive. Second is the “Miltary Victory”. The way to get this victory is to kill the enemy Queen 3 times. This also applies to your Queen as well. Lastly, the final victory you can get is the “Snail Victory”. Drones must hop onto the Snail that is placed in the middle of the map and ride to the end of their side of the map. However, there is a major downside. If you don’t have a Warrior or Queen defending you, you are left wide open to attack.

My personal favourite is “Miltary Victory”. Soley because sometimes I’ve got into an intense situation where several enemies tried to strike me down when I was a Queen. But that’s not to say that the other victories aren’t fun. The other two offer fun experiences with any situation that could occur. However, there are some small grips I have with the game. I wish you didn’t have to repeatedly press a button to fly up. It does sometimes lead to inaccurate landings. Also, I wish there was a Vs. CPU option since it was hard to find online games during the reviewing phase.

This will be a brief section mainly because all I can do is praise the visual and sound design of the game. Starting with the visual design, the game has a great colourful pixelated art style. It utilizes it well, especially in the character designs of the Drones and the Queen. I personally love the Queens for both the blue and gold team look. The animations of all the characters are astonishingly cool and sometimes even cute like when the Drones deliver a berry to their hives. The only thing I wish for is more variety in terms of the environment in the stages. The ones I saw were primarily green looking stages.

Up next is probably my favourite aspect of the game, the music and sound design. The games overall music theme is heavy metal. I didn’t expect it to fit well with this type of game but somehow the devs were able to make it work. It’s so satisfying whenever someone gets killed, an epic guitar string plays and it managed to get me giddy. The sound effects for all the characters and their moves sounded great as well.

In the end, I loved playing Killer Queen Black even though I didn’t manage to play much of it. The gameplay is fast-paced and exhilarating. The ways to win were well varied and open to a lot of replayability. The art style is delightful enough that it didn’t get old to look at. The music and sound effect were amazing in my opinion, managing to somehow fit into the overall style of the game. If you’re looking for a fresh new competitive multiplayer game, then you might want to check out Killer Queen Black. I definitely will be playing it a lot once it’s officially released to the public.

For more reviews like this, keep up to date with Culture Of Gaming for news, reviews and all things geeky.

In the end, I loved playing Killer Queen Black even though I didn’t manage to play much of it. The gameplay is fast-paced and exhilarating. The ways to win were well varied and open to a lot of replayability. The art style is delightful enough that it didn’t get old to look at. The music and sound effect were amazing in my opinion, managing to somehow fit into the overall style of the game. If you’re looking for a fresh new competitive multiplayer game, then you might want to check out Killer Queen Black. I definitely will be playing it a lot once it’s officially released to the public.