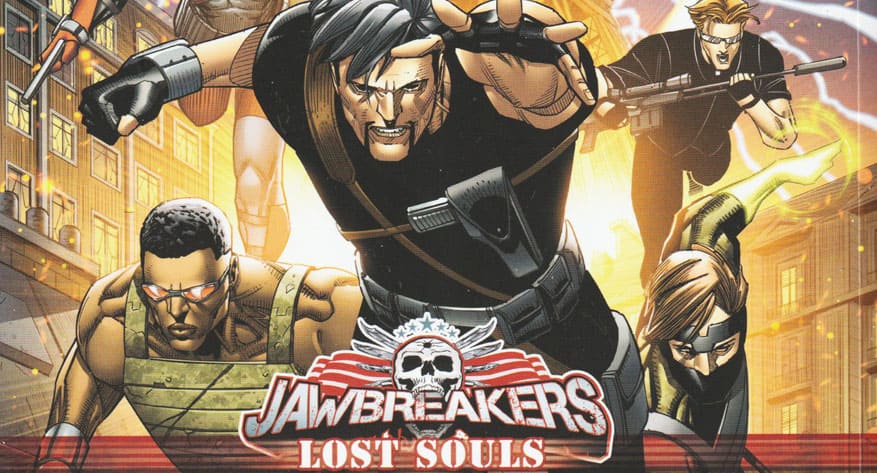 You see, for some strange reason in America, personal politics and business go hand-in-hand in some people’s minds. These people also don’t seem to understand simple economics or that civil public discourse between opposing, contrasting views is how any society grows and evolves.

As a Canadian, I don’t care where my barber lands on the political spectrum as long as they cut my hair right. I don’t care what my waiter thinks about capital punishment. I just want good service before, during and after my meal. I don’t care what the politics are of any postal employee as long as my mail gets delivered on time and my letters and packages don’t appear to have been handled by a group of angry gorillas in the process.

Myers’ detractors claim he is Asmodeus himself. His defenders say his words and his actions prove otherwise and his critics just don’t like the way he roasts their work or the way he candidly censures and lambastes the ailing comic book industry.

Who is right? Who is wrong? You be the judge.

No matter what you think of Myers as a controversial figure what is true is that he is currently suing comic book writer Mark Waid for defamation and tortious interference. Tortious interference is when an individual purposely damages someone else’s contractual or business relationships with a third party causing economic harm.

At the heart of the case, Myers is accusing Waid of directly interfering in the Jawbreakers publishing contract he had with Antarctic Press compelling them to cancel the deal. After Antarctic Press parted ways with Myers he crowd funded and self-published Jawbreakers on his own under his Splatto Comics imprint.

In recent years, never has there been so much public controversy surrounding a comic book. To find a book that had so many tongues wagging and so many fists shaking you would probably have to go back to that Amazing Spider-Man seventies story arc that Stan Lee published despite disapproval from the Comics Code Authority. The ones in which Norman Osborn took up the mantle of the Green Goblin and started abusing drugs.

The curious thing though about the whole Jawbreakers uproar is there is nothing controversial about the book or the story at all. One part King Kong and one part The Expendables or G.I. Joe, Jawbreakers is just a straight-forward superhero adventure story minus any political overtones.

It is the type of book Myers himself has advocated for.

There are a few quick jabs here and there though. There’s a scene in which a former kingpin of crime has been reduced to running a hot dog cart. That can be seen as a poke at Mark Waid as well as pressing home Myers’ position that comic book creators are in fact no different than food truck owners whose role is to produce grub which satisfies hungry customers and to promote that food not hound and drive away customers with political preaching and insults.

The graphic novel is divided into two parts, the Lost Souls story and Book One Remastered, which Myers says in his introduction is more about tone and story than slick art work.

The Jawbeakers team consists of leader Silkworm, Hell Priest, Knife-Hands, Kuffz and Killswitch. Mirroring The Expendables or The A-Team, the Jawbreakers represent Myers’ love of action films and nineties comics. The Jawbreakers are a renegade mercenary team who quarrel more than Princess Leia and Han Solo, yet, somehow, they seem to always get the job done.

Their job this time is to track down, subdue or kill a colossal gorilla in Nigeria for client named Xaxi, a scantily clad native woman who has ties to some mystic something or other.

Lost Souls has the Jawbreakers discovering that all is not what it seems with Grape Ape while riffing on each other with some clever one-liners, scathing burns and a lot of self-deprecating humour.

Book One Remastered has something to do with space, magic and another gigantic pest but Lost Souls is the main attraction. Even though it is a tribute to Jack Kirby I really couldn’t get into Book One Remastered at all. Then again, dimension-jumping stories are not my thing. My favourite heroes are more boots-on-the-ground types like Daredevil, Punisher, Iron Fist, Black Widow, Green Arrow, Moon Knight, Batman and Nightwing.

Although Myers astutely references his own military background to make Silkworm’s banter in leading the team very realistic it sometimes goes too far and the action and the flow of the book suffers because of it. If he pulled back a little, not verbalize every move or course of action by the team, things would move along at a quicker, livelier clip.

Jon Malin’s outstanding art in Lost Souls is as good as or better than his work for Marvel Comics which includes stints on Cable and Thunderbolts. While Myers’ story is enjoyable, it is really Malin’s pencils and Brett R. Smith’s colouring that elevates Lost Souls to Marvel and DC graphic novel quality. There is something about Smith’s greens and blues in the night scenes that make the Nigerian jungle jump off the page as a place right out of a Doc Savage novel. It is magical, beautiful but also dangerous. If you want to see what difference great colouring makes to a comic and how important a colourist’s choices are, just take a gander at Jawbreakers.

If you want to see how abominable cover design can detract immensely from a comic, just take a gander at Jawbreakers. While Ethan Van Sciver and Kyle Ritter’s scene does draw attention to the book, all of the focus is on Grape Ape and not the team. Also, the comic’s logo looks awkward crammed into the top corner like that. It should have been bolder and in-your-face as its job is after all to sell the book.

What does surpass expectations is the quality of the Jawbreakers graphic novel itself. Although Myers is fairly new to the comic book publishing business, the paper stock, binding, everything about the book is the equivalent of what you find produced by veteran comic book companies. That in itself is encouraging and inspiring for anyone who wishes to strike out on their own as a publisher. Myers has proved that if you make the right choices when it comes to content and material, you can produce something that can easily hold its own on any book store or comic shop shelf.

Jawbreakers isn’t a revolutionary story but it is a revolutionary book. Whether you appreciate Myers’ overall message and his work or not, Jawbreakers is undeniably a piece of comic book history. Despite all of the assorted roadblocks in his way,  despite some comic book stores refusing to stock or special order the book for customers, despite not having the infrastructure or the deep pockets of a Marvel or a DC at his disposal, Myers made Jawbreakers a reality forcing the comic book industry to stand up and take notice whether they wanted to or not. Those who came before Myers and will come after him are proving that the market, the industry are changing. The real winners are the consumers who have more alternatives, more characters and stories available to them than ever before if they find the current crop of mainstream books to be lacking, which seems to be the case if the current sales figures are any indication.

THE GOOD
Big action.
Big laughs.
A big gorilla.
That big eye ball scene.
As good or better than any mainstream series being published today.

THE BAD
The design of the cover is just awful.
Book One Remastered is a downgrade in quality and just wasn’t my type of story.
Military dialogue trips over itself.

Jawbreakers doesn’t set out to change the world instead it is just delivers a cool adventure story with lots of humour, action and no political grandstanding.