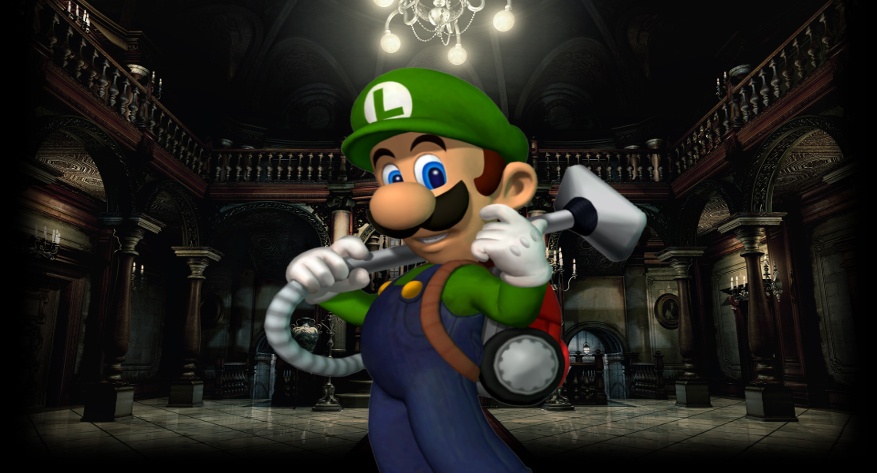 As a Resident Evil fanboy, I feel that it is my duty to talk about something. I feel very strongly about a certain topic dealing with Nintendo. That topic focuses on the underdog of the entire Nintendo Universe, Luigi. Luigi’s Mansion is a staple title with Nintendo now and has since gained a ton of traction. What I believe in all my horror title love is that Luigi’s Mansion is just Resident Evil Lite.

THE CASE OF LUIGI’S MANSION

Let me start by letting you know that I am a huge Luigi fanboy. He is my favorite Nintendo character by a landslide. I have never been big into the perfect hero of Mario. I love a good flawed underdog rising to become a hero. Characters like Duke Nukem are fun, but Peter Parker is a much deeper character. Flawed traits make a hero more relatable. We all have things we cannot overcome and that sometimes we are forced to. With Luigi, he must overcome his crippling fear of pretty much everything.

Luigi is a more interesting character to follow on his adventures. He is terrified of ghosts and yet, his game is centered around him capturing them. He overcomes and is able to save his “perfect” brother. However, the true nature of the game is that of uncovering secrets in an old mansion. Does that not sound like something familiar?

So where does Resident Evil come into my discussion? In the 1996 game, it focuses on a group of people trapped in an old mansion filled with horrors that they must overcome. The way they do so is by collecting items to backtrack and fulfill a requirement in a past area to proceed in the story.

Along the way, they fight creatures and bosses to progress. In Luigi’s Mansion, he must combat basic ghosts and boss ghosts to collect items and upgrades needed to backtrack. This backtracking leads Luigi to past areas that with his new items, he can fulfill requirements to proceed in the story.

These two games are simply separated by difficulty, gore, and the overall scariness rating. So in theory, Luigi’s Mansion is Resident Evil for kids. However, it is not just simply a kid’s game, as I am a huge fan of the series and love it.

IS LUIGI’S MANSION A METROIDVANIA?

Another theory I have come across from other Culture of Gaming team members is that Luigi’s Mansion is a Metroidvania. If you have no idea what that style of game is, it is basically a game that requires you to collect power-ups to proceed in a maze-like world. Much like Metroid and Castlevania. Culture of Gaming author Mike Szoke mentions it in his retro review of Luigi’s Mansion.

The case for this is pretty convincing honestly as you do upgrade Luigi’s gear to accommodate past areas for access. I would say that I could agree with this notion in the fullest. I would also have to admit that Resident Evil, my favorite game series of all time is too a Metroidvania. This is a fact I could be happy to admit to as well, seeing as my second favorite series is Castlevania.

Luigi’s Mansion could be called a lot of different things, such as horror or a Metroidvania. I guess at the end of the day, all you can really call it is a great game that is giving the underdog Luigi his own franchise. He is a flawed, lovable goof of a character that in the most desperate of times rises to be a hero. That type of hero is one that is universal in every aspect.

Luigi’s Mansion 3 is right around the corner and coming out for the Switch. You can go to the official website and check out all the goodies from the new game! I cannot wait to make my own green goo Luigi to bypass some awesome puzzles!

If you too are a horror game fan like myself, Culture of Gaming writer Ryan Warner did an excellent article on narrative in horror games. You should check it out!