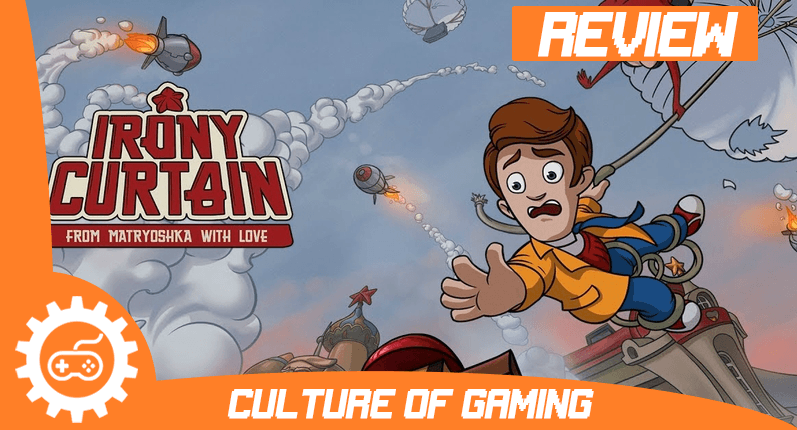 I got the chance to try out Irony Curtain: From Matryoshka With Love, a satirization of the point & click adventure genre. The game was both developed and published by Artifex Mundi, a respectable Polish indie game studio. They smuggle you out of your comfort zone, throwing you into the middle of Cold War spy intrigue where there’s an even bigger game being played.  This is not your typical spy game like Metal Gear Solid or Splinter Cell. Experience Matryoshka through Evan – a low-ranking, goofy journalist involuntarily pulled right into the middle of an espionage stand-off between two powers. Experience a story full of unpredictable twists and turns and discover the true agenda of the mysterious Supreme Leader.

While this game has been out for a while on PC, I played up to chapter three on the new PS4 version and I have quite a bit to say about it. So, without wasting any more time let’s jump into Matryoshka and see if this tale of espionage will surprise us or not.

You can find out more information about the game and its team here.

Irony Curtain is set in an alternate reality unbound by historical accuracy. You play as Evan, a gullible, dopey journalist who gets pulled into an adventure full of spies and secrets. You will meet quirky and unique characters throughout the story, like the mysterious Leader ruling Matryoshka with an iron fist and the brave and witty Agent Anna. The story itself has a corny and satirical take on ideologies like communism and socialism. It doesn’t take itself too seriously and is packed with funny dialogue and cartoonish characters and set pieces. The narrative style of the game reminds me of a classic Saturday morning cartoon

Evan is a fun and likable protagonist, and he appears to be a satire of point & click adventure protagonist characters. Almost every joke Evan says or is the butt of lands very well, especially when he interacts with objects. I haven’t seen much of the side characters except for Evan’s parents and the seductive Agent Anna, but from what I’ve seen, they both have unique characteristics which help makes the story more enjoyable.

The art style, for the most part, is really appealing as a charming little point & click adventure. It reminds me of the classic kids’ games like Putt-Putt and Spy Fox. However, I do have two issues in terms of the art direction. Firstly, while everything has a distinct and compelling art style, Evan himself has a 3D model. Sometimes it distracts me and throws me off from the rest of the art style, especially since you will be focusing on Evan most of the time.

Secondly, the cinematic cutscenes seem like they’re a downgrade in terms of art style. It reminds me of online flash animations or a video you would find at NewGrounds.com.

But besides that, the in-game backdrop and characters look great, featuring stylistic effects such as smoke or adorable details in the environment. For example, I just entered Matryoshka for the first time and the scenery reminds me of a cartoonish mix of Mordor from The Lord of the Rings and typical Russian architecture. The music itself is nothing to write home about, but it’s still enjoyable enough to suffice. Thankfully, the music doesn’t have that annoying repeatable loop that I’ve seen other point & click games do, especially when you are trying to solve puzzles.

A Return to Classic Roots

I’ve talked about the story, the characters, the music, the visuals but time to talk about the most important aspect: the gameplay. The game is a point & click adventure game, so there isn’t too much to talk about. Irony Curtain reminds me of classics like Sam & Max or The Adventures Of Monkey Island. One thing I would like to say off the bat is that this game is friendly to genre newcomers. Fortunately, I’m a fan of the genre and have played games like these in the past. However, even I had an issue figuring out puzzles at the start because I didn’t know some of the functions of the games due to a lack of tutorials.

But I thoroughly enjoyed my time with the game once I got a grasp on its mechanics. It is nice of the developers to give various hint options for those who are struggling. However, I never found myself needing any to get through the game. Most of the puzzles were fun, although I wish there were a few more challenging ones. Each level of the game was uniquely different compared to others. From Evan’s House, to a news station, to Matryoshka itself, it all gives you something to stay interested in the game.

One small issue I do have in the game is not having the ability to cancel actions. Sometimes I accidentally clicked on an interactive that I don’t want to examine and I have to wait for Evan to finish walking to the location of the object. This all sounds good and fine, but it doesn’t do much to innovate on the genre it’s based on in terms of gameplay itself. In the end, it’s your typical point & click game with a funny, satirical story.

In conclusion, I found myself having a fun time playing Irony Curtain. Despite some of its flaws, I recommend those who are fans of point & click games to give it a shot. I definitely plan to continue through the game and see how the story ends. Perhaps my OCD will kick in and tell me to get the platinum trophy as well!

For more reviews and opinions on Irony Curtain, check out Open Critic here.

Are you interested in the Irony Curtain: From Matryoshka With Love? Let us know in the comments below, follow us on Twitter and join our Community Discord.