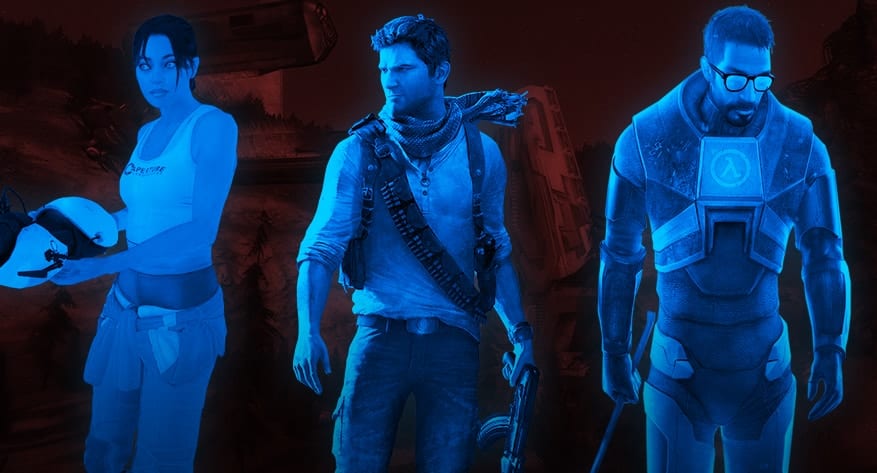 Don’t get me wrong, I like The Witcher 3, Breath of the Wild, and Bloodborne as much as the next guy. But what ever happened to the plethora of hand-holding, mollycoddling games of the early 2000’s and 90’s? I’m talking about Valve classics like Half-life and Portal. I’m talking about classic FPS’s like Halo. Heck, I’m talking about the original God of War games. Remember when those used to guide you on a strict, point A to point B path? Been a while, hasn’t it?

The realization hit me when I was playing through Uncharted: The Nathan Drake Collection recently. The Uncharted series has practically no exploration. It’s a set-in-stone narrative, letting you witness the story of Nathan Drake’s adventures while you tag along for the ride.

For example, over the course of Uncharted 2, Drake jumps over cliffs, shoots down helicopters, and narrowly escapes from exploding buildings, all at an exhilaratingly rapid pace. And when you die from a fire-fight, you’re taken back, at most, 30 seconds. It’s meant to be quick, straight-forward, and to the point.

What’s more, Uncharted is simplistic in its moment-to-moment gameplay. You’ve got two mechanics: climbing and shooting. That’s it! One moment you’ll be gunning down soldiers in a war-ridden city street, and the next you’ll be climbing up the side of a skyscraper to get to the pool on top. Sometimes, you do both of these things at once – like the time you hang from a cluster of billboards, hopping from one to the next and popping enemies in the head. It’s simple, it’s clean, and it’s awesome!

In Uncharted, there are no RPG stats to min-max, no animals to tame, and no upgradable weapons to worry about. It’s just you, your guns, and your suspenders, jumping from building to building while all sorts of crazy explosions go off. Who cares that I don’t have upgradable health? I just rode a train off a cliff!

Naughty Dog clearly does linearity extremely well, but arguably, Valve does it even better. Their single-player games push you along a pre-guided path that constantly feels like you’re breaking the boundaries.

Take, for example, the Portal series. These fantastic puzzle games lead you gracefully from one portion of Aperture Labs to the next, running frantically from maniacal robots GLaDOS and (later) Wheatley. And even in the moments where you’re poking behind walls of the claustrophobic test chambers, the level design is propelling you into the next chapter of the narrative.

Half-life. God, I love Half-life. Both the first and second games are, for the most part, linear. But that only heightens the sense that each area seems unique. In Half-life 2 specifically, a single path takes you on a wild goose chase through an oppressed city, a dirty waterway, a zombie-infested village, an open freeway, and a highly guarded fortress. I think my favorite moment in that game is when you’re wandering along the City 17 rooftops, no weapon in hand, sneaking above the soldiers that were bossing you around a few minutes ago. Then you get your first pistol and BAM! The fight is on.

These are the kinds of games I miss the most, when I think about them. Sure, there have been a few linear masterpieces in the last couple years (see examples: Titanfall 2, Devil May Cry V, and Bayonetta 2). But more often than not, triple-A releases are striving for bigger worlds, more side-quests, more mechanics, and bigger horse testicles. That last factor references Red Dead Redemption 2, a game so massive in story and scope, that its own morality and wanted systems are thrown by the way-side.

Or take Bloodborne, an action-RPG with all the trimmings of a Metroidvania. Bloodborne is a game you can get lost in, quite literally. You can wander the intertwined streets of Yarnham for hours, wondering where the heck you’re supposed to go next. When you finally get there, the reward of a challenging fight is often worth it, but the time spent trying to figure out the destination can feel like a sunk effort.

I enjoy Overwatch quite a bit – when a match goes well for me, of course. But even at the end of an assault round, where my team came together in an overwhelming final wave, I can’t help but feel I haven’t made any tangible progress. Of course, I have, even it’s an incremental change to my playstyle or reflexes. But what objective am I working toward? A higher number next to my icon? That sounds a little hollow.

Of course, the entire notion of a video game having a practical end-goal is a bit meaningless. We define our own version of success, whether it be getting to gold rank in Overwatch, or playing through the entire Zelda series. A fall into the latter camp – perhaps that’s why I’m so nostalgic for linear video games.