How Games Have Been Altered in Different Countries 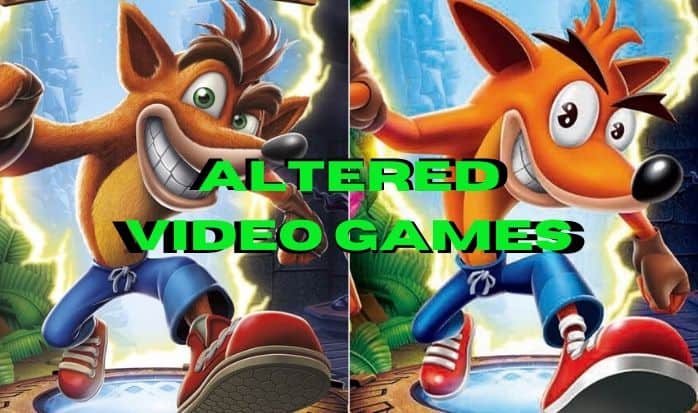 It’s no secret that video games are altered based on the countries they are released in. However, some games are changed so much; they don’t even look or play the same as other versions. From censorship to character design to title changes, here’s a list of video games that have been altered in different countries.

Crash Bandicoot may be the best example of the way games are altered based on where they’re released. When Naughty Dog brought the idea to Japanese Sony executives, they weren’t thrilled with the look and style of the character. In fact, they believed the character was so unappealing; games would not do well in the Japanese market.

On Andy Gavin’s (the co-creator of Crash Bandicoot) blog, he recounts his experience with Sony. Though the Japanese Sony executives thought the graphics of the game were good, they weren’t fans of Crash’s look. During the meeting, executives and developers took a break. Gavin says during this fifteen-minute break; he asked Charlotte Francis, the artist behind Crash.

Using everything he knew about Anime and Manga at the time, Gavin asked Francis to redesign the character. He says:

“I asked Charlotte if she could close Crash’s huge smiling mouth, making him seem less aggressive. I asked her to change Crash’s eyes from green to two small black “Pac-man” shapes. And I asked her to make Crash’s spike smaller. And I told her she had less than 15 minutes.  With what must have been her last energy, she banged it out.”

Francis’s redesign sold Sony executives and approved the game for the Japanese market.

In the game, the differences are only minor. Crash looks the same in both versions of the game. However, at the end of every level, only one box will fall on Crash’s head in the Japanese version (as opposed to multiple in the other version) if the player has missed any treasure boxes. In the original game’s bonus levels, Tawna stays behind when Crash completes the level. In the Japanese version, she will disappear.

To see what else is different, check out the video below:

Note: This section of the article may be considered NSFW.

Most of the alterations found in Rockstar‘s Grand Theft Auto V have been caused by censorship. In the U.S. version of the game, players can explore all of what the city of Los Santos has to offer. From drugs to strippers to violent crimes, Rockstar did not hold back in the making of this game. In places like Japan, however, required developers to censor portions of the game to make it more suitable for players.

In Japan, GTA V received a “Z” rating–meaning players must be 18 years or older to purchase the game. Despite this, many of the more explicit scenes have been altered or completely deleted. For example, in the U.S. version of the game, Trevor’s introduction shows him having sex with an NPC on his kitchen counter. In the Japanese version of the game, this part of the scene has been completely removed.

During another mission, Franklin must act as paparazzi and take pictures of a movie star (who is known for her innocence) having sex in her backyard. This mission was altered to depict the star smoking instead.

One of the final major changes made to the game involves Trevor’s controversial torture scene. In the original version of the game, players control Trevor and determine what methods he uses against his victim. However, the Japanese version of the game skips over this portion of the mission altogether.

Minor changes have also been made to the game. For example, nudists in the original game are shown wearing underwear in censored versions.

To see more about the changes made to GTA V, click here.

Several games have received title changes depending on what part of the world they’ve been released in. Some of these alterations are unexplainable, while others may have to do with translation issues.

One example of this is the Resident Evil series. In Japan, the series is called Biohazard. According to Kotaku, the reason for the change is because, in 1994, a game by the same name had just been released. Biohazard was a DOS-based game that Capcom‘s Chris Kramer described as “crappy.” Kramer went on to say they didn’t think they would be able to secure the trademark for the Resident Evil series in the U.S.

You may be thinking, “Wait, isn’t Resident Evil 7‘s title ‘Biohazard?'” and yes, you’d be right. In Japan, the game is still called Biohazard, but the subtitle is “Resident Evil.”

The survival horror series originally released in 2001 and has three different names. In the U.S., the series is called Fatal Frame. However, in Japan, the series is called Zero, and in Europe, the series is Project Zero. There isn’t much information available about why this change happened, though there is some speculation that it’s simply a translation error.

For anyone who’s seen Scott Pilgrim vs. the World, you might remember Scott’s famous “pick up line” to Ramona Flowers. The quote is as follows:

“Did you know that the original name for Pac-Man was Puck-Man? You’d think it was because he looks like a hockey puck, but it actually comes from the Japanese phrase ‘Paku-Paku,’ which means to flap one’s mouth open and closed. They changed it because they thought Puck-Man would be too easy to vandalize, you know, as people could just scratch off the P and turn it into an F or whatever.”

Well, this is actually true. Midway, the American distributor of the game was actually concerned the arcade machines would be vandalized in the U.S.

One final example of how a game has been altered in a different country is Doki Doki Panic. The game was a Japanese game developed by Nintendo. The story, which takes place in a book where dreams determine the next day’s weather. The game is a platformer and was originally designed in collaboration with Fuji Television to help promote “Yume Kōjō ’87,” a festival made to promote Fuji Television’s products.

The game was then altered and released on the NES as Super Mario Bros. 2 in the U.S. This was because the original second Mario installment in the U.S. being too difficult and too similar to the first game. Mario replaces Doki Doki Panic‘s main character Imajin and Luigi takes the place of Mama.

Other notable alterations involve the game’s visuals. Shells were originally blackface heads, mushrooms were hearts, magic potions were magic lamps, and 1-Up Mushrooms were the playable character’s head. There were other visual changes as well; these are just some of the major ones.

Let Us Know What You Think

Do you know of any other games worth mentioning? Let us know in the comments or on Twitter @thecognetwork.

For more on what’s going on in gaming right now, click here.