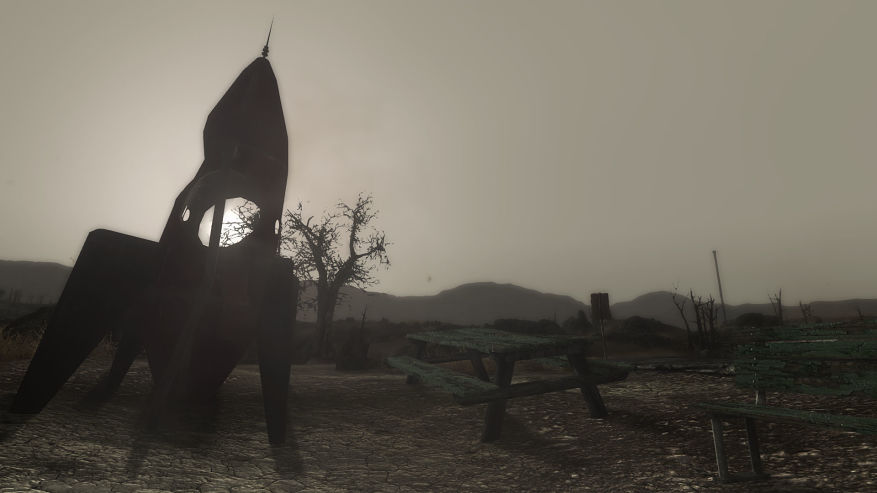 It is easy to believe that as a franchise progresses it will continue to improve. Many times this is the case. Sometimes it’s not. I believe a game that thrives on constant combat might improve from innovation and technical capabilities. A contemporary example of this would be the Batman Arkham series. Each subsequent main series game improves. Although Arkham Knight wasn’t as good as Arkham City, Knight was definitely more fun. A more primitive example might be the first three NES Super Mario games. Super Mario Brothers 3, in my opinion, is the best game.

With that being said, many games deteriorate as they progress technically. I’ve found that many of the franchises affected once thrived on their isolating ambiance. As a franchise progresses, and as the franchise adapts to reach new technical heights, it only makes sense that the environment would become livelier and less desolate. However, is that such a good thing?

Fallout has suffered from this. I have beaten Fallout 3 seven or eight times. I have beaten Fallout: New Vegas twelve times. It might seem a little obsessive, but I honestly couldn’t get enough. As you walk through the barren wasteland of each of these games you feel lost. You can walk for long periods of time without seeing a single human being. This is the franchise’s allure for me. I remember almost losing my mind in this world. The wasteland, in my opinion, is supposed to feel lonely. In the wasteland, you are supposed to feel an emotional discomfort believing you one of the few left.

In the newest Fallout game, I never felt this discomfort or isolation. Fallout 4 was extremely lively and bright in comparison to its predecessors. Now, it might be a strange complaint about those looking at Fallout 4’s world from the surface. However, if you compare the last and most recent game in the franchise directly, a difference will be seen.

Fallout 4’s tone almost seemed goofy in nature. In Fallout 4, It felt like there was an NPC to talk to on every corner, and don’t get me started on the settlement building. I mean, isn’t the whole point of a wasteland to be a waste…. land. Listen, I’ll level with you, I spent dozens of hours building settlements, but it completely took me out of the narrative. Due to my inflated playtime, I guess I have little justification to complain. Yet, when I look back on my experience with Fallout 4 I don’t remember the succulent isolation I felt with the two previous Fallout games I had played.

Although not required, worrying about the happiness of a settlement doesn’t sound like a fulfilling “wasteland” experience to me. The Fallout franchise wraps its atmosphere around the juxtaposition of optimistic 1950’s America and the horrid aftermath of an apocalyptic war. Obviously, the light-hearted culture needs to be pertinent. I feel the desolation needs to take priority. I like Fallout 3 and New Vegas more than Fallout 4, not because I’m a purist who wears rose-tinted goggles, but because I am an escapist. Fallout 4 failed to give me the tools for escapism, and I believe this was due to its “improvements” over its predecessors.

For a long time, BioShock Infinite was my favorite BioShock game. I loved the tone, and I loved how the story wasn’t as grounded as the previous two BioShock games (which is saying a lot). Recently I had the urge to play through each Bioshock again. As the credits rolled on the final game in the franchise, I had a realization: my favorite is the original.

Fallout 4 left a sour taste in my mouth, this wasn’t the case with BioShock Infinite. I absolutely love BioShock Infinite. However, Infinite pales in comparison to the original. When you arrive in Rapture for the first time, you witness the violent murder of a Rapture citizen. As you clench onto your controller, nothing chills your spin more effectively than the words from the radio in the Bathysphere: “My name’s Atlas, and I’m fixin’ to keep you alive.” The sheer horror from Rapture skips its stop on the way to Columbia.

Now, I cut Infinite a lot of slack because maybe horror wasn’t the point. Yet, horror is in my opinion BioShock’s best attribute. In Columbia, you witness the fall of a utopia, and in Rapture, you witness the aftermath. As you emerge in Rapture, the city has already failed. Although purposefully divergent, the games are in the same franchise. Thus, the law requires comparison. The original terminates your ability to see a “sane” human being who isn’t separated by glass until the third act. This adds to the seclusion of the game’s enriching undercurrent.

The constant presence of NPCs in Infinite overwhelmed me. Elizabeth was almost constantly by your side. Although I loved her character, I never felt the exile that was so compelling in the original two games. At one point in Infinite, there is an all-out war. The “rebellion vs the empire” if you will. During this scene in the game, you have support via a barrage of foot soldiers. There is no equivalent to this in the previous two BioShock games. Was this because of the games differing tones? Or was it because of each game’s differing capacity?

The original Bioshock released in August 2007 – only two short years after the launch of the Xbox 360. BioShock Infinite released in March 2013 – six years later, and light years ahead of its predecessor technologically. The developers used the resources and experience they had attained. I think Irrational Games were at a point where they could test the capabilities of their software with existing hardware. They had mainstream appeal, and they could create a more lush and vibrant world. Thus, Infinite was born.

Can We Have It All?

With my thick-rimmed glasses and soy latte equipped, I encourage you. Allow isolating experiences to exist. Allow yourself to get completely lost in a compelling experience of quarantine. I marvel had how varied the gaming industry is. I only hope the feeling of seclusion in games won’t be replaced by the feeling of awe. Slowly, developers are establishing a priority on the magnitude of a game. They’re losing their appeal to create this isolation in their games. Although not necessarily mutually exclusive, both are equally as important.