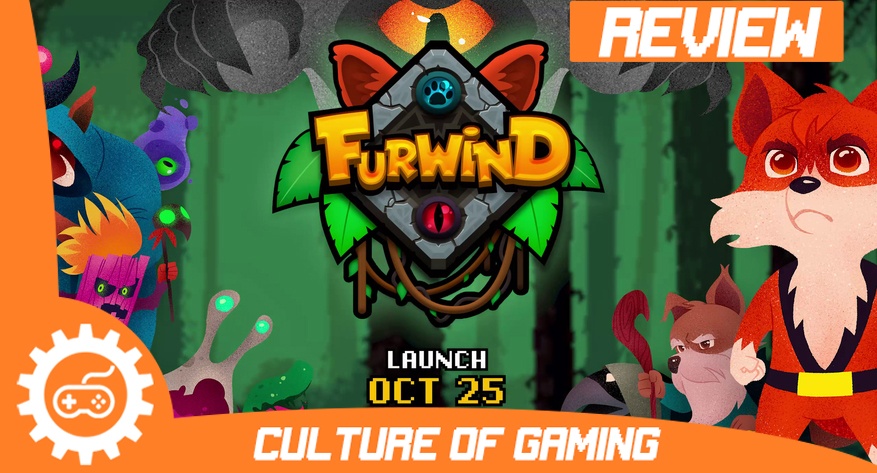 I was recently given the opportunity to try out the newly released Nintendo Switch version of Furwind, by Boomfire Games. Furwind is a colourful, pixel art style action-platformer that evokes the challenging classics of the old days. The player embarks on this epic adventure in which a little fox will fight the ominous darkness that is invading its world.

I played this game up until the end of chapter 1 with a 100% completion rate. So, let’s find out if this game is an indie gem or another run of the mill indie game.

The story of Furwind is about the Darhûn cult awakening an old evil trapped deep in the woods. Later on, the village of the protagonist, Furwind—who looks like a fox type character—has been consumed by flames at the hands of the malicious shamans of the cult. Before securing the survivors, Whiteclaw, the clan chief asks you to end the terrible evil that threatens all the inhabitants of the jungle.

From what I’ve seen, the story is simplistic. And, the characters I’ve met, including the main protagonist, are all too forgettable. In addition, the voice acting is mostly a gibberish language, similar to Banjo-Kazooie. The exception is the introduction narration, which is presented in a normal, English voice. Compared to other indie or AAA 2D platformer games out there, the plot is nothing special or interesting.

The most important aspect of a 2D action platformer is the gameplay. So, how is it?

Unfortunately, from my experience, the gameplay is really underwhelming for various reasons. First off, the movement of Furwind himself feels very slow and inaccurate. For whatever reason, there is no sprint or run action, so I just find myself walking in these large, wide open stages which feels very tedious after a while. It sometimes even becomes frustrating when I have to reset a level, or backtrack to an earlier area.

Secondly, for an action adventure game, there’s only one primary attack, which is a tail swipe.

However, there are secondary abilities that use a consumable function, and you can even obtain new abilities later in the game. For example, after completing a required trial mission, I earned an air dash ability that requires limited feathers to use. These secondary abilities do add some variety into the game, which is pleasing since you start off with barely any moves.

I have also noticed that jumping is a bit sluggish sometimes, and there are some input issues. But, that might be the fault of the Nintendo Switch version and its controls.

In the main mission themselves, the enemies and mini-bosses are so overused and repetitive that I lose interest quickly. However, although I find the main missions repetitive, the optional missions are really fun and I enjoyed overcoming the surprisingly complex challenges where you have to be patient and precise.

Ok, so the story and characters are forgettable, the gameplay is sub-par, but how is the world itself?

Well, firstly, the music is great, with a Celtic woodland tone to it which helps me get through the levels. The sound effects are mixed, some sounds are great and fit well into the world, but some feel awkward to the point where I feel like there are some royalty-free sound effects in there.

Next up is the graphics. With the pixelated art style being the standard for indie games, it sometimes feels over-saturated, so it’s hard to stick out.

Unfortunately, the graphics and the environments itself are nothing to write home about, unlike similar games such as Celeste and Bloodstained. However, the animation has nice details and feels smooth. Which is nice whenever an action is performed, or when the background is subtly moving.

In conclusion, Furwind is a bland, forgettable 2D platformer and it’s hard to point out some outstanding features. With all it’s flaws, there are some positive things such as the music. I can’t picture myself going back to this game more than once when I finish it, especially with other great indie games out there at the moment.

For more reviews and opinions on Furwind, check out Open Critic here.

You can buy the game for $10 on Steam right now or on PS4, Vita, and on the Nintendo Switch.