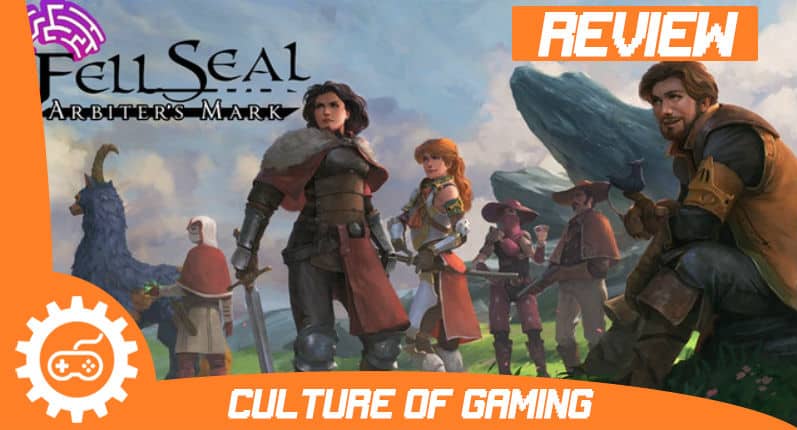 As someone who enjoys RPG’s, I usually try to avoid the Tactical RPG. It’s easy to manage a few people in your party at a time, but trying to micromanage several at once makes me feel rather guilty when my carelessness gets a few of them killed. So as you can imagine, going into Fell Seal: Arbiter’s mark made me feel concerned if I would enjoy it. Thankfully, my worries were for naught and I enjoyed the game far more than I first thought.

Developed by 6 Eyes Studio, Fell Seal: Arbiter’s Mark has been in Steam’s Early Access since August after raising $45,000 on Kickstarter. Fell Seal is dubbed as a spiritual successor to other classic tactic RPG titles like Final Fantasy Tactics and Tactics Orge with a few more additions to the formula.

The Story of the Arbiters and Immortals

Centuries ago in the land of Teora, an otherworldly beast known as The Maw ravaged the lands. Thankfully, seven heroes defeated the beast and achieved immortality. They would form the Council of Immortals that would rule over the land and enforce order, and the Order of Arbiters to enforce their will and protect the land.

Arbiters wield absolute authority although things soon become complicated when the story begins. Kyrie leads the Arbiters as she and her apprentice Anadine arrest a nobleman who just murdered someone. Upon bringing him in, he is released from prison as one council member selected him to go on a pilgrimage to become the next Immortal Council member. Those who are Marked are considered being “Above the Law” although Kyrie follows him on his pilgrimage as she knows someone like him would never have been considered for such a role.

What will the Arbiters discover? And is there corruption in the council? The story can be rather engaging and fun to watch unfold as the plot expands out much further than its initial premise.

When working with the Arbiters, it helps to keep your options as flexible as possible. Luckily, you can do quite a lot with customizing your troops.

Each character can pick a primary and a subclass to use in fights. By carefully molding your characters through fights, you can give them a variety of skills and abilities for them to use. You can let your mender also have access to the witch doctor class to help boost their healing capabilities or have them go with the Wizard so they can attack or heal when it’s their turn.

With over 20+ classes to unlock, there’s plenty of options to choose.
Alongside with the main characters, you can also recruit more character into your team to help in fights. While these characters might not sound like anything special, the cool thing here is how much you can customize their looks. You could create a wide variety of unique units, or make an army of shirtless men with Red Afros.

Quite a bit of customization options to make your own unit of choice.

If I were to find one minor gripe with the character customization, it would be how the character portrait rarely matches up to the character you’re making at all. You could try to make a character based on the picture, but not really the other way around.  Still, it’s fun to have a wacky-looking character and have their picture be a skeleton.

The Art of Tactical War

When going into each fight, you will set up which units would be appropriate for the upcoming skirmish. While you can set up story characters front and centre to help you, recruited units can let you set up a team literally in any way you desire (as long as you have the gold). I know I got my mileage from having an extra healer on the team to better manage everyone’s health.

The fights can be rather entertaining as you carefully position your heroes to get the edge on the enemy. While you could attack from the front, you can gain an extra edge if you attack from the sides or behind. Even when the map stacks the edge in the enemy’s favor, there are plenty of ways to fight back and pick up a win. There’s a lot of depth to the combat, but it shouldn’t feel too intimidating for newcomers.

As fun as it is to level up your heroes, learn new skills and abilities and unlock new classes, there can be one problem that some might run into. As with many tactical RPGs, the ability to level up your characters can be problematic. Whereas in other RPGs anyone in your team gets to enjoy the EXP earned, Tactical RPGs only give EXP to those who take part in the battle. While your front line attackers won’t have any problem with this, other units might run into a bigger problem if they cannot perform an action.

You might have to go on patrols to grind out levels and ability points. It isn’t too bad, if you are struggling on one or two missions, you’ll likely have to grind to develop new skills and not get overwhelmed by enemy numbers.

If you are familiar with tactic RPGs, then Fell Seal will be right up your alley. For the rest of us, it can certainly be intimidating when you first start playing. When you start a new game, you can tweak a lot of variables to fit your playstyle. You can choose from the various difficulty presets, or you can change specific things to make things easier for you, or give you a bigger challenge.

Choose from a preset difficulty, or pick your unique poisons.

Among these choices, is the game’s Injury System. There is your standard “Permadeath” where if you lose someone on the battlefield, they will remain dead, but Fell Seal has other options available in case if you don’t want to risk losing anyone. Should someone fall in a fight, they can become injured, this way lowering their stats. You can make it permanent, or set it where a character can recover from their injuries if they sit out of a fight. If you want to avoid playing with this system, you can turn it off. Otherwise, it is a nice way to help incentive you to not lose anyone in your team during a skirmish.

Overall, I found it to be a fair system, and while it can’t be changed once you start, it can help you shape the experience you want to have.

Games on Kickstarter usually get a bad wrap when the final product comes out, but thankfully, Fell Seal: Arbiter’s Mark does a fantastic job in its execution. For those who enjoy Tactical RPGs, you will get plenty of mileage here. For those who don’t but are curious, it serves as a welcoming first step.

The game did get to me at times as I did my best to manage the units as best as possible, but I’m glad I could check it out. A fantastic game I would easily recommend to anyone who is looking for a nice game to play and enjoy with an engaging story and seemingly endless possibilities.
—-
For more Game Reviews, Be sure to follow us here at Culture of Gaming. And of course, check out Opencritic.com

THE GOOD
A beautiful looking game with Hand-drawn environments
Tons of ways to create your own units right down to the classes and skills they use
Can set up your own difficulty and death penalties
Engaging Story
Lots to do in Fell Seal including the end game.

THE BAD
Grinding can be tricky

The game did get to me at times as I did my best to manage the units as best as possible, but I’m glad I could check it out. A fantastic game I would easily recommend to anyone who is looking for a nice game to play and enjoy with an engaging story and seemingly endless possibilities.