Far Cry 6 Diego, What is Your Role? 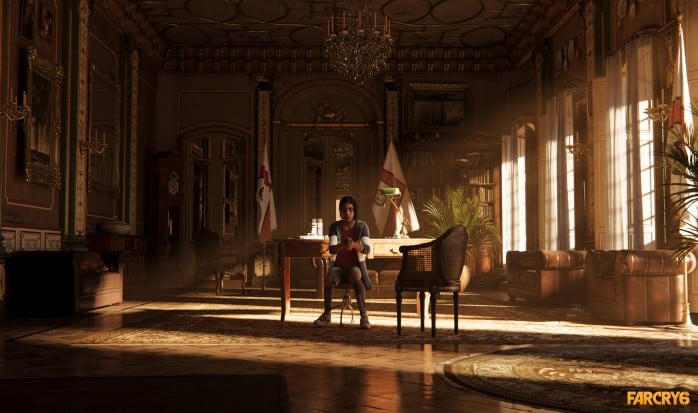 If there’s one thing that can be said about the Far Cry series, it is how Vaas from Far Cry 3 was the best antagonist we’ve ever gotten. An actor who was so downright spectacular in his audition, the developers gave Michael Mando the leading role. Vaas was unforgettable, so much so that you actually forgot who the “main bad guy” of Far Cry 3 was. Far Cry 6 seems to have someone else with a lot of promise too, Diego.

None of this is to say Pagan Min or Joseph Seed were not good antagonists in the sequels, but there’s no denying Vaas’s charisma was one reason fans fell in love with the franchise upon its reinvention. So how can you hope to come close to recapturing lightning in a bottle for Far Cry 6? Well, having the Drug Boss from Breaking Bad and Miguel from Coco is a good start.

But yeah, no joke. Anthony Gonzalez was Miguel in Coco and will be the voice actor of Diego Castillo in Far Cry 6. Between him and our El Presidente Antón Castillo (voiced and modeled after Giancarlo Esposito), we could see a rather unique dynamic between the two. A man who wishes to hold power over Yara (a fictional Caribbean Island inspired by Cuba) and to one day pass it onto his son. Just off the premise alone, you could say we might have a rather unique villain situation since we know where Antón wants… but what about his son?

No, none of this is going to be based on the ‘Diego is Vaas’ theories that are floating around either. It was a fun theory, but honestly, it could undermine a possible ticking time bomb that is Diego Castillo. After all, what is his role in Far Cry 6 going to be?

…someday, you will become El Presidente

From the trailer alone, it is clear that Diego Castillo is going to play a rather significant role as we watch his father teach him how the country they rule is like a grenade. What is great here is that while we have grown used to the villains being insane, psychotic or paranoid, Antón seems calm and focused.

It’s almost like this was something he went through with his father when he was younger and it serves as a rite of passage for Diego to go through the same. He knows what his status as “El Presidente” means in his obvious Dictatorship, but it is clear that he isn’t doing this solely for himself.  If anything, it could be the idea of preserving a legacy, but he does care about his son.

And really, what better lesson to teach your boy than to show him a grenade that has “Death to Castillo” scribbled on it? It is probably well known by Diego his life is practically set in stone and what his calling is going to be. The only thing left to figure out is just what kind of person Diego will become. He doesn’t wish to be evil. He doesn’t wish to be a monster. But the people on the street? He’s his father’s kid. A harsh way to judge a teenager, but a lesson which Antón does have to teach him.

Are you Evil? Are you a Monster? Prove it, Diego.

So why does it look like Diego Castillo is set to be the most interesting character with the most potential in Far Cry 6? It’s hard speculation but consider the following: What if the actions you take could change the “morality” of Diego? This isn’t anything new to have the means to pick and choose the “ending” of a Far Cry game, but let’s consider what that choice would be here.

Let’s say that during the course of Far Cry 6, you not only encounter Antón, but also his son, and the actions you take while you are nearby him influences what he might do at the end.  Chances are that if you are some kind of murderous guerrilla soldier fighting to overthrow his father, he could see that his father might have been onto something about gripping that grenade tightly or watch everything around them go boom.

But let’s now say that he sees that your character is a “Guerrilla fighter who is fighting for freedom, to restore the nation back to its former glory,” then he might realize his father’s teachings are a ‘bit off’ and see just how dangerous he really is (even though giving your son a grenade and suddenly pulling the pin should have been a major first clue).

How Far Cry 6 could end

That brings us to what is probably going to be the most interesting aspect of the game, how the end of Far Cry 6 could play out.

There’s a very good chance that before the end of the game, Antón will either be dead or close enough to it and it will force Diego into making a choice. This time, it isn’t the player who makes the choice, but the kid. Based on the actions you took throughout the game, Diego will have to decide what future he wants to take.

Will he see his father for all the evil things he did and want to steer the country towards a better future for all? Or will Diego see his father was right all along and take action against you and the revolution to ensure a future for all (by means of adding a tighter grip than his father)?

This isn’t to suggest that by the end of Far Cry 6 we will get to watch our protagonist brutally murder a teenager, but perhaps if you steer Diego towards seeing how things can be better, maybe he can still be a leader, but one who is for the benefit for the people and not just for himself.

Then again, chances are he will be quick to draw to the conclusion of “You killed my father!” and suddenly we have a teenager with an army who wants to see you dead at any cost… Oh, the possibilities…

What do you think of Far Cry 6’s Diego?

Could Diego Castillo have the potential to become a memorable villain because of the teachings of his father? Will there be a choice that will allow him to choose the man he wishes to be? Are we really going to consider the possibility of us ending the legacy by taking out both father and son?

Leave your thoughts down below and be sure to follow us here at Culture Of Gaming for more articles covering Far Cry 6 and other things in the gaming world. Or check out Ubisofts Far Cry 6 reveal here!

Michael Solseth
How’s it going everyone, I’m Mike Sol and I am one of many contributing writers to Culture of Gaming. You can usually find me playing some of the latest games to come out, although I tend to avoid anything related to sports or strategy. I enjoy the big three and all the games on them but my main console is the Xbox One. I don’t have a specific preference in gaming, but any game that has fun action and beating up waves of enemies is usually my cup tea. If you ever want to game with me or want me to write about something of interest, feel free to hit me up.

I also now have a personal blog where I go into deeper thoughts about things happening in the gaming world. Please come and check out Mad MAS Gaming here: https://bit.ly/31kPLMA
Latest posts by Michael Solseth (see all)
Post Views: 44