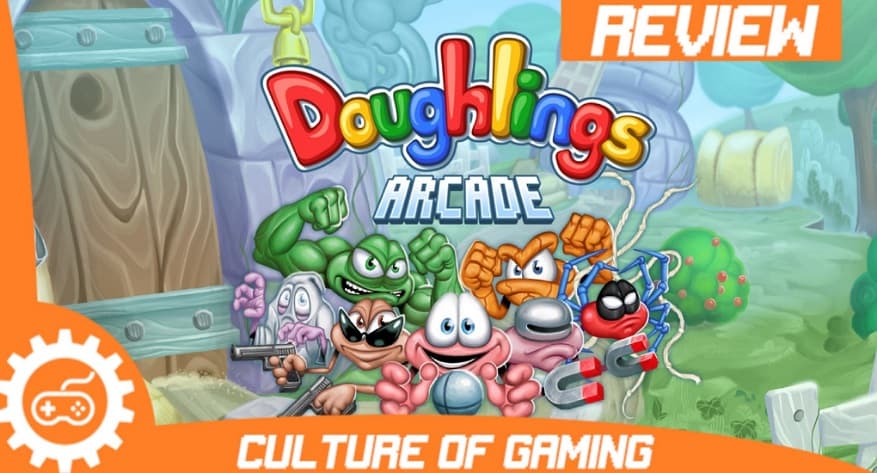 Doughlings: Arcade is a light hearted, comedic take on the block breaking style of gaming in the likeness of a Pong and Peggle love child.

Doughlings: Arcade was created by the team over at Hero Concept For PC, Playstation 4, Xbox One, and Nintendo Switch. The game was released on May 9th, 2019. If you’re interested in picking up Doughlings: Arcade it’ll run you $6.99 USD.

While it may not be this years Game of the Year, for those looking for simple arcade type games with an enjoyable base game, and a level creator with online capabilities, then taking a risk on Doughlings may be worth it.

In the peaceful world of Doughlings, everything was right for its people. They led simple, but happy lives. Unfortunately, that all changed. One day a meteor struck their land, and from it released a poisonous gas. This gas had dire effects on the citizens. It made them go crazy with rage, and once that was over, it turned them to stone.

Fortunately, our protagonist found out how to save the day. You play as Dr. Morpheus. So, your job is to fight back against your own kind. Doing so with an antidote administered through an orb you fling at them. While that’s certainly the main idea, there’s more to it. Going through the game allows Morpheus to craft new elixirs. Because of this you may upgrade certain abilities, and even utilize gene splicing upgrades found within.

As mentioned previously, this game plays like a love child of Pong and Peggle. Its a block breaking arcade game so that’s understandable. The game play centers around you throwing your ball up at the Doughlings to give them the antidote. This is similar to the Peggle game mechanics of popping every bubble. But there’s a catch: you have to keep hitting the ball up into the air much like Pong. Letting the ball hit the ground results in death. For some reason.

While the basic game play isn’t very unique, later levels and power ups acquired create a fun time. Sadly that doesn’t occur until much later in the game, resulting in repetitive game play and some levels that seem to drag on for just a tad too long.

One quality the game does nail very well is difficulty. If you’re not patient and good at timing, this game will be very painful for you. This does result in some more repetition, that the amount of levels and time needed for significant game play changes, certainly does not help.

The game truly shines with its level creation. This feature allows you to make your own levels, so you can create the necessary levels of difficulty needed for you to receive enjoyment from the game. Plus as a bonus you can also access levels created by other players. So, the amount of content you can get from the game is technically infinite, and this mode helps bite the repetition of the story mode in the butt.

The downside is that for your own creating, the different items available to use are locked until you encounter them in the main mode. While this is a reasonable feature to put in place, the main mode is ninety levels long. Ninety levels that drag on and feels closer to one hundred and eighty levels. So, it can be discouraging. Luckily you can play other people’s levels that have said items still.

The Culture of Dough

The art is very simple. The doughlings look weird, but are fitting in their functionality. The background art is very well done though. While it’s also a simple style, it has a certain level of ambience to it. Seeing as how the backgrounds usually showcase some form of destruction caused by the diseased doughlings, that’s rather impressive.

The music is also catchy. This is basically a requirement for any good arcade game. Since the player will be consistently listening to the same handful of tracks. The team at Hero Concept hit this on the spot. Even after hours of playing, I was never tired of the music.

Doughlings: Arcade is a fun, albeit repetitive experience that’s saving grace is its level creator. Arcade fans and block breaker fans will definitely enjoy this game. It’s a simple, humorous adventure with enough to content to justify its low price. But beware the game’s flaws before deciding to pick it up.

Want some more reviews? Head on over to Open Critic for plenty more!

Doughlings: Arcade just barely misses the mark. A great concept hindered by repetitive game play and levels that drag on too long.