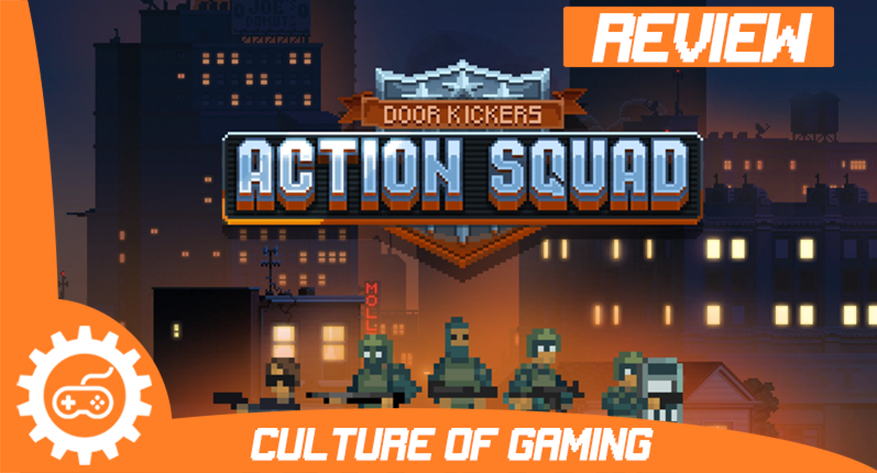 Just with one glance at this game, you can tell that it is made for some co-op shenanigans.  They even make a point to show how boring and pointless playing by yourself would be in the trailer.  So with that in mind, I dive into Door Kickers: Action Squad with my friend, and R6 buddy, Andrew (follow him here). And let me tell you, there are many shenanigans to be had.

There are other ways to play the game?

Why yes, yes there is.  Should you? No, no you shouldn’t.

You do have the options of single player, random co-op and friend to friend co-op.  But nothing is as enjoyable, and necessary, as the final option. There are points where it is pretty much impossible solo, and others where you need to coordinate with the other person.  On top of that, there is nothing like mocking your friend for running head first into a suicide bomber.

Let’s Kick Some Doors Down

Speaking of enemies.  The developers, Killhouse Games and PixelShard, did a good job at mixing in new enemies as you progress through each level.  Introducing them whenever it feels like you are starting to plough through the current baddies.  Each one feels unique as well. Whether they stand there to throw a Molotov at you from atop a building or back away from the door you are kicking down to take aim, each type feels like they have a thought process to their actions fitting to their role.

On the other hand, the level design seems like it needed a bit more variation in it (at least through the classic mode).  Most of the time you will be going through floor by floor clearing a building and kicking doors.  While fun, it felt repetitive at times. But there will be levels that stand out time to time.  One such level is “Flying High”, but I will not go into detail about it to save some of the fun for you.

There are weekly challenges, an infinite tower and a zombie mode as well.  Each brings so much variety I needed when playing through the main game.  The zombies are all new enemy types, ranging from crawlers to little boomers who can poison you.  Interactions have also changed between the standard enemies and these new ones.  And while the interactions are as you imagine, it’s nice seeing a bit of life brought into the world.  Then when you add the infinite tower,  being exactly what you think, you have quite the selection to choose from.  So whenever you feel it getting stale, switch modes and go.

I felt this belongs in its own genre because there is quite a bit to unpack.  And with the choice between 5 well-crafted operators, you will understand why.

To start, we are going to go with the loudest and proudest first, Breacher. A shotgun-wielding man who, in the wrong hands, has no regard for human life.  I mean, when your difficulty is “lol” and you can fire a slug through 3 bodies ( including hostages), it’s kind of hard not to play that way.  Ironically, we had a lot of success with him pairing with the quietest class, Recon.

Here me out on this.  When your character can silently open doors, it makes for quite the surprise for the enemies when they receive a slug in the back.  On top of that, having a silent weapon to boot is like the icing on the cake.

If that does not suit your fancy, try the Shielder.  She can take anything thrown her way, even a head-on explosion.  Couple that with a nice selection of side arms, you have an operator who is very capable.

Want something a bit more classic?  Assaulter is the man for you. Although, being a classic makes him lose a bit of personality compared to the rest.  But that does not make him bad at all. Actually, he is a well-rounded character. I guess that is why his type is a classic, huh?

The last, and in my opinion, the least, Agent Fergie. While I do understand her difficulty is set to be hard, it does not feel fun. This mainly stems from how little HP she has. Coupled with the minimal amount of damage you apply, it feels like running around with a water gun in the middle of a firefight. And I will admit, I do not know how to fix this problem while keeping the difficulty concept the same. But it is something that I think needs to be addressed.

With all of these combos, there is plenty of room for experimentation.  And I highly recommend doing so. Plus, if you and your friend feel the rhythm is too repetitive, do just that.  It will give a breath of fresh air to the game.

An 8-Bit Look and Sound

There is nothing to write home about with this art style.  While each enemy looks unique, there is nothing particularly special.  The same goes for the backgrounds, not doing much more than providing a setting.

Regrettably, the music is forgettable.  With what only feels like 3 tracks, the main screen, the menu, and the level, it leaves a lot to be desired. If there is any deviation from those three, they did not stand out in any way.  And while I understand keeping the design consistent with a retro look and soundtrack to match, but there can be more done to make the two stand out.

Should You Get the game?

It is one of those games that fills a niche genre; being that of an action, co-op side scroller.  With that said, if you have a friend who plays action games with you, then yes, it fills that void well. Being a great source of mindlessness and door kicking. But for anyone else, this is not the game for you.

Don’t expect anything if you plan on flying solo. But you know someone who will run the gauntlet with you, this game will be what you are looking for.