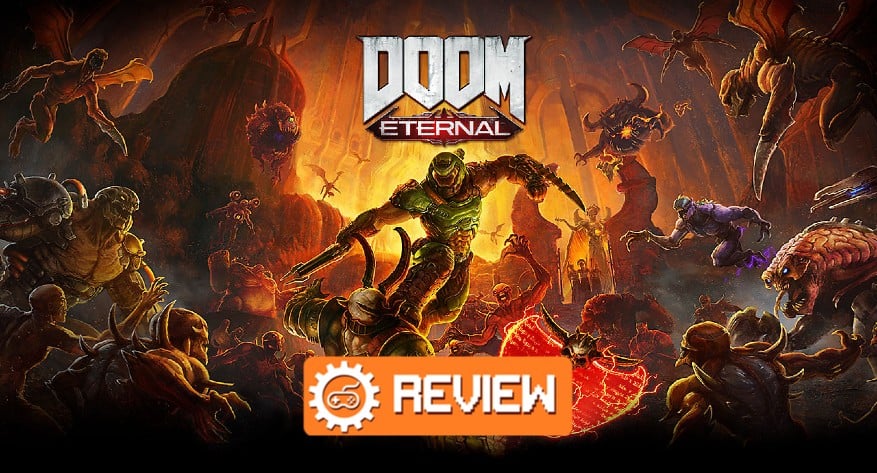 A copy of DoomEternal was provided to Culture of Gaming for the purpose of this review.

Doom or Dewm, as some like to call it, finally got a sequel. A little game called Doom Eternal, which released for all consoles (apart from Nintendo Switch) and blends fast-paced combat with some Ripping and Tearing. Today, I wanted to detail my exact thoughts on the game and just why it has broken so many records barely a week after launch.

Doom Eternal is a sequel to 2016’s Doom and improves on many things from the “Original” Game. Doom 2016 and Doom eternal are classed as a soft reboot to the Doom series and bought Doom to the forefront of players’ minds once more in 2016. A lot of Doom involved ripping and tearing as most Doom games do, but unbeknownst to most players, DOOM 2016 was extremely deep with lore and to the discerning eye, taught players about why the Doom Slayer…. Slays? And just who some of the factions in the game are and where Doom Guy came from etc. Doom Eternal builds on that A LOT, placing story right smack bang in front of the player and tantalising them with Codex Page after Codex Page.

When I first started Doom Eternal, I was not expecting a story that was so in your face or even a story at all for that matter, and it was a bit of a welcome change. For me, Doom 2016 was a great game! But, it kind of felt like I was playing for no real reason other than to rid Mars of the Demon hordes that plagued the planet. Don’t get me wrong, slaying Demons is always fun any day, and Doom 2016 was a fantastic entry into the Doom series. But, It kind of felt like it was missing something.

Well, that’s where Doom Eternal comes in, it offers the player a reason as to why they are slaying so many Demons this time around. It’s not a story as in cutscene story either. To fully understand what is going on in the world of Doom Eternal, you have to hunt down codex pages to fully understand who you are as the Doom Slayer, who the antagonists are and just how you got your godlike powers.

This time around, there’s platforming…. Yes, I know, you are probably wondering… But, Anthony, why do I have to Platform to slay demons? Well, in my opinion, the platforming segments are a bit of a welcome change and break up the fighting segments perfectly. I do concur, however, that there needs to be a bit more Slaying at the start of the game, but aside from that, the Platforming elements are a welcome change. Sometimes, you have to jump up a number of platforms, or navigate a tricky puzzle-like section to find that hidden codex page or secret room that enables you to collect a record or doom figure, but, it’s all worth it in the end.

This leads me to my next segment of this review, the collectibles! Yes, they have made a return this time as well, and they are even cooler than before. This time around, you can collect bobblehead like figures (like in Doom 2016) as well as old music scores from Dooms 1 through 2016. I could easily see myself replaying Doom Eternal just to collect all the secrets scattered throughout the worlds. For the 100% type player, Doom Eternal will suit you perfectly!

There are also hidden boss fight rooms scattered throughout each and ever world this time around where you can collect special keys that enable you to unlock a secret weapon which you can see on your ship early on. This weapon looks mean as all hell and will be something I will definitely try and unlock during my next playthrough.

Many elements of Doom Eternal will be different from old Doom, and initially, you will find the story and many other elements a bit confusing. I recommend watching a couple of Lore videos before playing Doom Eternal just so as you know all there is to know about the Doom Universe beforehand.

The movement and fights have also been turned up to 11 this time around as well. Early on, fights and gunplay are a bit of a challenge to get used to. However, as you get used to the control scheme of Doom Eternal, the game feels so fluid it’s like scratching an itch. The movement and significant boost in speed this time around are a welcome change and allow the player to chain together punches, dashes, and glory kills like its nothing! I can’t stress just how much of an improvement the movement and fighting is over 2016 9Not that 2016 was bad at all) It’s just better!

Some of the smaller issues I did have with the weapon wheel and basic upgrade mechanics of Doom eternal were as follows.

I found swapping between guns kind of confusing. To be honest, I kept losing track of which gun I was currently using and which mod I had equipped to my current weapon. I feel like if there were to be any improvements to Doom Eternal, this would be it! Make it easier for players to know what weapon you have equipped and also what mod you have equipped.

Early on, I also found the levelling up, Praetor suite upgrades, and general gun upgrades to be a bit confusing as well. Later in the game, you do get used to it, but it is a bit of a steep learning curve taking note of all these level up mechanics and such.

The music of Doom Eternal is also an improvement over 2016. Listening to it without context kind of makes it sounds like a clash of instruments. However, while playing Doom, it totally makes sense. It’s like an experience of metal and demon-slaying like no other. Just listen to the Gladiator track, and you will know exactly what I mean. It’s hard to put the Doom Eternal music/experience into words; it’s unique, amazing, and a constant adrenaline rush throughout.

Doom Eternal is split into a bunch of different worlds/levels and allows you to explore some of the Doom Slayers past and also, of course, the present. The world building in this game is nothing short of genius, and some of the puzzle mechanics and Platforming areas throughout are amazing. Also, the level design surrounding fights is rather unique. During your time with the game, you will notice that many different Demons are fighting each other. You can actually use the fighting stages to your advantage and let these demon fights proceed and use them to your advantage. We do see this kind of mechanic in other Video Games, but I have never seen it used in the way Doom Eternal Uses it.

Several old and new Demons also return as well. From Dooms 1 through 2016 as well as some new faces to the fray. The ripping and tearing have never been better this time around.

Overall, Doom Eternal is a great game I would recommend anyone get into. It offers the best of all worlds, from music to the general combat of the game and even the platforming sections and story. Doom Eternal is a must for ALL to play!

Doom Eternal is a thrill ride for anyone who decides to check this game out! Its a love letter to the Doom Franchise and is a welcome follow up to Doom 2016