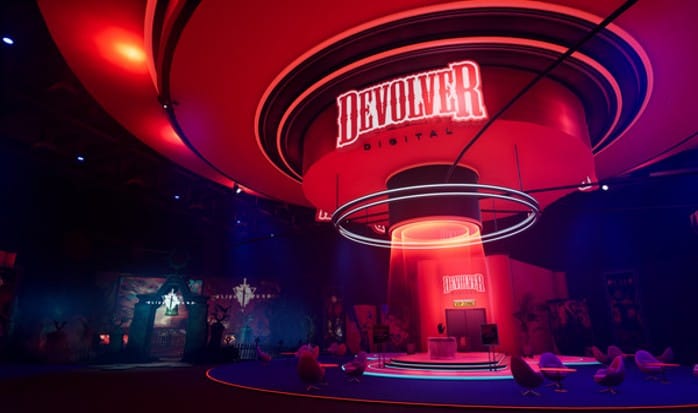 We might not get the chance to enjoy conferences this year, many companies are taking the next logical step in showcasing their games through “Digital Presentations.” While Nintendo was the first, the second company to take advantage of the digital presentation format was Devolver. Of course, their approach wasn’t exactly taking the same serious approach as other publishers take as they would mix the game announcements with parody and take shots at the industry. What started off as “Over the Top” conferences where you see someone gun down or the lead speaker insulting an audience that claps to every word she says has now become Devolver Digital. It is hard to say where you take the concept from there, but the answer they found came in the form of something no one was expecting: A Free Game on Steam called Devolverland Expo.

The Feeling of going (Or breaking in) to an expo

So what exactly is Devolverland Expo?As an unnamed individual who really wanted to see the upcoming games from Devolver, our assailant decides to go in the middle of the night to break in and check out the canceled Expo. Why did they cancel the Expo? Who knows, but the random assortment of security robots could be one reason (or the ominous voice demanding you leave immediately). Still, it can be fun to sneak around the various booths while shooting the robots with a T-Shirt Cannon.

If you want to try and figure out the mystery of the canceled expo, you’re welcome to it, but it can be fun to explore the location and to not only traverse the locations but to see how they set everything up. Once you go into a booth, you can get a good look at how the booth could look in real life as you can see things like “where attendees can play,” or the life-size examples of characters, creatures, or whatever Carrion is. Some can be very elaborate while others can be small, simple, and to the point. Still, it would be awesome to see a few of these booths in real life (although again, the Carrion one will probably have you wanting to keep your distance from it).

Watching all the trailers

So the goal in Devolverland Expo is fairly straight forward. You are breaking and entering into the expo to see the latest goodies from Devolver.  Once you find the big distorted screen, approach it, and watch a trailer that will either talk about the upcoming game or show off a trailer that you probably saw during the Devolver Direct.  Once you finish, you can head towards the next booth until you visit all of them. It would have been funny if we got to see one or two of the made-up titles, but it can be hard to say if there is an actual interest in those titles (unless if they are actually “willed into existence” at Devolver‘s Discord channel #GeraltTub).

It was certainly a fun experience to go into each booth as it did feel like actually stepping into each game’s world while completing the objectives. Almost makes one wish that they took it a step further and perhaps provided a kind of “playable demo” you could play while you are at the said booth, but that probably would have made the install size for Devolverland Expo go much higher than 7 GBs.

This was actually a delightful little game to showcase all your other upcoming games while adding in very forgiving stealth gameplay and a fun little boss fight at the end. If one of the drones do find you, you can still shoot it. And if it does catch you, you just go back to the last checkpoint and you can try again. It would be insane if they did want you to work hard just to see a trailer for Serious Sam 4 or Shadow Warrior 3.

The Future of Video Games and the Future’s Future Future?

Devolverland Expo could be an experiment of sorts. It is one thing to have all the trailers for you to watch, judge, and enjoy, but another to have your own little world to explore to see them all in. In a sense, just like those who attend a gaming conference or a game expo, it can help suck you in and give you a feeling of what it would be like to be in that world; even for a few minutes. What was especially enjoyable was how there was a good handful of titles that they did not show during the Devolver Direct that you would not be aware of unless if you did download Devolverland Expo to see them.

It will be hard to say if “walking around a digital expo” could be the Future Future, but it can probably be a great way to connect with your fanbase whether if they were unable to go that year to experience the games live. Who knows if other companies might consider doing this too, but Devolver does have that unique advantage over the rest considering how every one of those games will (likely) be on Steam.

Could we see a kind of “Devolverland 2021” next year? It’s possible, but for now, it will be interesting to see the full reactions to this. It was short, but still a delight to playthrough (while the achievement hunters aren’t going to be breaking their backs in completing it 100%). Be sure to download it on Steam and enjoy the surreal setting of Devolverland Expo.

Thank you for reading

Be sure to follow us here at Culture of Gaming for more articles covering Devolver and everything else in the gaming world.