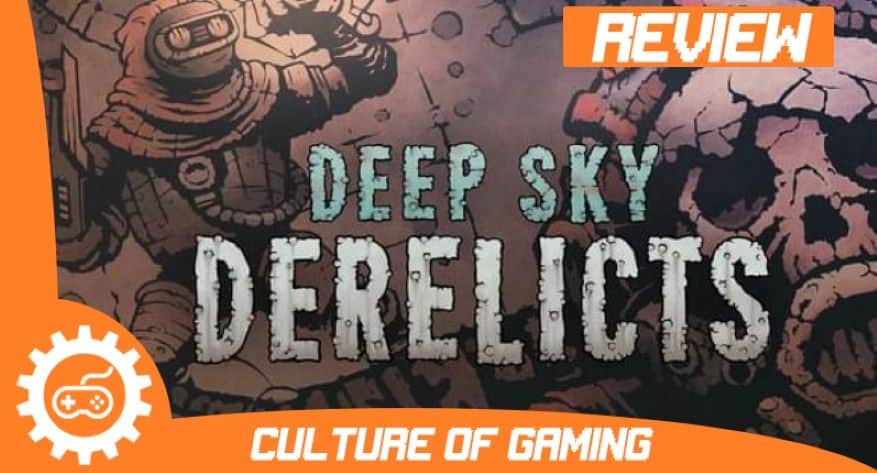 Snowhound Games’ Deep Sky Derelicts is a title you’d expect to be utterly indistinguishable from half a dozen others. Borrowing heavily from other procedurally generated dungeon crawlers like Darkest Dungeon, its core mechanics are more or less identical. But it innovates in so many small ways that it feels like an evolution of the genre rather than another face in the crowd.

The most evident of these innovations is the setting itself. Abandoning dungeons entirely, the game instead tasks you with delving into the lost wreckage of ancient spacecraft in search of the mythical mothership. It sounds simpler, but each derelict is infested with its own variety of nightmarish alien life forms and demented robots, alongside competing scavengers and vicious pirate bands.

The derelicts themselves also dwarf a dungeon in size, with even the earliest being dozens of rooms wide. The size is never too daunting though, as there are multiple unlockable entry points and an upgradeable scanner that can map out large chunks of it for you. In addition, the derelicts themselves are procedurally generated, so while each is enormous, they never feel particularly dull.

Aside from this, the game does employ other roguelike elements, primarily permadeath, but unlike most titles you can disable this through difficulty settings. This normal mode allows you to save and reload freely if you prefer.

The Art of Scavenging

Deep Sky Derelict’s core gameplay loop is fairly simple. You begin on a space station, which serves as your hub world. From there, you explore progressively harder derelict vessels, with each piece of data retrieved revealing more. Aside from the central data retrieval, there are numerous more conventional quests available from the station itself. Collecting X number of worm intestines, or delivering energy cells, just to name a few.

The more interesting quests are generally found on the derelicts themselves, be it aiding ravenous garbage disposal units or curing a robot’s schizophrenia. They don’t offer anything new mechanically; generally they’re the same type of fetch quest, or wandering between two NPCs. But the framing is done well enough to make them feel distinct.

Moving around itself is pretty tiring early on. Without any upgrades, your energy depletes fairly quickly. And energy is essential to everything you do. It’s needed to move and it’s needed to fight, both of which drain it rapidly. Should you run out, life support systems fail and you’ll find a quick death.

However, after the first few derelicts, you should have accrued enough credits to vastly increase your reserves and decrease the rate they vanish, so it’s not a lingering issue. Even without them, you can return to the station at any time without losing any progress, provided you can reach a landing zone.

These landing zones serve another essential purpose as well, as you can revive dead party members if you get there quick enough. And if you’re not prepared, that will happen quite frequently.

Enemy encounters are turn based combat, using a very rudimentary card system for attacks. It doesn’t do anything with it beyond having a hand and drawing from a deck of attacks, buffs and debuffs though. So, for those who enjoy card-based mechanics, there’s nothing to be found here. But it’s not at all intrusive if you don’t.

The attacks themselves are fairly basic, but the glossary of terms the game uses to explain simple things can get a little grating. You’ll learn eventually, but it’s a lot to remember.

Beyond the mechanics of combat itself, the enemy encounters are decently varied. The major factions of enemies like the pirates or the robots play largely similarly, but it’s the outliers like the wormlings or the cybernecrotic undead that offer the more unique fights.

The challenge level of these encounters is wildly inconsistent, though. You might dominate one faction and get obliterated by another, all at the same level. This is accentuated by the game’s environmental hazards, a feature expanded by the DLC.

Some environments, like the Energy Flux, allow both you and enemies to perform two actions a turn. For some enemies, this means they’re all dead before they can do anything. For others, it means you can’t do a damn thing. This ugly fucker for example can give your entire team a minus 80% chance to hit. For two turns. And can spawn other enemies or attack while doing it.

Half the time, this really works. It allows you to feel like the baddest bastard in the universe, then you barely survive an encounter, only to learn it was just a generic enemy and there are dozens more. That’s a satisfying level of challenge, and it’s always rewarding. But the rest of the time, it just feels unfair.

Moving Up in the Universe

At first glance, the vast majority of the game’s loot is pretty unimaginative. It gives minor percentile increases and makes no aesthetic change. But where the game’s loot system actually works is in the composition of your deck. You don’t pick cards like you would in Slay the Spire, your gear itself has cards associated with it and those comprise your deck.

Different weapons have different attacks and add different numbers of cards to your deck. There isn’t a staggering amount of variety to these attacks, but there’s a surprising amount of strategy in contrasting the need for good attacks with bloating your deck. And some of the more powerful items add both terrible and brilliant cards.

However, with one or two exceptions, none of these weapons are class exclusive. And even the ones that are don’t differ too much. The majority of class difference comes from the skill tree, rather than items.

The game’s currency doesn’t feel terribly impactful either. You get a lot of it, with not much to do with it. Putting it towards research is your best option, but after you’ve emptied a couple of derelicts, you’ll have enough to max it out. There are not many upgrades to begin with.

After that, it mostly goes on medical bills. And not much else. The game’s shop only sells worse versions of what you’ve already found, along with a few resources. It makes credits seem a bit pointless, with XP being the only real incentive to complete quests.

The levelling system is pretty generic too. It adds a few more interesting class exclusive cards, but it’s mostly stat upgrades. It does succeed at feeling impactful, though. There’s a very notable and satisfying power increase as your team grows in levels.

Deep Sky Derelicts uses an art style that’s definitely been done before. That much is obvious. But in this instance, it works perfectly to capture the dead, lifeless wrecks and the shambling things that inhabit them.

It uses a lot of greys and browns, but unlike the generic military shooters that adopt the same colour pallet, it works here. And it doesn’t shy away from colour with some of its more exotic creatures. Striking, venomous greens and electric blues.

The art style is timeless and fairly well implemented. But it does have a few inconsistencies. Most of the heroes look at home in the rusted wrecks, sporting clanking brown spacesuits. But the Tracker looks more at home in the high-tech station, standing out from the rest. A couple of the enemies, like the recently added Myrmexes, have the same issue. A minor gripe, as the game is otherwise beautifully bleak.

Not So Silent Screams

The game sports a fairly subdued soundtrack by sci-fi standards, but it actually serves to enhance the atmosphere of the groaning wreckage. Outside of that, characters only have audio when attacking, which is suitably grotesque when it needs to be and decently reserved otherwise.

It particularly excels in melee attacks, really adding weight to every strike. Although the sound effects on the DLC Miner tossing incendiary grenades around are also pretty meaty.

Roguelikes tend to excel at replayability. Between procedural generation and the chance at an entirely new style of play after every death, they keep you hooked a lot longer than most. Deep Sky Derelicts doesn’t. And the reason for that is very simple. Most runs feel more or less the same.

There are a few differences between the heroes in terms of playstyle, but certainly not enough to warrant multiple playthroughs to experience. And messing around with team compositions usually results in very similar set ups.

There’s no progression carried over between playthroughs either. In other similar dungeon crawlers like Enter the Gungeon you unlock more weapons, more characters and other things to diversify gameplay. But being a more faithful roguelike, Deep Sky Derelicts doesn’t include any of this stuff. And while the random nature of the derelicts does help, I encountered several of the same quests and the same characters across playthroughs only a few wrecks in.

There is some carry over of experience as you learn how to handle each enemy encounter better and how to best wield the heroes, but that only serves to make runs more alike as you develop optimal strategies.

It doesn’t detract from the fun of the game too much. I enjoyed it equally for most of my playthroughs, save the ones that ended in a premature surprise death. But I can’t see myself putting as much time into this as I did into The Binding of Isaac: Rebirth, which to date has gotten 315 hours out of me.

Despite a fair few niggling gripes with it, Deep Sky Derelicts is a damn fine game. As far as roguelikes go, it manages to be something new and different while still staying true to all the things that make the genre great. It’s stands out in an overcrowded genre on the ingenuity of its setting and a few unique mechanics.

It can be brutal at times, but compelling enough to get you through it. I played a lot more than I need to. It’s a solid example of a tried and tested genre. For their second game, and their first PC title, this is an excellent showing from Snowhound Games. I look forward to their next offering.

If you want to see more reviews like this, head on over to https://opencritic.com/and look for us there.

A stellar example of a unique rogue-like dungeon crawler that doesn’t betray its roots.