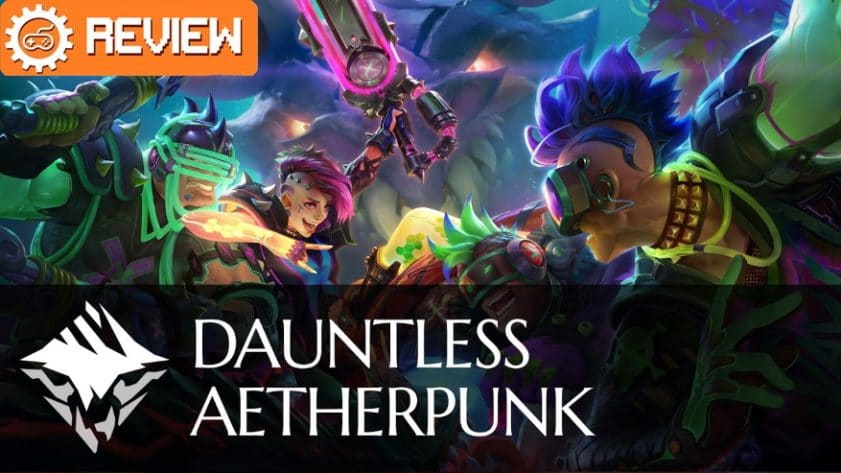 Setting My Banner Down in the Grass

Dauntless is a co-op fighting game very much like the Monster Hunter games but without that RPG feel. Dauntless is primarily a fighting game, and it shows. Despite the gorgeous Fortnite-esque aesthetic, and the really cool characters, Dauntless plays a bit laboriously for an action game.

I want to like it. The habitats are amazing and I am a sucker for collecting stuff, which is one thing Dauntless does well. Sparkly rocks? I’m grabbing them. Glowing mushrooms? Gimme. But there’s something clunky about Dauntless. Something that feels like using your grandparents’ phone with its giant buttons.

The Aetherpunk Hunt Pass came out on January 30th. The Hunt Pass functions like the Battle Passes found in many other games. You tier up, you get loot. Where Dauntless is different, though, is that you don’t get XP for everything you do in missions. You level up as a Slayer, but the only way to tier up your Hunt Pass is to collect Brazen Bombshells from Ramsgate, the hub world, or by completing various bounties.

The Brazen Bombshells appear around Ramsgate for you to collect daily. You get ten, and from what I can see, they’re in the same location for every player. Each one is worth 5 XP, so collecting them all every day will get you half a tier on your Hunt Pass. Yep, that’s right. The Hunt Pass tiers are all exactly 100 XP. Which is just as well, because it’s hard to get. I’ll go into more detail about the bounties later.

Dauntless is all about behemoths. They are much bigger than you, and they have a variety of skills and explosive talents from fire to earth to electricity. My favorites are the Frost Behemoths.

You’re deposited on a map with three teammates and one monster. There are goodies to collect to turn into potions back home, or for you to complete an easy bounty. There are glowing geysers to help you get around, which look suspiciously like Fortnite’s old geysers.

The actual combat is quite good once you figure it out. Using the weapons is fun and satisfying — I’m currently addicted to War Pikes. Without figuring out your power up, though, combat is dull. I felt like I was just repeatedly bashing the behemoth with my weapon.

The behemoths themselves are challenging, and there isn’t really an easy mark among them. However, for me, they’ve gone past challenging and are more annoying to fight. You get bunted out of the way constantly, and you have to keep running after the behemoth to have another go at them. I didn’t enjoy this at all and found the chase extremely irritating.

Bounties require you to defeat a certain number of behemoths with a particular weapon, or to collect a given amount of one item, or things like that. If you can get them done, though, they’re the only real way of bumping up your Hunt Pass.

I am a sucker for this season’s loot. The neon colors, the punky vibe… I’m all over it. Some of the art does go too far, though. It’s all in Fortnite’s candy-pop vein, which I admittedly went through a phase of really liking. But now the whole bubblegum gaming thing is grating on me. But if you’re into it, you will love Dauntless.

The combat graphics are fantastic. Bright, high-resolution gaming. Your power-ups are a vibrant glowing blue, and you get lovely bubbly damage numbers in white and yellow whenever you hit stuff. The behemoths are stunningly rendered with ferocious detail. They are bright, vivid, without feeling too overdone. They look scary, like something you wouldn’t want to meet in a dark alley. Bits come off when you smack them hard enough, and they have their own power-up effects. I feel like the menu graphics could be a lot better, but otherwise, everything looks good. Ramsgate is gorgeous, and so are its inhabitants.

The music gives you a heart-thumping adventure vibe and the sound effects are very well-done in Dauntless.

Obviously, Dauntless is co-op, so you need a mate or a random online buddy. It does have matchmaking, which usually works quite well. It has better match-finding than Overwatch, unless you select the Patrol mode. That tends to take a while. Also, there’s no endorsement system yet, but I didn’t have any problems with other players at all. One thing I liked about the community on Dauntless was that anything you collect doesn’t disappear; it’s available for everyone. Solves the snatching problem you get in games like Fortnite.

There is a revive system, which works quite well, but becomes irritating towards the end of a match. At first, you can revive yourself — you get a limited number of those — but eventually, you’ll have to wait for a teammate to revive you. At specific points in the match, the danger meter hits 100%, and you no longer get revives at all. If everybody dies, it’s game over.

Dauntless has a unique method of communicating with your team: flares. I love these, but could never remember to use them. They’re one of the customizable options you get like emotes. I currently have mine set to a banana. Follow the big, sparkly banana in the sky, team!

Dauntless is a colorful, if boring behemoth-fighting game. It’s worth a go, but needs a lot of work before it’ll hook players on a long-term basis.

Dauntless is developed by Phoenix Labs and published by Epic Games. It’s available on Nintendo Switch, PlayStation 4, Xbox One, Android, and Microsoft Windows.

Copyright secured by Digiprove © 2020
melaniejayneashford
Melanie Jayne Ashford is an old millenial from Wales, UK. She is mum to one mischievous tortoiseshell cat and one French Bulldog puppy. Her gaming passions include RPGs, MMORPGs, FPS and esports. She is also a huge fan of TRPGs. Her favourite character is Aloy.
Latest posts by melaniejayneashford (see all)
Post Views: 319