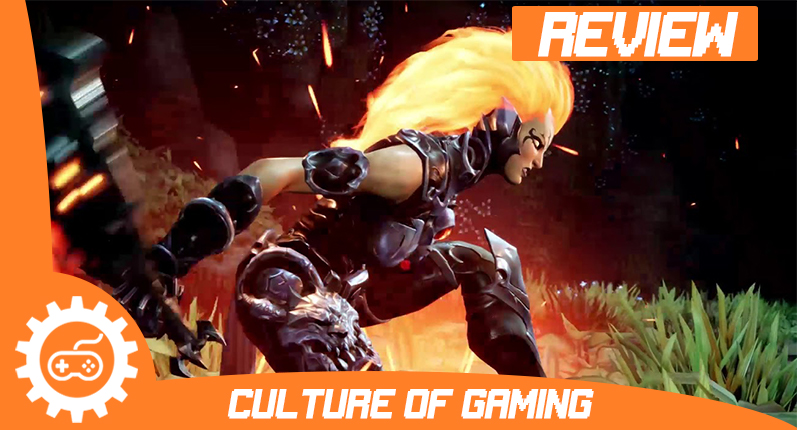 Darksiders has always been one of those properties that has had a niche yet passionate fanbase. Both the first and second game promised an epic four-game-long story with strategic gameplay, where fans would get to play as each of the Four Horsemen of the apocalypse caught in the middle of the struggle between Heaven and Hell. But after THQ filed for bankruptcy in 2013, all hope seemed lost for the franchise to see a conclusion. Enter: Darksiders 3.

From THQ Nordic, Darksiders 3 delivers what was promised to fans in spades. A fun hack and slash with all of the strategy of timed dodges and attacks, leveling up, and melodrama that we have all come to expect. But by sporting some frustrating game issues that seem like a relic from the past, is it the epic that we were promised or is it the apocalypse that we feared?

Surprisingly (or unsurprisingly if you are familiar with the franchise), you can boot up Darksiders 3 for the first time with barely any knowledge of the previous games and still have a great time. All three games take place at about the same time in the story. All of the games are played from the perspective of the different Horsemen of the Apocalypse.

For newcomers, all you really need to know is that you are Fury, the third member of the four Horsemen of the Apocalypse. Your brother, War has been accused of starting the apocalypse prematurely (the plot of the first game). Your brother, Death is trying to clear War’s name (the plot of the second game). And you have been tasked by the Charred Council (the ones imprisoning War) to capture and return the Seven Deadly Sins, personifications that have escaped imprisonment are wreaking havoc on a desolated Earth.

Fans of the franchise will love the continuation of this epic story. And people who are new to the franchise will not be so lost that they feel as though they are missing something. Remember: all three games take place pretty much at the exact same time. Fury doesn’t know or care what’s going on with War and Death.

How you feel about the characters and acting will change from person to person. Personally I found Fury rather dull as a character at first. As her name suggests, she is brash, impulsive and rather one-note. But as she confronts more Sins, she begins to grow in complexity. Yet, at the same time, it’s OK whether you like her or not. Not every character has to be the same. I found the reoccurring character from the previous two games, Vulgrim the demon merchant, much more annoying. But at the end of the day, with how annoyingly parasitic he is, it just makes me identify with Fury even more

Strange thing is though, I forgive it. Like I said before, we almost didn’t get this game. And as you’ll read on, you’ll see there are so many other things to appreciate about this game. Sure it might be obvious that I’m clearly not meant to climb a ladder on a wall, but each area is still clearly distinguished from each other.

As I hinted above and before I say anything else, let me just say that this game is really fun. In an age where every game has to be like a movie or experience, Darksiders 3 is unapologetic in just how much of a video game it is. It reminds me of games from over a decade ago, like God of War, Ninja Gaiden, and Devil May Cry. You go forward in the only directions you can, until you need to solve environmental puzzles to keep going. You hack and slash enemies until they spill out health and currency in the form of souls. But Darksiders turns these concepts on their heads for better or worse.

Starting with something positive, I love the utilization of the different types of weapons in this game. At the beginning of the game, I assumed that I would stick with Fury’s trusted whip and very rarely switch to another weapon. But as I upgraded my weapons, I noticed that the other weapons that I was upgrading were just as, if not more powerful than my main weapon. This encouraged me to experiment. And I developed a taste for what weapons I preferred to use more often. There is great customization for buffs that you can add to your weapons. This is something I can’t say for the actual path for your adventure, however.

Switching up the concept of just moving forward and solving environmental puzzles to reach the end of the game, Fury has a compass on her that allows her to find the Seven Deadly Sins. Because this is a video game, the compass really doesn’t do anything for the player without a map. The compass might tell you that your next opponent is to the north. But when the puzzle in front of you is temporarily facing east and the one after that is facing west, it really makes no difference what direction the compass is telling you. The game is rather linear, but it tries to make you think that it isn’t, with other paths that can open up with upgrades that you receive over the course of the game.

The most useful of your upgrades are different colored hollows. They add an element such as fire or lightning to Fury. This gives her abilities that she does not have otherwise. These include the ability to set webs on fire or fly up bursts of air from the ground using a hover ability. Very rarely will these side areas lead to anything more than item boosts known as shards or metal known as adamantine that you can use to upgrade your weapons. Without a map, it leaves your compass feeling less useful than it should.

I Need Time To Think. But Not That Much Time – Save Spots And Load Times

Along your path, you will encounter enemies that get more difficult the more powerful that you become. You must use what you know about every enemy and their attack patterns. You then dodge them and hit back until they die. The problem is that, at times, save spots can feel rather sparse, meaning that you will have to traverse the same long paths over and over.

This wouldn’t be so bad, except for the sheer amount of loading the game requires. You will often times be running from one location to the next, and your game will freeze for twenty seconds and load the next area. It feels rather intrusive. And it happens all the time. To make matters even worse, the loading that happens after you die, takes even longer. For how fun it is to use strategy in this game to take on even minor enemies, let alone the fantastic boss encounters, the length and amount of loading can be unforgivable.

Darksiders 3 is a blast from the past. It has fun strategic gameplay, lots of different instances of customization, and memorable boss battles. For better or worse, it comes from a different time period. The quality of fun that I had while playing this game is definitely worth an eight. The thing that makes it worse is the large amount of my time it wastes with its load screens. I wish this game could be an eight because I really think there is something here to be enjoyed. I really think if you give it a chance and show some patience, you will like Darksiders 3 a lot. The loading is what might turn you away. It almost did for me. I truly hope we get a Darksiders 4 so we can see the conclusion to this legendary series. Hopefully next time, at a faster pace.

THE GOOD
It’s back! It’s actually back!
Many weapon choices and you will actually use them!
Strategy imbued into traditional hack and slash formula
Really fun and challenging boss fights
Nostalgic gameplay

Darksiders 3 is a retrostyle hack and slash that changes up the gameplay just enough to not get dull. The strategy and challenge involved with the boss encounters can be both fun and frustrating. However, the constant and lengthy load times can kill the buzz of an otherwise terrific game.