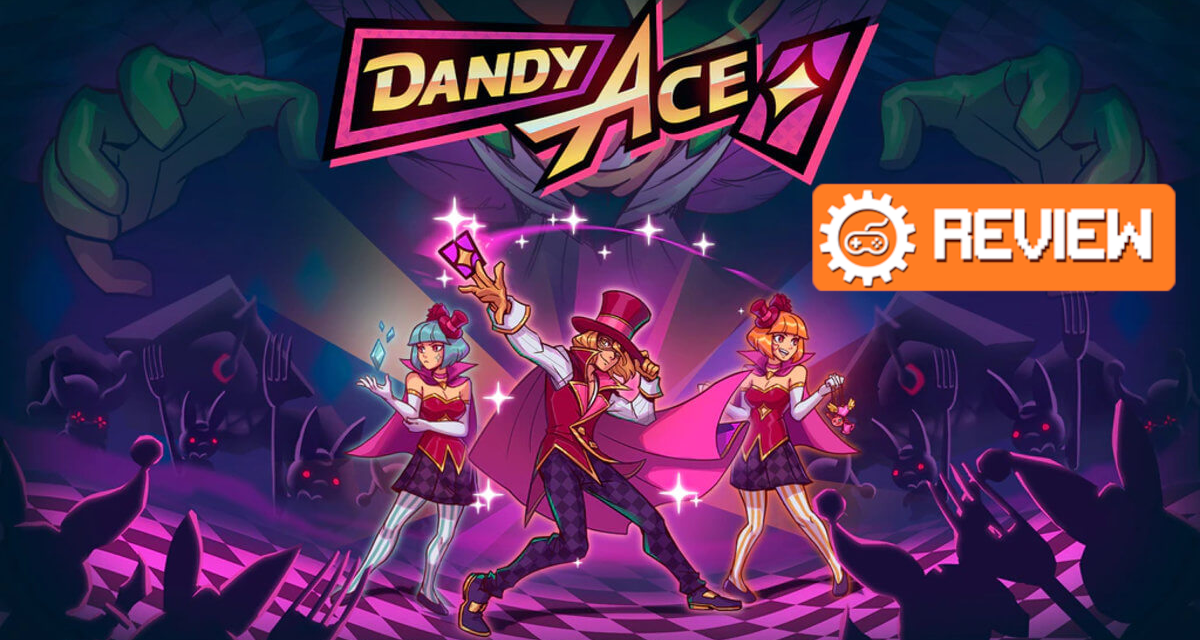 Dandy Ace is the greatest magician in the world.  And thanks to the help of his assistants, JennyJenny and JollyJolly, there is no magic trick that he can’t conquer.  Together, they face their biggest stunt yet, the ever-changing palace.  You may be wondering, who could have trapped this motley crew in this dream world?  Well, none other than the green-eyed illusionist, Lele, Dandy Ace’s rival (at least in Lele’s eyes).  Does Dandy Ace have what it takes to make it out? Let’s find out.

What Does it Take to Escape?

At its core, Dandy Ace is a rogue-lite action game with a 2D isometric layout.  Throughout each run, you will pick up cards from Dandy Ace’s magic deck for your build.  You will get cards to change up your dodge ability, and 3 different attacks.  One awesome feature with the cards you pick up is they host a primary ability, which is the active trait that you will see when you attack or dash, and a secondary ability.  When the secondary card is equipped, your primary ability gets a bonus effect, things like poison, explosions, or any other crazy idea the developers have come up with.

The variety in the cards you find is nothing short of amazing.  Each one feels natural in its use and fits perfectly into the setting.  Really, the only complaint that I can have is the balance.  To me, the ranged attacks feel much stronger than the melee ones.  I wouldn’t say it’s because of the damage output, but the fact that the range advantage you get with it is overwhelmingly strong compared to having to get up close and personal with the melee abilities.  Mad Mimic, the developers behind Dandy Ace, have noticed this problem and started to release balance patches to solve this problem.  Props to the devs for being so active when it comes to patching the game.

One aspect I enjoyed a lot is how certain items you craft will carry over to the next life if (more like when) you end up losing.  It is nice to know that not all progress is lost.

Who Fights Dandy Ace in The Ever-Changing Palace?

When it comes to the foes you face, there is an amazing list of enemies.  We have rabbits with forks, chandeliers, ghosts, axolotls and so much more.  The best part? Each one is unique and never feels like it shares or overlaps with other enemies in any way.

Each boss is amazing as well.  Personally, My favorite is Axolangelo.  Don’t get me wrong, the rest of the bosses are great, and offer a hard fight.  But the personality Mad Mimic gave him puts him right on top.

One thing to note, Dandy Ace does not have i-frames.  So make sure that if you are dodging or get hit, you do not let the enemies wreck you in one move.  This choice was a little controversial from what I have seen, but I do enjoy the extra challenge.

Why Yes, Dandy Ace Has a Story

For the story, it is as I mentioned at the beginning of this review.  Lele is looking to become the best magician in the world, and he has to get rid of Dandy Ace to do so.  And so, the ever-changing palace was the perfect place to trap the Ace.  When examining the story, it’s not deep, the only purpose of it is to set the stage for the game and to hold as a backdrop for how everything is connected.  And that is all it needs to do.

Never at any point does the story take away from the gameplay of Dandy Ace.  Something that I am thankful for.  There are games out there that I have played where they just push the story for no reason, or in parts where I would least expect it.  The only thing that occurs during the real meat and potatoes of this game, (the dungeon crawling) is the occasional one-liner from Lele.  Not only that, but all the lines in Dandy Ace are voice acted too!

The voice-acting portion I was not expecting for a game like this.  But to my surprise, every voice fits every character.  The tone, delivery, all of it is there with the cast, and I could not be happier with it.

Ah yes, the battleground for our encounters.  This arena is randomly generated every time you start a run.  And while the look and feel of the palace is great, I can’t help but feel it is a little too linear.  Each run I just go in the direction and end up finding the portal to the next area.  There are areas that you can access which does take you off of the main trail.  But, they are locked away and require you to find keys to access them.  Personally, I have never found a use for the keys, since they are not required to beat the game.

If the developers, Mad Mimic, take anything away from this review, I would hope it would be about making the palace more maze-like.  Never have I found myself questioning which way I should go, or wondering if I am on the right track.  And honestly, this is my only true complaint with this game.

All in all, Dandy Ace is a solid rogue-lite with a wonderful cast of characters.  Almost everything about this game has its place and feels natural.  The only thing that could be worked on is the Ever-Changing Palace’s generation process to make it more worthwhile to explore.  And if that is my only true complaint, then you know there is a lot to enjoy.

If you are looking for a fun Rogue-lite game with plenty of character built in, then Dandy Ace is the game for you.