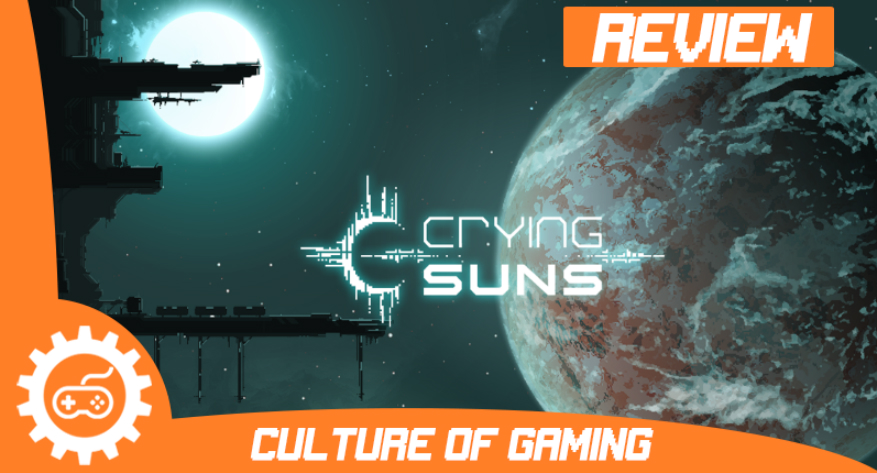 Crying Suns is the latest in a long and storied lineage of tactical space-age rogue-lites. But while other games of its ilk are mired in complexity, it embodies their best features, forgoing their worst. The same could be said of the game’s narrative and tone, which proudly borrow from some of sci-fi’s greatest.

With the empire that once dominated space withered and dying after the mysterious absence of the OMNI governing its vital functions, humanity is dying out. Their dependence on machinery left them incapable of fending for themselves and entire colonies succumb to the elements. The game’s narrative follows a clone, copied from a legendary admiral, awakened to find his empire absent. With supposedly the last functional OMNI in tow, the game follows his journey to unravel the mystery.

The clones serve to facilitate the game’s rogue-lite elements, while its tone and art style perfectly capture a derelict, dying universe. It’s an unoriginal premise, but one that’s utilised in combination with the game’s mechanics, rather than in-spite of them. This, paired with the exemplary universe-building that supports it, makes it one of the more compelling narrative rogue-lites around.

As with many sci-fi rogue-lites before it, Crying Suns is a game built around resource management. You must keep your ship intact for the entire duration of your journey, through whatever means necessary. While many games try to capture the complexity of such a task, Crying Suns keeps it mercifully simple.

The game ostensibly has only three resources to manage, alongside the condition of your ship and its components. The first, and easiest to acquire, is Neo-N, this game’s version of fuel. You use it to travel between points of interest, both within and between of star systems. Any movement requires fuel and while the game doesn’t allow you to strand yourself, depleting it has a cost. Refueling outside of an event requires time, time which allows the sector’s controllers to become aware of your presence. So, getting stranded can lead to some of the game’s nastier combat encounters.

The second, and slightly more complex, is the crew. The number of commandos you have is the only value to manage, but their use is limited. They’re confined to ground missions and the occasional encounter and are fairly cheap to replenish. The officers are far more important. Only available through successful encounters or victories, they enhance your ship’s capabilities in various ways.

Each gives a dramatic enhancement to an area of the ship they’re assigned to during space battles. There’s not much variation in these upgrades, but they’re always very impactful. They also lead commando teams on ground missions, with their skills determining the casualty rates and chances of success. These chances are communicated fairly well, and encourage a diversity of officers on staff.

The final and most ubiquitous of these values is scrap, the game’s central currency. With the empire withered, its currency is defunct, and fragments of OMNI tech are the only things with value. It’s so ubiquitous in its functions that it merits a section all to itself to try and encapsulate it.

Scrap’s most immediate purpose is to upgrade the ship itself. These upgrades are fairly straightforward, improving basic things like health, radar strength, or recovery time. They’re deceptively cheap, but instead of detracting from the difficulty of runs, they serves to enhance it. It encourages you to blow all your money maxing out systems as soon as you can, leaving you penniless.

That’s the only function it serves between locations, with most of its other uses confined to encounters or shops. During encounters, you might use scrap to bribe enemies or help innocents, either for a reward or to avoid consequences. In shops, it does basically everything else — repairing the ship and its damaged components, repairing squadrons, healing or hiring crew members, buying fuel, etc.

The game seems generous with how scrap it throws at you, until you realise the amount it’s needed for. So, while the game doesn’t have that much to balance resource-wise, it’s still a challenging task.

The Denizens of Crying Suns

The game’s central narrative is intriguing enough, but as with most in this mould, it’s overshadowed by its surroundings. The game is full of random encounters with the citizens and technologies of the universe, of varying quality. At worst, they’re resource pick-ups or combat encounters with decent material incentives. At best, they explore the misery of the universe abandoned by its central technologies and the existential dread of being cloned beyond death.

These flashes of brilliance largely come in the form of space encounters. These are visible as anomalies on the radar, although they don’t confirm whether the encounter will be beneficial or confrontational. You can use resources and officer skills to navigate around encounters you’d like to avoid, or get even more out of helpful ones. It gives you a little more reason to save or stockpile resources.

The ground encounters are generally a more standard affair where you watch a team explore the world’s surface from orbit. Generally, the chance indicators mean you know the results going in, only controlling if and when they retreat. They’re duller than the space events, but generally pay out better if you’ve an officer with the right skills.

A quintessential example of an easy to learn but hard to master skill, the space-combat composes the meat of Crying Suns’ gameplay. You use deployable squadrons to battle enemies across a grid spanning the space between the two commanding vessels. These ships support their respective fleets with their own weaponry and a litany of abilities provided by their officers.

It’s tried and tested system, enhanced by the respective abilities of the various squadrons. These can range from stealth to spawning indefinitely more copies of themselves, depending on how advanced they are. Any destroyed are eventually repaired and can be redeployed from the ship, providing it survives their absence. With all these elements drawn together, it makes for a combat system that’s surprisingly intense despite its simplicity.

The progression in Crying Suns is refreshingly tangible. Instead of minor stat increases, you can get new weapons, officers and squadrons that can be drastically more powerful than old ones. And since the upgrades are fairly cheap, they accumulate quickly, making for a real sense of progress.

The enemies do the same, naturally, but you always feel like you have more options against them. Access to new configurations of weapons and squadrons, as well as the capacity to change them right before each battle, means that every new piece of gear gained is a new way to gain an edge in certain situations rather than making old ones obsolete. And it’s necessary, as the different enemy factions have wildly different battle tactics.

As with most rogue-lites, there’s also progression between runs. There aren’t any upgrades as there’s no currency that translates, but you can unlock new and more powerful ships and officers by progressing through the game’s story. It’s small, but enough to encourage multiple runs and is enough for you to feel an advancement from one run to the next.

Despite the limitations of pixel art, this game excels at creating a bleak sci-fi atmosphere. Cold electric blues and dull greys dominate the game’s color palette. The vessels are jagged and erratic, contrasting the rigid, reliable shapes of the old imperial structures. The worlds are blasted and bleak. The only thing with any light are the stars themselves.

The soundtrack is fairly unremarkable by comparison, but I suspect by deliberate design. It pairs with the ambience nicely, striking dissonant and sombre tones in the background. It’s difficult to do sci-fi settings with pixel art, but they do it well.

The only real disappointing element are the characters themselves. Even the humans are indistinguishable, disjointed, and odd. The only ones that stand out are the Admiral and the OMNI, with everyone else being interchangeable faces. It makes it hard to become attached to any particular character throughout a run, or relate to those in encounters.

This game is definitely one that’ll take more than one run to reach its narrative conclusion. It’ll kill you at some point, just to prove it can. But it does merit runs beyond that, even if just to try out the new ships and configurations. It also has variable difficulty settings, which govern the abundance of resources and the challenge of combat.

I can’t imagine it extracting the same number of hours as a more traditional roguelike like The Binding of Isaac, or even similar games like Everspace, but it’s a safe bet that you’ll get your money’s worth out of it time-wise.

It’s a very solid game that does everything it’s trying to do very well. It manages to weave a narrative seamlessly into rogue-lite gameplay and maintain the standard mechanical progression alongside it. Space rogue-lites are a genre I’ve been desperate to love for a long time, but between FTL and Space Traders: Frontiers I just couldn’t. This one is the exception to that rule. It takes the same formula and makes it far more palatable. It’s well worth playing.

Enjoy this article? Find more reviews from Culture of Gaming here. Or simply follow our Twitter to see when any new article goes live.