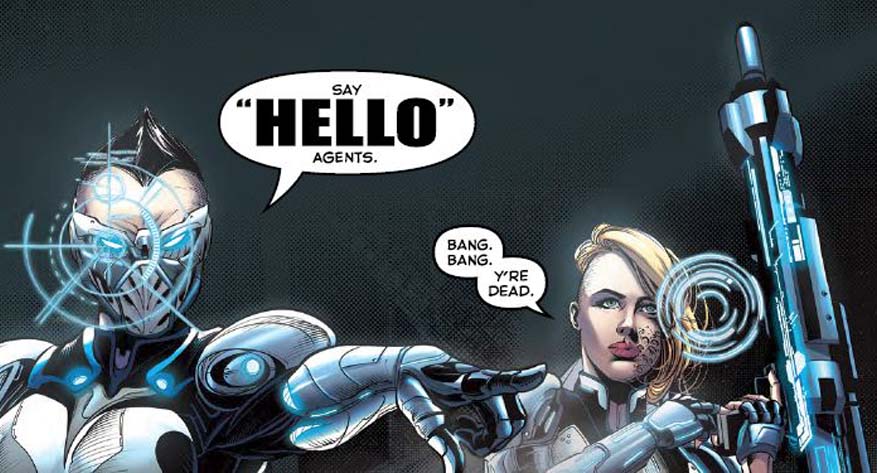 Pictures can speak a thousand words – especially in comics – and that is exactly why Dynamite’s new Crackdown series fails to impart the feeling and energy that it should.

As simplistic, brief and lean as it is, the story by Jonathan Goff is good enough. It is the dull colouring by Natalia Marques and the misdirected art by Ricardo Jaime that makes this comic a huge letdown to Goff and its readers.

Crackdown #1 takes place before the blackout attacks in the game Crackdown 3. An Agency team headed by Rebecca Rollins (Alias: Roll), rolls out to bludgeon, bash and blast a local gang of baddies.
Besides the short and lazy bios, we don’t learn much about the team that she commands. All that we get are the standard action hero archetypes: one is the muscle, one is a sniper, one is a demolitions expert, etc. Anybody who has watched Mission Impossible, The A-Team, The Expendables has seen this all before…but there’s more wrong with this comic than its predictability.

The characters have no personality and no background – despite plenty of time to delve into their motives and history. The entire plot found in the first issue is simple: the team breaks into a warehouse to face off against a gang. That is the entire plot of the first issue. The rest of the pages are filled with roughhouse narration from Rollins that is effective in setting the tone and providing background to anyone who is not familiar with the Crackdown series or its universe.

The most disappointing thing of all is that Jonathan Goff’s hard work is ruined by Natalia Marques and Ricardo Jaime. Jaime’s usually expressive and bold artwork is muted here. Everything seems stiff, rushed, and the action is constrained because there are far too many small panels on each page.

Marques’ choice of bland, subdued shades and colours makes the characters look bland, and nothing pops out during the action. Each page is just a swampy hodgepodge of boring browns, greys and blues. Nothing jumps off the page. Nothing stands out. It is not the colour palette of an action comic.

The Crackdown universe could be the perfect setting for a comic book, movie or television series. It has a simple but strong premise, and an interesting cast of villains and heroes. However, Crackdown #1 is far too mild and dull to capture the imagination and attention of any action or Crackdown fan.

Nothing stands out about what should be an in-your-face, intense action story.