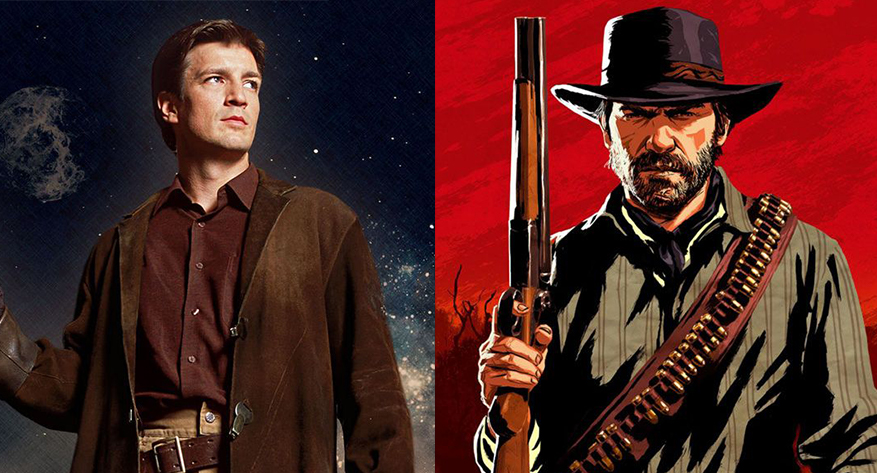 I can only imagine the director’s pitch for 2002’s Firefly: “So, do you know how Star Wars is a kind of like a space western? What if we made an actual space western?” And an awesome show was born. That might sound familiar to the more recent Guardians of The Galaxy, but where Firefly sets itself apart is its unique style. There are elements of Western cinema spread across Firefly‘s high-tech galaxy, from the classic folk theme song “The Ballad of Serenity”, to the planet-bound shoot-outs and bar fights. This contrast between genres is something not many sci-fi shows have tried before or since, and part of the reason Firefly has such a massive cult following.

Now, I work for a gaming site, so I tend to compare things to video games (perhaps more often than I should). So, as I watched Firefly for the first time, I mentally reached for some close gaming comparisons. You might think that with as heavily science-fiction Firefly is, a series like Mass Effect or Destiny might be the best comparison. But after mulling it over, I believe that the best video game translation for Firefly’s tone and cast is Rockstar’s Red Dead Redemption 2.

A few of the crew members of the Serenity: (Left to right) Zoë Washburne, Jayne Cobb, and Malcolm Reynolds

Like Firefly, Red Dead 2 is a story about very, very flawed characters. The Van Der Linde gang robs, deceives, kills, and destroys – anything for their next source of income. As with Serenity’s crew, the Van Der Linde gang is a tight-knit bunch. They each have their roles in the camp – Pearson cooks, Strauss does the bookkeeping, and Dutch leads the whole bunch. On the ship Serenity, there’s a similar distribution of work – Kaylee is the mechanic, Simon is the doctor, and Captain Reynolds leads the crew. Through this specialized work structure, both rag-tag groups move as a unit, plundering and pillaging with purpose.

Malcolm Reynolds, the moment his side loses the Unification War

The crew aboard Serenity has a grudge, one they’ve all inherited by degrees from their captain. Captain Malcolm Reynolds was a formerly a sergeant for the losing side of the Unification War, a struggle between the rising Alliance government and the less-organized Independent Planets. You could think of it as a galactic version of the Civil War, and similarly, the government-mandated army won. Reynolds has a grudge against anything Alliance-related, although he’s willing to put that aside if it means making a quick buck.

In Red Dead 2, the head honcho Dutch Van Der Linde also has a chip on his shoulder. It’s 1899 and the “civilized folk” from the east are gradually making their way west. More and more lawmen are coming to the western states, and Dutch sees this migration as a threat to their way of life, an impediment on their presumed freedom. He resents the east, and sees it as a threat to the dying ways of the wild west. This is Dutch’s driving motivation; he won’t let the west die without a fight, and boy does he fight.

The grudges of these two leaders affect the trajectory of their crews, for better or worse. Malcolm’s resentment for the Alliance leads him to accept a risky train heist (a scene straight out of a Western), one that nearly lands him and his shipmates in jail. Dutch’s intolerance of the east is the motivator for nearly every heist his gang pulls. This is especially evident when he and protagonist Arthur Morgan ambush a dozen or so US Army soldiers, and almost lose their lives for it.

These two leaders differ in one key area: standards. Captain Reynolds may be a thief, but there are certain lines that he refuses to cross. When Simon the doctor first joins the crew, he asks the captain, “How do I know you won’t kill me in my sleep?” Reynolds responds, “If I ever kill you, you’ll be awake, you’ll be facing me, and you’ll be armed.” Remember that train heist from earlier? Reynolds wasn’t told what he was stealing from the train, but when he realized he was robbing medical supplies from a dying village, he promptly returned the cargo. He told the village sheriff that returning the stolen medicine wasn’t a choice, but an obligation.

Dutch Van der Linde hides behind the guise of his moral standards, even completely rejecting those standards by the end of the game. He rants about “family” and never leaving his gang members behind, but does exactly that when he leaves both Arthur Morgan and John Marston behind to die at one point or another. He rejects revenge, saying that it’s “a luxury we can’t afford.” Yet Dutch brutally drowns crime lord Angelo Bronte for kidnapping John’s son, Jack. Dutch constantly undermines his own values, degrades his leadership, and rejects his gang members. It’s Dutch’s failure as a leader that causes the gang to fall apart catastrophically. Compared to Captain Reynolds, Dutch ultimately fails as a leader.

If you’ve never seen Firefly, or maybe it’s just been a while, I encourage you to watch it, keeping Red Dead Redemption 2 in the back of your mind. Comparing the sci-fi series to a Western video game might give you a different perspective on the series. Who knows, maybe you’ll appreciate it even more! I certainly did.

For more on Red Dead Redemption 2 and everything else video games, stay tuned to Culture of Gaming.