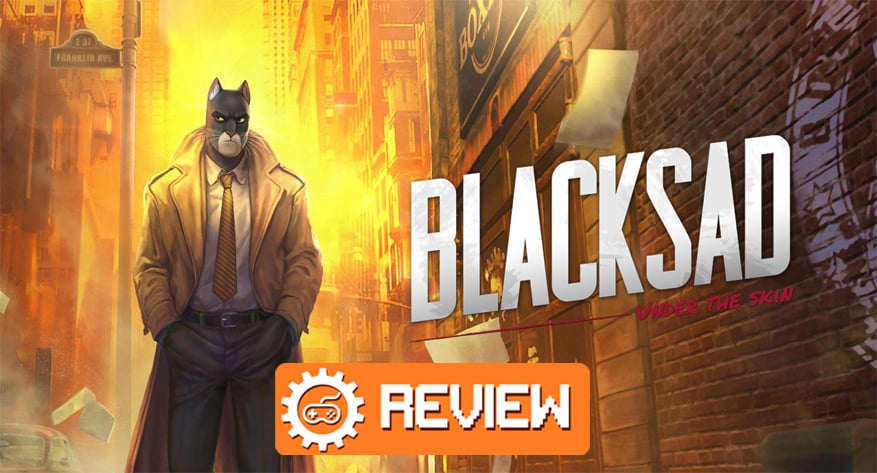 If you’ve been following my reviews here on Culture Of Gaming, you might have noticed that I have reviewed a couple of point & click games. From Irony Curtain to Mosiac, most of these have impressed me or at least were enjoyable. The great Spanish-based team at Pendulo Studios were kind enough to allow to review their latest point & click adventure game, Blacksad: Under The Skin. Blacksad is an adaptation of the Eisner-winning Spanish comic series Blacksad by Juan Díaz Canales and Juanjo Guarnido, with Telltale Games-inspired gameplay. But will Blacksad be as unique as Mosiac or will it just be your run-of-the-mill game? Let’s find out!

Blacksad: Under the Skin is set in New York City during the 1950s. Its story begins when the protagonist John Blacksad is approached by Sonia Dunn, daughter of a boxing club owner who has died suspiciously. She asks Blacksad to investigate the situation and locate the club’s star fighter, who has been missing since her father’s death. The game has a strong film-noir vibe similar to what you’d find in games like The Wolf Among Us & L.A. Noire.

The dark atmosphere suits the tone and theme of the game, since it’s a brutal 1950s murder mystery. The twist is that all the characters are anthropomorphic animals — for example, Blacksad is a black cat. For me, the game’s take on a gritty, animal-filled New York City is interesting. The murder mystery has many twists and turns that kept me invested in the story as well. The only flaw I found was that some of the voice performances are a bit off or awkward.

As I usually say when I review a point & click style game, the gameplay is nothing special. It’s a bit like Telltale’s The Wolf Among Us as a detective game where the main goal is to piece the mystery together by finding clues and talking to (or interrogating) suspects. The first thing I have to say is that the game is way too simple for a puzzle/mystery game, especially one targetted towards adults. I found it very easy to piece the clues together and know where to go at all times.

This could just be me, but I have a feeling other players would find this easier than expected. For example, in the “deduction system”, you take the clues you find and try to match them to make a coherent conclusion. The problem is that the game doesn’t punish you at all for getting a match wrong. So you are free to brute force until you find the right answer. All the other gameplay mechanics such as multiple choices and the cat’s vision don’t bring anything new, but on the plus side, at least the game actually has consequences for your choices and you could have a different outcome on a second playthrough.

This right here is probably the make it or break for most of you reading here. I’m just going to be direct about it: the game is extremely poorly optimized. Picture this: I have a 1080 Ti & Ryzen 5 3600 and running at Ultra settings (which were the default settings for me). But somehow, the game manages to stutter numerous times. In addition, the textures struggle to load properly, causing a pop in, and characters get out of sync, among many more problems. I also tried running at different graphic settings, but to no avail — I kept getting the same results. Which is strange, since the game recommends having a 1080 Ti in the Steam details.

This is really unfortunate, since the game actually has great art direction with its characters and environment. I do think the game could have a more refined art style to make it more memorable like what The Wolf Among Us, though. The soundtrack and sound effects are outstanding as well, with a fitting jazz soundtrack to accompany the game. However once again, this is affected by the dreadful programming of the game. There were audio issues such as bad audio mixing and other audio glitches.

In the end, I really enjoyed Blacksad: Under The Skin with its overarching narrative, likeable and memorable characters, and enjoyable soundtrack. However, the biggest problem I have with the same is terrible optimization. The constant lag stutter and annoying glitches pulled me out of the game and the rare game crashes affected my enjoyment. If the bugs were fixed and the voice acting improved, this game could have been really something, and I hope these aren’t issues on the console versions, at least.

The performance issues are really unfortunate, as otherwise I might have scored this game an 8.5 or 9/10. But for now, I have to look at the game in its current state. I hope Pendulo Studios iron these issues out in the future.

For more reviews and opinions on Blacksad: Under The Skin, check out Open Critic here.