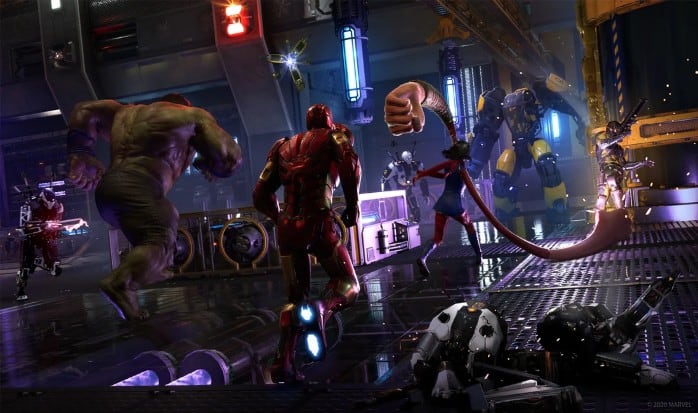 With Avengers is less than a month out and August serving as a time to Beta test, all eyes are turning to the next game from Marvel and Crystal Dynamics. While many are looking forward to playing as their favorite heroes like Ironman, Thor, or Hulk (just to name a few), many are wondering who else will be playable. We do know Hawkeye will be the first hero to join the cast post-launch while Ant-Man is also on standby. There is also Spider-Man, who will be exclusive to the PlayStation version early 2021 too.

With us knowing about eight or nine characters, it does leave us to wonder who else we may see join the cast post-launch. Well, if a data mine from the recent beta were to be believed, we might know three more names to add to that last.

Disclaimer: Please take the following information with a grain of salt. There is no official confirmation on whether we will see these characters in the final product.

Whenever we have a beta for a game, there will always be those special group of folk what will dive into the game’s files and see if there is anything special to dig up. Over on Reddit, we saw one such example where references were found for characters via “Hero Cards” and Emotes. We did see several of them that do have references to current characters, including Captain America who (surprise surprise), he might not be dead after all.

Within the files, there are three names referring to characters not in the game yet. These are Kate Bishop, She-Hulk and War Machine. An interesting set of choices, but ones that heave some wondering if they’re simply copies.

A Private Eye, A Lawyer, and A Colonel walk into a bar…

A a quick rundown:

After a traumatizing attack in Central Park, Kate Bishop would learn how to fight back and protect herself. It was then by through a chance encounter that through the Young Avengers that she would eventually join with them and meet and become the apprentice to the other Hawkeye, Clint Barton. While she does take up the name herself, she too is an expert marksman with the bow and excels in hand-to-Hand Combat.

She-Hulk (Jennifer Walters) is a Lawyer who underwent her own Gamma-powered transformation thanks to her cousin, Bruce Banner. After getting a blood transfusion, she did gain all the powers of the Hulk through super strength and agility while still maintaining her mentality (and according to Marvel, “High-Power Lawyer” counts as a power/ability).

Finally, we have War Machine. Former Colonel and military veteran James Rhodes (Rhodey) is a personal pilot and good friend to Tony Stark. When Tony fell into hard times (To alcohol! the cause of, and solution to all of life’s problems!), he took on the mantle of Ironman. When Tony overcame his addictions, Rhodey got his own Ironman suit that was more geared towards warfare. Complete with a minigun and a full arsenal at his disposal.

So if we were to be a touch blunt with comparisons, Kate Bishop is “Lady Hawkeye,” She-Hulk is self-explanatory, and War Machine is a variant of the Ironman suits. Not to jump to assumptions, but that isn’t stopping others from considering how these three could be either “alternative skins” or even alternative characters based on the current cast. Of course, at the time of launch, Hawkeye will not be in the base game, but we are talking characters who do share quite a bit of similarity to their in-game counterparts.

But how far will this go exactly? After all, to say that She-Hulk is exactly like Hulk would kind of insult her character, she can still speak rather coherently (and doesn’t really refer to herself as She-Hulk all the time). In fact, if we were to say how she could fight, it’s possible she could be a mix of both Hulk and Black Widow. It isn’t like she uses brute force all the time like her cousin.

We can say the same for War Machine. Yes, it is another Ironman suit, but while Tony’s suit tends to utilize Tony’s abilities and intelligence to its fullest, Rhodey’s is simplified (in comparison) while allowing him to still take care of whatever that needs taking care of with a bit of AI assistance. Plus, it’s fair to say that there are probably more bullets and rockets in War Machine’s arsenal in comparison to Ironman’s repulsor blasts.

In a way, we could draw comparisons to Smash Ultimate’s Echo Fighters, but it’s likely going to be deeper than we first think.

What will we see?

Will these three be in Avengers? Will they be near copies of their originals? Or will they be able to stand on their own? Either way, It’s fair to assume that we may see a nice range of heroes after the launch of Avengers, but it’s hard to say how deep that will go. With the Beta still ongoing throughout August, be sure to follow us here at Culture of Gaming for more news on Avengers and other things in the gaming world.

Also on one final side note: I probably should note I don’t have much of comic book knowledge than I’d like to admit, so if I got any parts of my explanation wrong, apologies in advance. Take care, stay safe out there and Square needs to update their Avengers site since it still reflects the May 15th release date.