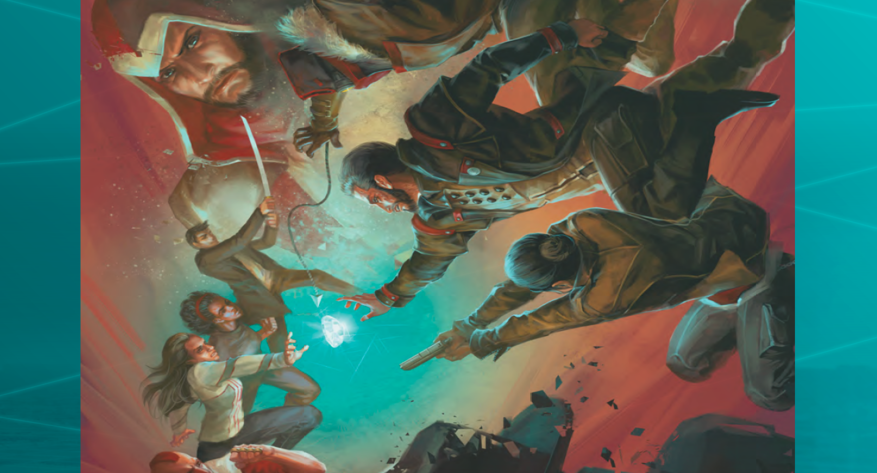 Assassin’s Creed: Uprising’s second volume continues the adventure of Charlotte de la Cruz and her Assassin cell. They are on the trail to find the Koh-I-Noor, a mystical and powerful Piece of Eden relic. After the events of Common Ground, Charlotte and her crew join forces with Otso Berg. Berg is a grand master of the Templar Order and the newly appointed Black Cross. A Black Cross is a member of the Templar Order that investigates internal corruption within the organization. Charlotte and Otso both realize that there is a third faction operating within the Assassin’s Brotherhood and Abstergo’s Templar Order.

The Instruments of Will, the secret third faction, is being guided by an Isu Supremacist known as Juno. Several Assassin’s Creed games revealed that the Pieces of Eden are artifacts left behind by a powerful and ancient precursor race known as the Isu. Charlotte and Otso both have the means to delve deep into history during the Spanish Civil War and experience the events unfolded from two different viewpoints. Charlotte delves into the mind of her ancestor, Ignacio Cordona, who is a freedom fighter trying to quell civil unrest in Spain, while Otso obtains a DNA profile of Albert Bolden who, at the same time, was the former Black Cross.

This volume is, by leaps and bounds, better paced and significantly more interesting than Common Ground. The story unfolds between present day events and the events taking place in 1930s Spain. The search for the Koh-I-Noor, a mystical gem created by the Isu, spanned centuries but few people knew about its power. Searching for the gem becomes a race between The Assassins/Templars vs Juno’s acolytes. The differences between the Assassins and Templars brings a fun and dangerous dynamic when working together towards a common goal. The main theme both for Charlotte and Ignacio is learning to trust and work with their sworn enemies in the form of Otso and Albert.

It becomes clear that there is a bigger enemy at play that may have a deeper grasp in both organizations than either character thought. Assassin’s Creed: Uprising does a good job of creating a good cast of characters but Inflection Point forgoes character progression in favor of storytelling. Common Ground, on the other hand, relied heavily on establishing character motives but never fully delved into the overarching plot. This volume is a welcome change considering that several characters introduced in Volume One brings almost nothing to the table other than moving the story along. This tale is mostly about Charlotte and Otso as they both uncover the dark secret within each other’s respective organizations.

The action sequences mostly take place in Spain but are easier to follow than the previous arc. Common Ground’s action panels were hard to follow and felt out of place when including high tech weaponry. Inflection Point’s action is grounded, creating a sense of duty that both Ignacio and Albert portray. This arc is a great middle ground that helps flesh out the story that the previous volume excluded while also setting up the final confrontation.

The artwork and coloring in Inflection Point are great. The use of muted colors for sequences that take place in the past is a nice added touch. Reading the story becomes fun when the reader now knows what’s at stake and how it ties together in the present. Common Ground felt like a cyberpunk story with light elements of the Assassins Creed franchise. This volume feels better attuned to the themes and stories that Assassin Creed fans know and love.

You can pick up this volume right here!

CultureOfGaming.com is your source for great reviews and editorials!