Are We Getting Dark Powers In Destiny? 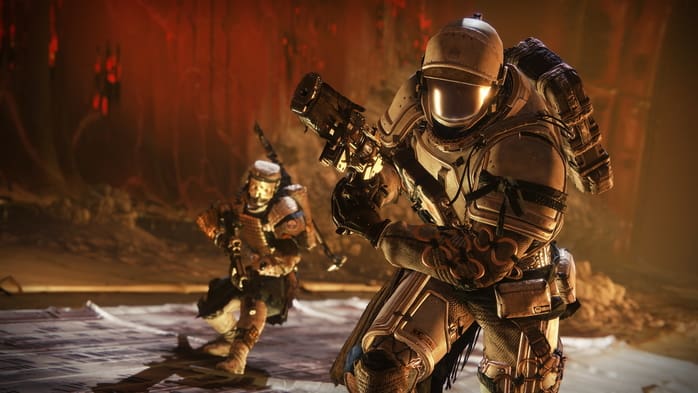 I’m late to the party when it comes to playing Destiny’s current expansion of Shadowkeep. Steam had a recent sale on the expansion and I decided to take the plunge back in and get back into the swing of things. Lots of new changes have revitalized several aspects of Destiny, both good and bad.

There are several new exotics to play with, as well as  several activities and rewards to chase more than ever for a player who took a year off. I’m loving some of these new activities, and while repetitive, they are still engaging and allowing me to do more rather than having to find a pub for a raid. Of course, if you visit Destiny’s Reddit page its a different picture but let’s be honest, that’s nothing new.

As I catch up on exotic quests and other story beats such as the Drifter’s “allegiance” quest and reading up on current lore events such as the Almighty, a giant Cabal ship, possibly crashing down on the tower. I can’t help but wonder that if for the next expansion we will start playing with the idea of using the Darkness.

The Story So Far…

Destiny’s story isn’t the most comprehensible when you consider that they retcon their own lore here and there. The overall story is still one of a group of heroes bestowed with the power of the Light, have to fight back evil threats while also preparing for the upcoming Darkness. Honestly, it’s almost the exact same storyline that Final Fantasy and World of Warcraft have used before except using space marines.

If you want a quick recap, check out this comprehensive video from The Leaderboard on Youtube:

Now with Shadowkeep coming to a close with Season of Worthy at its end. It’s clear that after doing several Rasputin missions that the Darkness is within range of the Guardians and that the culmination of teases will start to come to fruition. Here is all the evidence thus far that I’ve managed to put together and the slight chance that Bungie might allow Guardians to use their own Darkness as a gameplay change.

Mara Sov and her brother Uldren are no strangers to what Darkness entails as their race and several story beats in The Taken King and Forsaken expansions. The Awoken are humans who tried to avoid the cataclysmic event by sending a colony ship out of the solar system. However, something happened to the initial colony shipped that changed their form forever into a different type of being.

Mara Sov is particularly aware of the Awoken’s struggles against the Darkness as they’ve combated both the Hive and the Taken both on the Reef and The Dreaming City. the Taken Ahamkara Riven placed a curse of the city that locks the world in a perpetual curse and time loops the curse.

Mara Sov knows that the Darkness is coming and has hinted at them before the events of Shadowkeep. Uldren became corrupted and tricked by Riven which resulted in the death of Cayde-6. Uldren is killed by the Guardian only to be revived as a guardian himself later on.

The Awoken are getting ready for a fight with the Darkness and doing everything they can to prepare for their arrival. It is possible that they might use Taken power in some form to be used against the Darkness when considering that Uldren may play a role as a revived Awoken.

The Drifter/Emissary of the Nine

The Drifter is a mysterious figure first introduced in Destiny 2’s initial launch. During the Season of the Drifter, it became known that the Drifter is preparing guardian players to fight an impending doom by having them participate in Gambit matches.

The Drifter is a character who doesn’t trust anyone and does not believe that the light is a good thing for the Guardians. He mentions his distaste for the Iron Lords in the past and believes that a Second Collapse is coming. There are several times when he mentions that a guardian’s power won’t be enough and that players will need to “get down and dirty.”

His conversation with the Emissary of the Nine hints at a possibility that this upcoming Darkness can only be defeated using a different type of power. This makes me believe that the game will give Guardians their own version of Dark power. Possibly, a Dark Infused version of their Solar, Void, or Arc energy.

As players finish the story of Shadowkeep and the lore behind the Garden of Salvation raids ends. We know the Darkness is coming and it is going to be the next major event that will happen to Destiny. The Darkness can also employ figures of the past as Nightmares, which are the main enemies of Shadowkeep. Eris Morn predicted that both the Hive and Taken kept challenging the Guardians in constant combat but ultimately defeating both the Taken King and big names of the Hive brood.

The Darkness’ Nightmare apparations are only a taste of what the Darkness can do. They’re able to bring enemies back from the dead. It’s similar power to the Guardians and their resurrection ability using the Travelers’ light. The end of the raid for Shadowkeep confirms that the Vex are also playing their part since the first Destiny game to summon the Darkness back into the solar system.

If you don’t mind spoilers, watch this video of the lore behind the raid. They mention a guardian team from the past who have used powers and weapons “granted” by the Darkness before.

After reading and watching more lore videos behind the latest developments happening in Destiny while also finishing up side quests during my gameplay sessions. It almost but confirmed that players are going to have to use something new to combat this Darkness. My bet is that we’re going to have to follow the Drifter’s lead on this one and fight fire with fire.

What do you think? Do you think Destiny’s next expansion will let us use Dark powers? Let us know in the comment below! Check out my review One Step From Eden on Nintendo Switch or The Best and Worst of Dragon Ball Super! For more great interviews, reviews, editorials, and news stay tuned to CultureOfGaming.com or check us out on OpenCritic.com!