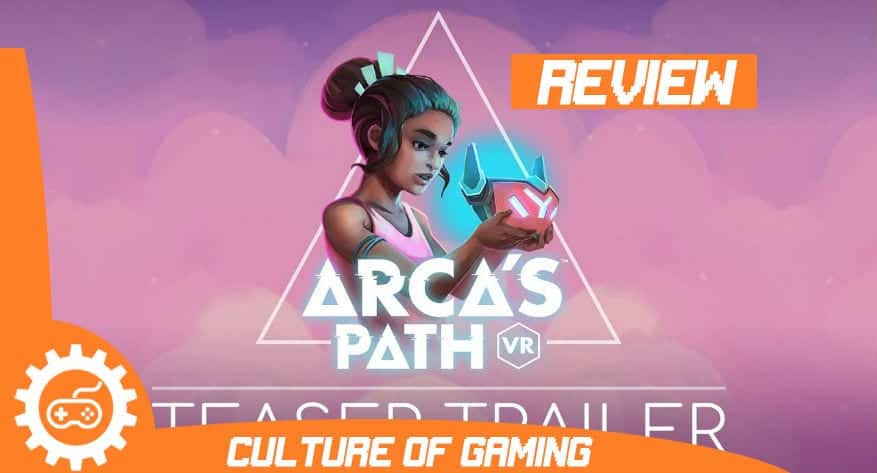 For a game as beautifully artistic as Arca’s Path, it’s a bit ironic that the vocals of Fred Durst from the Limp Bizkit song Rollin’ were stuck in my head. I solely lay the blame on the Undertaker’s biker phase back in the WWF — now WWE — “Attitude Era”. Luckily, developer Dream Reality Interactive’s game is a much better experience than having a garbage rap-rock song stuck in your head for days.

In Arca’s Path, you find yourself downtrodden, living among heaps of waste. One day a disposal vehicle drops a VR headset that changes the course of your life forever.  Once our hero places the visor over their eye’s, they’re brought into the dream-like world of Arca.

The intro to Arca’s Path is short and sweet. It takes almost no time at all to get into the meat of the game. Unfortunately, that meat is more like cube steak than a filet mignon.

Most of the controls in the game are motion based. The few that require button presses are just used to pause the game or go into ‘View Mode’. I’ll get to that part later.

In Arca’s Path, you must roll a ball — it’s actually an icosahedron, but we’ll stick with ball — through a series of 25 progressively difficult mazes. The first level has plenty of guard rails to protect you from the abyss. However, those rails are quickly lifted, and more difficult obstacles are placed in your way.

The ball is controlled with the unintuitive movement of your head. As you tilt, bob, and weave, a cursor darts across the screen. The ball you’re moving through the maze of Arca follows said cursor surprisingly closely. However, this can cause many issues when you’re trying to quickly make a stop before going over an edge. Play sessions are usually ended by the soreness of my neck rather than feeling a sense of accomplishment. Admittedly, I can be a bit overly cautious, but the game should at least have a warning telling players to be mindful of their necks. Fortunately, the game isn’t long enough to become tiring or repetitive.

All in all, the gameplay is okay at best. The level design is simplistic but good enough to require thought.

It’s Just a Matter of Time

Each story level in Arca’s Path has a set number of collectible crystals. They’re mostly hidden in plain sight. The sole function of these crystals is to unlock ‘Time Trials’. Each main story level has a matching Time Trials version.

As the name suggests, Time Trials are a race against the clock to reach the finish line. There’s not much to this mode. Each level is a carbon copy of its story counterpart, minus crystals. This mode adds nothing to the game and is just an excuse to make you collect the otherwise useless crystals. If you’re truly a junkie for speedrunning, then pull up the stopwatch on your phone and play the story levels. Since you don’t need your hands to control the ball, you can use them to start and stop your stopwatch.

Even though going for the fastest time can be a fun challenge, it’s not the way this game is meant to be played. Arca’s Path is all about the art. Rushing through each level does a disservice to the beauty of the stages and the intricacies of the level design.

A Sight to Behold

Despite the lacklustre gameplay in Arca’s Path, the graphics are nothing short of a work of art.

The View Mode in this game lets you get a closer look at that art. When you pause the game, you can go into this mode. Once you go into View Mode you can view the stage from the spot you’re currently at. This is useful for planning out your movements, but it also lets you walk around the stage and get up close and personal. The art isn’t super high poly or insanely detailed, but it fits wonderfully into the world. The look they establish early on is distinct and they commit to it throughout.

The cutscenes are like nothing I’ve seen in VR. Each scene plays out a section of what is essentially a VR comic book. Each frame pulls you deeper into the world as the story materializes around you. It’s certainly not the first game to go with a comic book art style, but the execution is incredible. Even though the scenes consist of mostly still images with slight movement, the addition of VR takes it to the next level. Instead of opting for highly detailed visuals, surrounding the player in the story adds a new level of immersion. The ability to make you feel like you’re in the middle of the game world is astounding.

Despite a lack of dialogue, Arca’s Path tells an intriguing story through art. This style of storytelling is becoming a more common occurrence in gaming. The story is a complete success in that respect. However, some of the details can get muddled at times. In the end, the interpretation of the story and the experience you get out of the game is more important.

I love being surrounded by the story of Arca’s Path. It demonstrates a beautiful, new way to create immersion in gaming. However, the gameplay still makes this game a pain to experience. It almost feels like something you would find in a mobile game.

I would likely find this game more entertaining if it was on my phone. The gameplay in Arca’s Path just doesn’t feel right in VR. I would much rather tilt my phone than snap my neck around to play this game. Even touchscreen integration could work by moving the cursor with your finger instead of your head. Also, the incredibly short length of the game it something that feels more like a bite-sized experience. This game lends itself perfectly to the time-killing pickup and play mentality that exists in the world of mobile gaming.

Despite lacklustre gameplay, Arca’s Path is a wonderful game. It can be a relaxing title if you take your time. However, it doesn’t take full advantage of VR. This game has its moments, but ultimately falls short of the mark thanks to controls that don’t coincide with play sessions longer than a few minutes. If you’re looking for a game that tells a good story in a unique manner, then definitely check it out. Otherwise, I can only recommend this game to the most dedicated fans of VR games. That would be someone who wants to try out everything for the sheer experience of being fully immersed in another world.

Arca’s Path is out now! Let us know what you think about it when you get a chance to play it. You can simply comment on this article, or check out one of our social media pages like YouTube or Twitter.

The PSVR version of Arca’s Path was used for this review. The game was played on a PS4 Pro.

Arca’s Path starts off quickly and doesn’t stop moving. Controlling a ball through Arca can become tiresome fairly quickly. If you have chronic neck pain, this game may not be for you. However, if you’re a big fan of VR you may want to check it out. Arca’s Path has a beautiful art style and a unique way of telling its story.