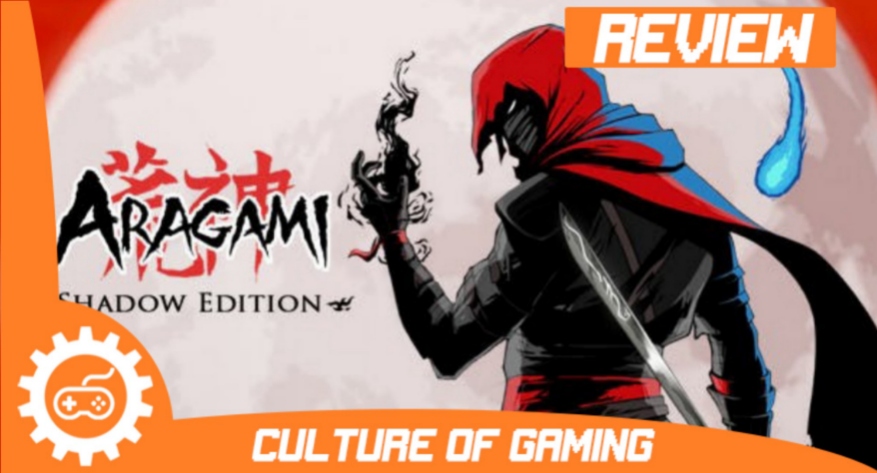 In Aragami, you take the role of an undead spirit of the same name. The game is a third person, stealth based action adventure. It also comes packaged with Aragami: Nightfall, a prequel of the story set just before the events of the base game. Instead of playing as Aragami, you instead play as Hyo or Shinobu.

The story of the game is simple. You are a spirit, summoned by a trapped woman known as Yamiko. As an Aragami, you are a spirit of vengeance. Your goal is to collect all Yamkio’s talismans in order to free her and the Empress. You do this by sneaking through multiple levels, either avoiding the many guards and hazards that exist, or by eliminating them one by one.

As you go through the story, you receive flashbacks of Yamiko’s past every time you recover a talisman. This slowly reveals more about the overall plot. The story is a nice telling of light verses dark, and the cycle of vengeance. Although it is fairly cliché, and the writing for dialogue is mediocre, it is good enough to get you from point A to point B. Getting a Ninja game that is heavily stealth based, instead of being a super high action game, is pretty rare.

The gameplay, when it comes to stealth mechanics, is near perfect. You can hop from shadow to shadow or create shadows away from you to help your movement. If you come to close to a powerful light source, it will drain your shadow essence. This will prevent you from being able to use your various abilities. You can also assassinate guards from behind or above, which assists in your ability to move freely.

It has some upgrade mechanics as well. You will unlock new abilities as you continue that will make avoiding and disposing of guards easier. To do so you have to find scrolls hidden throughout each level. The unlock menu is also on the pause menu, it isn’t explained very well where to find it, so try and remember that if you plan on playing.

Based on how stealthy you are, you’re also scored and graded. This assists the games replay value by giving players a goal to beat. No one wants to finish a level with a D. Yeah sure, you technically passed, but you can do better.

The combat however is very limited. If you’re looking for a game like Dishonored where you can fight your way to victory if caught, this game may not be for you. If you want to survive direct conflicts with guards, you need to be fast or flee. The guards use slashes of light that travel through air to kill you in one hit. They are also auto locked onto you. Fighting groups of enemies at once, directly at least, is impossible. Which is fair, as this isn’t meant to be that kind of game.

Unfortunately, this kind of makes the game bog you down after a while. You’re basically doing the exact same few tasks in environments that look just about the same. The game will have you finding something, going somewhere, or disabling something. That’s basically it for the approximately 10 hours it will take you to complete the game.

While you can find scrolls to upgrade and unlock new abilities, adding some diversity to the game play, it really isn’t enough to salvage the replay value for most people I would imagine. Plus, it has some lag issues to boot. Every time the game attempts to load something, so say after you die or enter a new area, there’s about five seconds where it looks like the game is about to crash. This happens nearly every time too. Fortunately, it doesn’t occur mid game when you’re sneaking past all the guards.

This is one area where I prefer Nightfall. Your abilities are all unlocked from the start, and it’s a bit shorter. The game is so fun from the start with unique abilities at your disposal. The downside to this is that both the characters you can choose to play as have the exact same move sets. It could have benefited greatly by giving them more unique abilities between the two. Would have also increased replay value by giving people a solid reason to play through twice if they enjoyed it.

Both modes also have multiplayer, which is basically the same game, but with a second person. It really helps speed the game up, while also making it more fun. I highly suggest finding a buddy to experience this with. Plus, you can see who the better shinobi is.

The art comes off as cell shaded. In general, this works very well. Aragami has a very cool design himself that changes based on the amount of light is on him. It looks sick. Yamiko looks good for the most part too. She looks like a ghost almost, which works well since she is technically projecting her spirit to guide you.

The not so great part of basically every character with a face that isn’t obscured by a mask, is their faces are bad. They barely look human, and the design in general clashes with the rest of the game’s artwork. It just does not work. The game also looks unpolished. Everything has very rough edges, this might be intentional, but it doesn’t look very good.

The world itself looks good though. Despite the entire game looking the exact same, even though you go to over a dozen different locations, the one design they have they knocked right out of the park. It would really benefit from a larger color palate though.

Most of the game is silent. Music really only exists on the title menu and loading screens, but even then, the tunes are very simple, and quiet. While it doesn’t have a strong soundtrack, the quiet is a good touch. It’s a stealth game, so this allows you to listen in on guards, and hear all your surroundings. Though it does add to the boredom if playing for long periods of time.

Voice acting is also bad. They took the route of having your characters speak, but nothing they say besides each other’s names is actually audible. It all sounds like a blur. Having no voice acting and just the dialogue on the screen would have been far preferred to this.

Overall, Aragami: Shadow Edition delivers what it sets out to. An immensely good stealth-based adventure. While the rest of the game isn’t anything spectacular, stealth fans looking for a challenge will find one with this game. If you’re unfamiliar with the genre, or aren’t too keen to it normally, the story and game play won’t be enough to make it worth it, and the art and music won’t be enough to keep you invested. And the price won’t help justify it for many either.

Aragami: Shadow Edition released for the Nintendo Switch on February 21st, 2019. The game was developed by Lince Works and published by Merge Games. Aragami will run you $29.99 for the digital and $39.99 for the physical.

Want to check out some more reviews? Than make sure to head on over to Open Critic!

Aragami: Shadow Edition feels like an unpolished port of a slightly above average game. Stealth fans will enjoy, but few others will.