5 FPS Mechanics That Shook Up The Genre 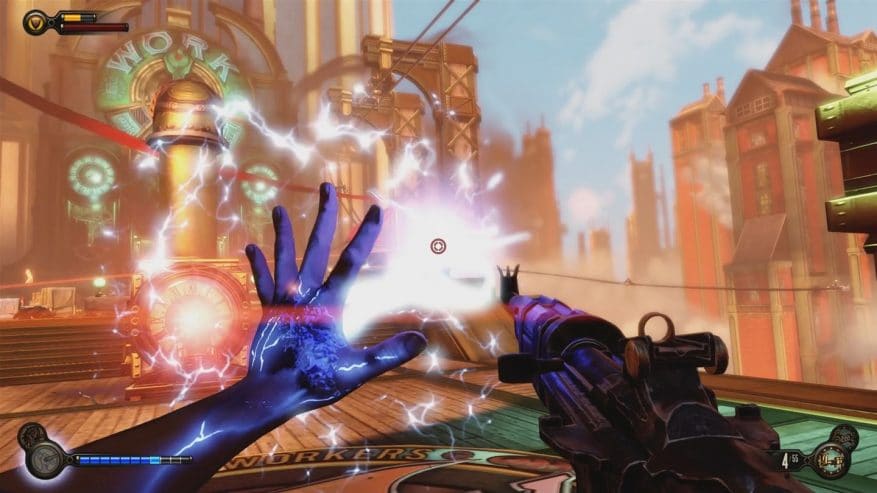 The year’s 1992; people love playing plumber plat-formers, fantasy RPGs, and point-and-click games. Little did everyone know that the entire gaming landscape was about to change. Wolfenstein 3D kicks the door in and revolutionises how games are played! iD Software had singlehandedly changed how video games were viewed (literally) and how they can be interacted with. First-Person-Shooters (FPS) were the next big thing. This genre would then lay claim to the industry for almost 30 years.

A while back we did an article on ‘the revamp model for FPS’, and this article is going to do something different by looking at some of the industries best examples of shaking up gamings biggest genre, instead of continuing it. We’ll dive into, in no particular order, five of the wackiest, most inventive, and entertaining ways developers have shaken up FPS games. Examining what impact these changes may have had. So come along.

I’ve been playing the original BioShock again recently. The games Plasmid system is something the industry takes for granted. Having another set of ‘magical abilities’ in tandem with your weapons might seem common place now (DisHonoured, Control) but 13 years ago it was incredibly subversive. After watching the Geoff Keighley led interview with Ken Levine and Shawn Robertson (which you can find here). I realised just how unique this mechanic was all that time ago.

The idea – of two radically different move sets – which interact with each other and the world in different ways, was totally new. You can zap water, melt ice, control enemies, even shoot bees! All of these abilities allow for gameplay experimentation, meaning multiple play-throughs are needed to explore every possibility. That idea, of using fantastical abilities in conjunction with traditional weaponry to explore the environments potential, was pioneered in Bioshock. Just remember: “Give ’em the combo: zap ’em then whack ’em. One-two punch! Remember, the one-two punch!”

Some of you might be thinking, Portal’s a puzzle game, what’re you thinking? Now that much is true, but we probably wouldn’t have levels like Titanfall 2’s “Effect and Cause” or games like Super Hot if it weren’t for Portal. Who would’ve thought that a 4 hour game packed into Valve’s The Orange Box as an experiment would’ve been a smash hit?

At its core Portal is a very simple game. All you do is shoot portals into walls and go through them, using them in a series of puzzle rooms until the game is over. But Portal proved something, it proved that even FPS games can be home to unique mechanics, clever design, and not just shooting. So whilst Portal itself isn’t an FPS game, its approach and unique design is something that most other single player FPS games have tried to emulate since. With some success.

Speaking of Titanfall 2. Now don’t worry, this isn’t going to be about the games time travel level. It’s actually going to be about Jack Cooper and BT-7274. Or Cooper and BT for short. Titanfall 2 does a rinse and repeat on the buddy mechanic present in games like The Last Of Us, God of War, and BioShock Infinite. Except this time you care about BT not just because he’s quirky and fun, but you are BT as much as you are Cooper.

Titanfall 2 built off the excellent mechanic of the first games online mode where Pilot and Titan are one. Both facets of the player interact with each other in a plethora of ways. You can ride the Titan, have it drop in whenever you want, have it function on its own, fight other pilots or Titans with it, or attack or defend Titans as a Pilot. The list goes on. But what does Titanfall 2 do that sets it apart then? It places all these mechanics into a meaningful story. All the Frontier and space war stuff is just set dressing for Cooper and BT. Whose characters and interactions work because of the story, not in spite of it. The mechanic of a Titan is the story as much as all the other details.

If BT learning to give a thumbs up doesn’t bring a tear to your eye, you haven’t played Titanfall 2 and definitely should.

If you’ve been around for the last few years, you’ll now that Destiny is huge in part to its gameplay loop of getting guns and grinding. But they didn’t do it first. Oh no. That honour is for Borderlands, one of my all time favourite franchises. Back in 2009 when the original Borderlands released you had your fair share of co-op FPS fun. You could play Call of Duty split screen online and scream at strangers. But Borderlands forced you to work together. If you wanted the reward of that sweet sweet loot you needed to overcome the tough-as-nails enemies and hope they dropped something. FPS games were introduced to something many PC gamers were familiar with, ‘the grind’.

For better or for worse ‘the grind’ is now a massive part of gaming. Playing with friends or strangers to get the best loot drops has become the norm. You can thank Borderlands for bringing that to FPS games.

No. I’m not baiting you. I’m deadly serious. I know it sounds insignificant but let me explain. Can you tell me which game did FPS leaning first? Was is Crysis 2? Or Killzone 2? Or even F.E.A.R? The online debate around it is impossible to pin down. As there are so many variations on the FPS lean/cover system an “original” is hard to come by. But just think about to for a second. How many games have you played where you could lean around a corner to aim and instantly pop back into cover again?

How much easier was that than having to move out, getting shot, moving back in? So much easier! I remember using it way back in Medal of Honour: Airborne and it being a lifesaver. Leaning seems like such an inconsequential thing, especially after shooters like DOOM dad away with it in 2016. Some say that having to lean forces the gameplay into slower, less fun, loops. Which to a degree is true. However it’s undeniable that leaning has had such a massive impact on how FPS games play for the longest time.

So that’s our list, do you agree? Let us know what you thought and what other mechanics shook up the FPS genre.