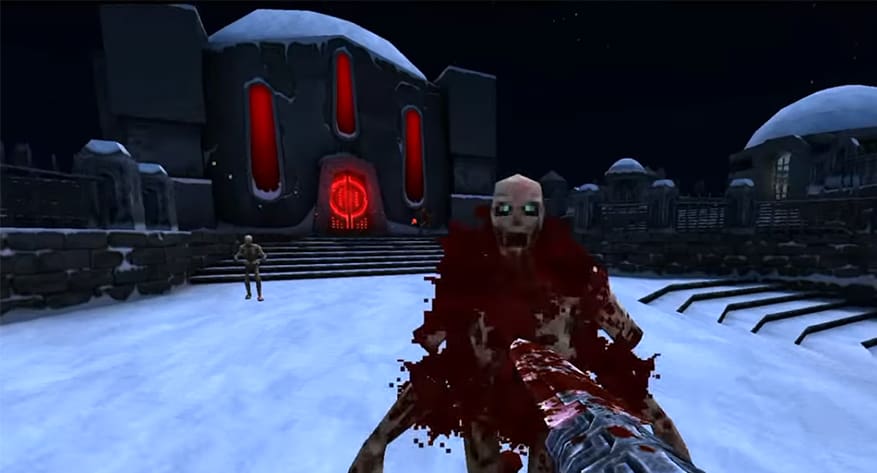 If you’re a fan of old-school shooters from the Quake and Unreal era of the 90’s, you should be delighted by 3D Realms’ next project. The original creators of the Duke Nukem franchise are making a throwback FPS called WRATH: Aeon of Ruin in the Quake engine. And yes, we mean the 1996 Quake engine. We’re talking old, old school here.

Atmospherically, the closest comparison we can make to WRATH is Doom, except with a fantasy-esque spin. The player fights the undead in a gothic, stone-built setting, with everything from shotguns to mini-chain-guns to (of course) chainsaws. We’ll let 3D Realms’ Steam page give the full-description:

“You are Outlander. Once adrift upon the Ageless Sea, you now find yourself on the shores of a dying world. From the consuming darkness emerges a figure cloaked in white, the Shepherd of Wayward Souls, who burdens you with the task of hunting down the remaining Guardians of the Old World. You must journey into the vast gloom to explore ancient ruins, discover forgotten secrets and battle the horrors that lurk within.”

Beyond the lore, Wrath’s dependence on the Quake engine gives it an aesthetic that we haven’t seen much of since the late 90’s. Of course, the limitations of that era’s hardware are gone. The game is cheekily capped at 666 frames per second. And of course, what would a Quake-style FPS be without the multiplayer? WRATH supports 4-player co-op, both through local LAN and online.

This isn’t 3D Realms’ first throwback shooter. Ion Maiden, released in early access last year, has a similar 90’s visual style, but with more of a sci-fi theme akin to Half-life or System Shock. It’s set to release on PC, Xbox, PS4, and Switch sometime in 2019.

For more on 3D Realms, FPS’s, and everything else video games, stay tuned to Culture of Gaming.